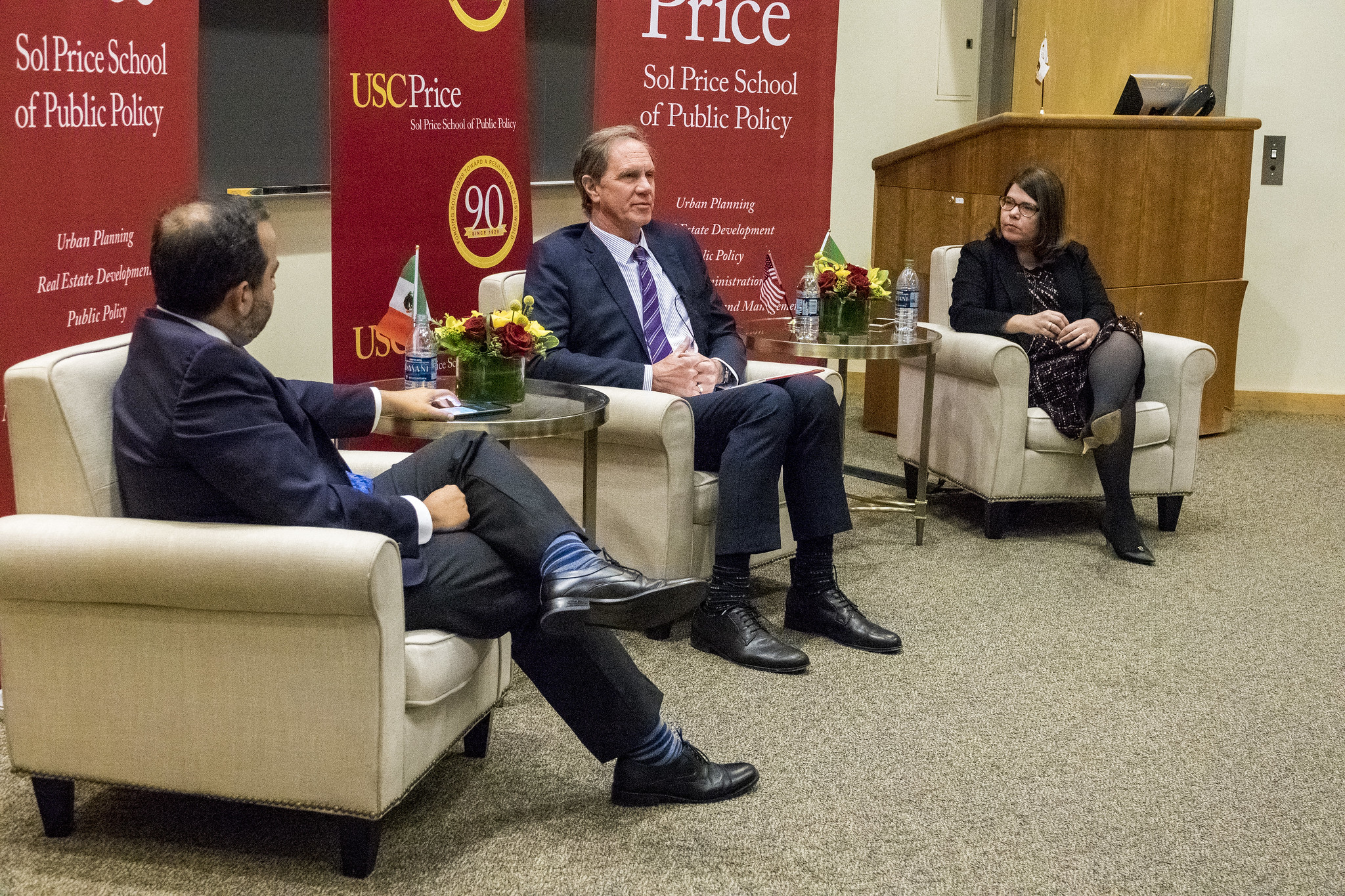 The panel discussion (Photo by Deirdre Flanagan). See all the panel and signing photos on Flickr

The evolving policy landscape in Latin America was the focus of a Feb. 26 USC Price 90th anniversary panel featuring two leaders in public administration training from Brazil and Mexico.

Prior to the discussion, a Memorandum of Understanding was signed by USC Price Dean Jack H. Knott, USC Vice President for Strategic and Global Initiatives Anthony Bailey, National School for Public Administration (Brazil) President Aline Soares, and Monterrey Institute of Technology and Higher Education (Mexico) Dean Alejandro Poire. The MOU is designed to enhance relations between the institutions in the areas of education and research.

The agreement of cooperation was another important step in the USC Price Latin American Initiative, led by the USC Price Office of Global Engagement.

“There’s been a real change in politics in both Brazil and Mexico, and I think it strengthens and heightens the need for our schools because we’re committed to open dialogue, conducting research, and applying knowledge to try to solve policy problems,” Dean Jack Knott said. “I think in the current political environment, including in the United States, this is a hugely important value, and one I really feel needs to be a bigger part of society.”

The discussion focused on the political landscape, public policy issues, changes in foreign policy, and the implications they have on the public policy and public administration vocations in each country.

There is a commonality for all three countries in the last presidential election cycle in that citizens hoped to “bring a new ingredient to the old political game,” as Saures said.

President Jair Bolsonaro of Brazil and President Andres Manuel Lopez Obrador of Mexico helped usher new political parties into power. Evangelicals and the military have a rising presence in the political systems of each country.

Poire attested that the President’s coalition in Mexico now has such a concentration of power that it has the possibility of changing the Constitution. The regime has taken to a thorough rejection of recent policies in the country, including Mexico’s leadership in the Paris Climate Agreement.

“There’s a big nationalistic component in energy, and the ultimate goal I think is the rebuilding of what I would call a hegemonic political coalition,” Poire said. “The ultimate goal is to try to bring Mexico back to the kind of non-competitive politics that were a feature of Mexico in the ‘60s and ‘70s.”

Saures noted that Brazil faces many challenges with social inequalities, poverty and education. There is an economic crisis in the country, with regressive tax rates and an unsustainable pension system in need of urgent reform.

Making Brazil a competitive country, she contends, takes will take institutional strengthening and capacity building throughout the governmental system.

Her school is responsible for working with all 22 ministries and regulatory agencies in the Brazilian central government to build capacity, and the importance of that effort is why she is pleased to partner with USC Price.

“There are many institutions today that have nothing to do with the role of the state that we want, and so the public administration has to be reformed,” Saures said. “I’m telling you right now, not only as a civil servant but as a citizen, it doesn’t have to do with just the executive branch. It has to do with the whole system, and something has to be done.”

Knott registered his surprise that these new executive regimes in Brazil and Mexico have more positive relationships with the U.S. and the administration of President Donald Trump than might be expected, particularly with Trump’s constant rhetoric on building a wall between Mexico.

Saures went so far as to say Bolsonaro and Trump are “in love with one another.”

“Our president is coming to the United States and has kept a lot of doors open in terms of cooperation in the areas of defense, trade and agriculture, which means that these doors will be more open than ever before,” Saures said.

Poire indicated that he thought Lopez Obrador was just trying to avoid conflict with the United States, consistent with this notion that foreign policy is not one of his priorities and is not going to be useful for his administration.

Poire stated that the challenge of a public policy school student is radically different today than perhaps only 10 years ago. Tec De Monterrey believes that technology and data analysis tools need to be at the forefront of making policy decisions, and a public entrepreneurship perspective is key to societal, economic and government change.

“We emphasize innovation and our ability to master technical change, and reinventing our ethical standards,” Poire said. “And we need to do it as quickly as possible, as collaboratively as possible, and beyond what we think are our resources right now. Otherwise, the whole project of democratic governance and access to opportunity for all will be a blip in the history of mankind, and we don’t want that to be the case.”

The panel discussion was held during the opening session of the USC Price course PPD 526: Comparative International Development.

“I follow both Mexico and Brazil’s politics because they’ve been developing so rapidly toward nationalism, as ours has,” said Kathleen Mitchell, a first-year Master of Planning student in PPD 526. “It’s always interesting to hear international perspective on how their policy and planning is created, but also how they’re handling in their countries this rising sentiment amongst their populations. A lot of politicians are capitalizing on it in those countries, and how that affects policy generation is going to be really critical in these next few years, as we’ve seen in our country ourselves.”

The course is taught by Prof. Eric Heikkila, who also serves as director for the Office of Global Engagement.

“I can’t think of a better way to begin to explore issues of comparative international development than to have the extraordinary special visitors that we have here today,” Heikkila said. “I found this very gratifying. At one time we’re exploring how deep the problems are and how daunting the challenges are. Yet, at the same time, I feel very inspired by these leaders who are helping to shape – not just through their own actions but through their institutions – how we collectively address them.”

“Congratulations to you for recognizing the opportunity for the Price School to engage in a really meaningful way in Latin America,” Bailey said to Knott. “USC is continuing to build on relationships with Latin America, as well as our schools, and the perfect representation of that is the Price School. These are three innovative institutions. I couldn’t be happier to hear these three institutions will be working together, and I think it’s really going to make a difference.”