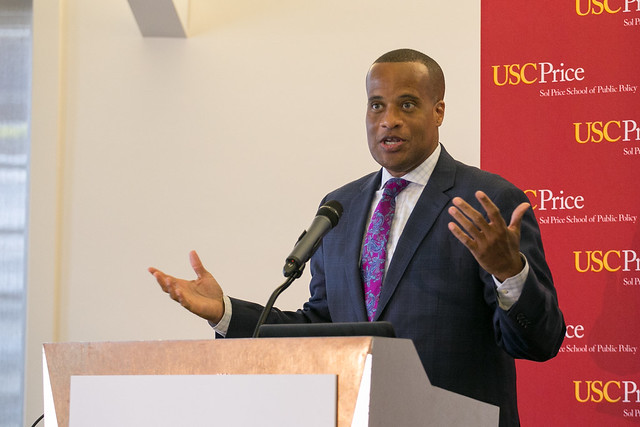 The Center for Economic Development at the USC Price School of Public Policy hosted the first Advanced Manufacturing Partnership for Southern California (AMP SoCal) Bi-Annual Meeting, bringing together government leaders and executives from companies in the aerospace and defense manufacturing industries.

Held at the California Science Center on Aug. 4, the gathering served as a way for AMP SoCal to touch base with its constituents two years after receiving a federal designation from the Economic Development Administration (EDA), a bureau within the U.S. Department of Commerce, to join the Investing in Manufacturing Communities Partnership.

“Manufacturing transactions in the aerospace and defense industries appear to be on the rise in Southern California,” said Leonard Mitchell, executive director of the USC Center for Economic Development. “The purpose of this meeting is to bring government and industry representatives together to exchange information. We’re introducing ourselves and telling people what we do, why we’re here and what we’re planning.”

Since its designation, AMP SoCal has helped create 4,347 jobs and retain 1,953 jobs within Southern California’s aerospace and defense sector. Its educational partners have trained nearly 1,500 workers in A&D skills and placed more than 300 of those students in manufacturing businesses throughout the community. And, it has been directly involved with increasing Southern California’s A&D sales and exports by $8 million.

“Our goals in the Southern California aerospace and defense manufacturing region are simple,” Libby Williams, project manager for AMP SoCal at USC CED, noted during the meeting. “They are to create and retain jobs, increase sales and exports, increase the number of small and medium manufacturers adopting advanced manufacturing technologies, and to train and educate the workforce with industry’s help. That’s the key. We’ve got to get your help to do this.”

Jay Williams, the U.S. Assistant Secretary of Commerce for Economic Development, called AMP SoCal one of the most productive relationships the EDA has had from the Investing in Manufacturing Communities Partnership designation.

“We’re exceptionally grateful for the work AMP SoCal is doing through the broad-based consortium of almost 90 dedicated organizations that have come together to help transform and advance the aerospace and defense industries,” Williams said. “This is why we continue to hold this region up. We also appreciate that you are willing to share the lessons to those communities that weren’t designated for the long-term benefit of the program.”

Williams noted that, since early in 2010, U.S. manufacturing has grown at a rate that hadn’t been seen in 25 years. He added that California is home to 17 percent of total aerospace production, with 80 percent of the state’s aerospace workers residing in the SoCal region. They have produced $31 billion worth of goods since 2011.

“We’re here today because manufacturing matters,” Williams said. “There have been a number of experts and pundits who over the course of the past several years have been ready and eager to write the obituary of U.S. manufacturing. But manufacturing, as much as it has been part of our history, remains a critical part of our future.”

Preparing for the future 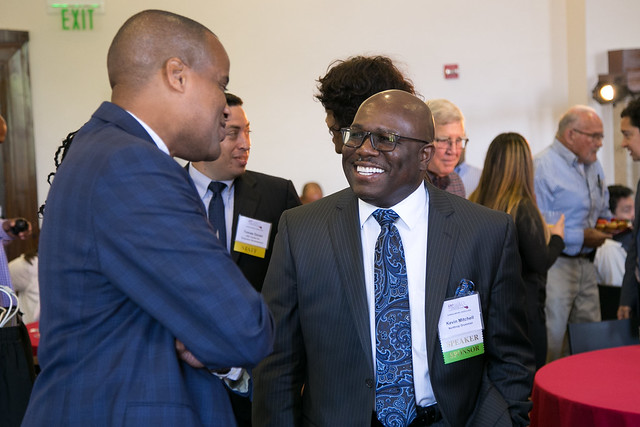 Although aerospace and defense manufacturing in Southern California is on an uptick, challenges loom.

“While there has been a renaissance in manufacturing; increased labor productivity, automation, consolidation of supply chain and outsourcing to a cheaper location has led to declines in employment,” explained Deepak Bahl, program director for CED. “And an aging workforce with a lack of succession planning is a problem. Southern California’s robust supply chain will be vulnerable.”

To address those concerns, the event included a keynote from Kevin Mitchell, vice president at Northrop Grumman, as well as a panel on Department of Defense efforts to assist defense manufacturing that featured Daniel Glasson and Mike Gilroy from the DoD Office of Economic Adjustment. Mike Quindazzi of PricewaterhouseCoopers presented research on the changing face of aerospace in Southern California.

AMP SoCal also took the opportunity to learn from its collaborators with an interactive townhall discussion and exploration of best practices within the region.

“It’s our job to improve the ecosystem for aerospace and defense manufacturing,” Mitchell said. “We’re exchanging information to better identify the areas within the aerospace and defense environments that can be improved, so that we can better sustain and increase job production in Southern California.”