AMP SoCal has helped create 5,154 jobs and retain another 2,630 jobs across region’s aerospace and defense sector. 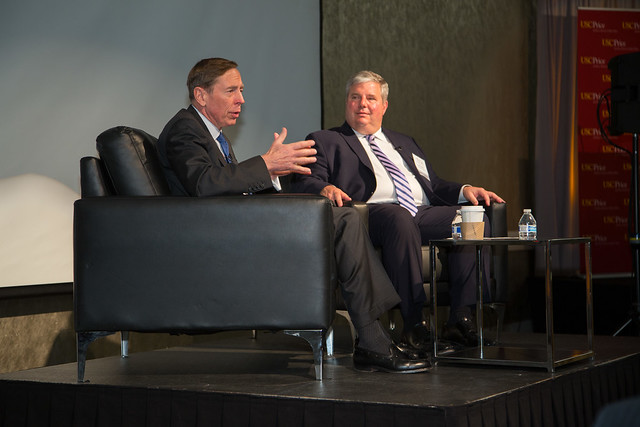 General (ret.) David Petraeus thanked executives in the aerospace and defense manufacturing industries for their innovation during his remarks as a featured speaker for the second Advanced Manufacturing Partnership for Southern California (AMP SoCal) Bi-Annual Meeting, hosted by the Center for Economic Development at the USC Price School of Public Policy.

“AMP SoCal clearly is a very important endeavor, and one of the reasons I’m here is to help recognize that and spur you on, to remind you of the visits I used to make out here when I was a four-star general and director of the CIA, and to ensure you it wasn’t just for the weather,” said Petraeus, a USC Judge Widney Professor with a joint faculty appointment at the Price School. “We were looking at some very interesting products manufactured in this region… all of which have contributed enormously to what we’ve done in the battlefield, what’s going on in space and in the intelligence community.”

Held in March at the California Science Center, the event is a way for the USC Center of Economic Development (CED) to connect with AMP SoCal members, provide valuable information from expert panels, and explain the work it is doing to strengthen the local industry. 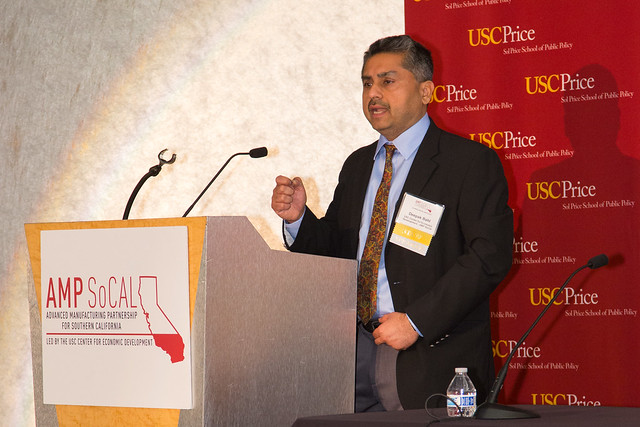 In 2014, CED and the City of Los Angeles joined forces to receive a federal designation from the Economic Development Administration (EDA), a bureau within the U.S. Department of Commerce, to start AMP SoCal as part of the nationwide Investing in Manufacturing Communities Partnership. Last September, this designation was extended for an additional two years. “As a university, we are very happy to be part of this public-private partnership,” said Neeraj Sood, vice dean for research at USC Price. “It’s consistent with the mission of our school, which is to improve the quality of life for people and their communities. We think a thriving A&D industry will help us meet this mission because it’s going to make our nation safer, enrich our communities through better economic opportunities, and support technical innovation and change.”

AMP SoCal has helped create 5,154 jobs and retain another 2,630 jobs within Southern California’s aerospace and defense sector. Its educational partners have trained 1,900 workers in A&D skills and placed more than 300 of those students in manufacturing businesses throughout the community. And, it has been directly involved with increasing Southern California’s A&D sales and exports by $15 million.

“AMP SoCal has been a catalyst in forging public-private partnerships, mobilizing ideas and leveraging private-sector investments,” said Deepak Bahl, program director at CED. “AMP SoCal’s accomplishments are a testament to the hard work and resilience of our AMP SoCal partners, which have grown from 85 to more than 135.” 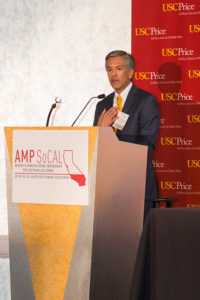 Thomas Guevara, deputy assistant secretary for regional affairs at the EDA, brought up the challenges manufacturing is facing. The industry’s contribution to the U.S. gross domestic product has been declining due to lower labor costs in other countries, globalization and technology. Supply chains have consolidated, and jobs are being lost to automation.

“In order to really do the kind of work we want to do in terms of restoring manufacturing, we have to develop a series of polices that are going to be customized to the places, assets and activities going on at these 24 manufacturing communities across the U.S., of which by geography and population AMP SoCal is the largest,” Guevara said. “Sorting out the data so that we can utilize it to create better policies is an incredible challenge, and that’s why universities are critical to supporting the manufacturing communities.”

The meeting featured panel discussions on changes in A&D, Industry 4.0 and the “smart factory,” new paths to growth, and aerospace supply chain competitiveness. 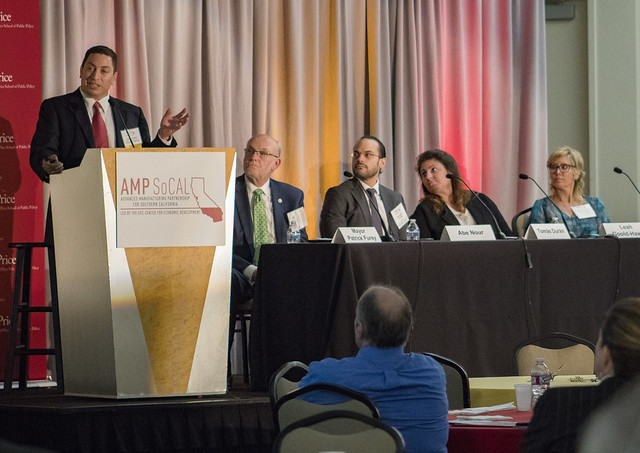 Keynote speaker Ken Shaw, vice president of supply chain for Boeing Global Services, asserted that although there is a perception of doom and gloom across the aerospace sector, it is projected to be a $7.5 trillion market over the next 20 years.

Boeing alone has more than 300 suppliers in southern California, spending about $7 billion a year in the region. He noted that being a Boeing supplier requires 100 percent quality, 100 percent delivery, and the cyber security of a company’s factories and offices.

“Let’s not forget what we do every day,” Shaw said. “We put the men and women of our armed services in harm’s way. Every time they launch an airplane, our job is to make sure they come back secure. And think about commercial air travel. Many of you probably traveled yesterday. Did you worry about the safety of what you were flying on? Probably not, because it was designed and produced by the best minds in the world.”

Shaw led the discussion with Petraeus, who said that the advanced manufacturing industry needs to prepare workers for Industry 4.0. He cautioned that this industrial revolution might be different from the previous three, in which displaced workers were able to switch from one pursuit to another.

“The fact is that manufacturing is back,” Petraeus said. “It’s been back. We’re at the highest output of manufacturing in American history. The problem is the jobs haven’t come back with that. Robots and automation are taking over what used to be repetitive manual labor tasks from workers. We need to be prepared for further erosion of these kinds of jobs. This is where the education component comes in, so workers are prepared for that world.”