Marking the 25th anniversary of the L.A. civil unrest, four USC research organizations co-hosted a two-day conference bringing together academics, activists, community members and artists to explore the changes that have taken place in Los Angeles since 1992, as well as the additional work needed to realize a just and inclusive future.

“Forward LA: Race, Arts, and Inclusive Placemaking after the 1992 Civil Unrest” took place on April 27-28, and was co-organized by the Sol Price Center for Social Innovation, the Spatial Analysis Lab (SLAB) at the USC Price School of Public Policy, the USC Program for Environmental and Regional Equity (PERE), and the USC Race, Arts and Placemaking (RAP) Faculty Collaborative.

“In the 25 years since the L.A. civil unrest, we’ve made progress but it’s become painfully clear that we still have a long way to go,” USC Price Dean Jack H. Knott said. “We still face some of the same issues that fueled the unrest a quarter century ago – disparities in housing and health care, lack of economic and educational opportunity, violence and crime, distrust and antagonism between the community and law enforcement.” 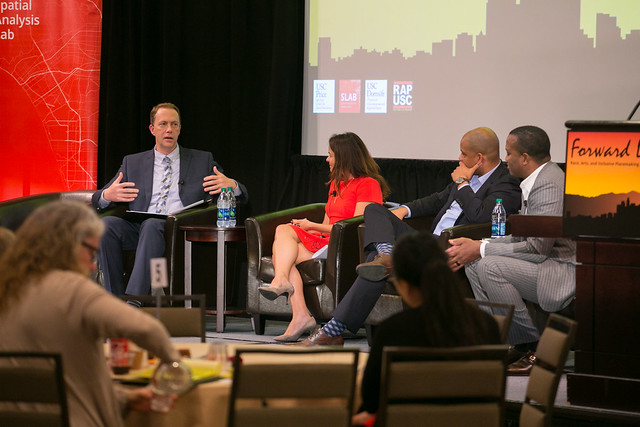 Painter moderates a panel on “Data as a Driver of Social Innovation.” (All photos by Tom Queally)

Professor Gary Painter, who directs the Price Center for Social Innovation, noted that although the civil unrest was sparked by the acquittal of the three LAPD officers involved in the beating of Rodney King, the tensions that led to that moment had been simmering for years. In the 25 years that followed the civil unrest, however, Los Angeles has made progress toward building a more inclusive city.

“Now, Los Angeles is moving forward toward a vision for a shared destiny in which Angelenos work together to support programs and policies that benefit the region as a whole, rather than specific populations,” Painter said.

The first day of “Forward LA: Race, Arts and Inclusive Placemaking after the 1992 Civil Unrest” focused on the demographic changes, innovative policy models, community organizing and use of local data to support the evolving landscape of the city.

USC Price Professor Dowell Myers presented data on L.A. County population trends. The population grew by 1.4 million in the 1980s; much of the growth was in the Latino population as immigrants came for job opportunities. But employment turned downward in 1991, and unemployment rates were twice as high for African-Americans. All of this put tremendous pressure on the population.

The flow of immigrants peaked in 1990 and today is back to 1975 levels. The foreign-born population has leveled off, and it’s the children of those previous immigrants who are essential to balance out the skyrocketing senior ratio as baby boomers cross age 65.

“Now is the time L.A. can truly become great if we invest in our young people,” Myers said. 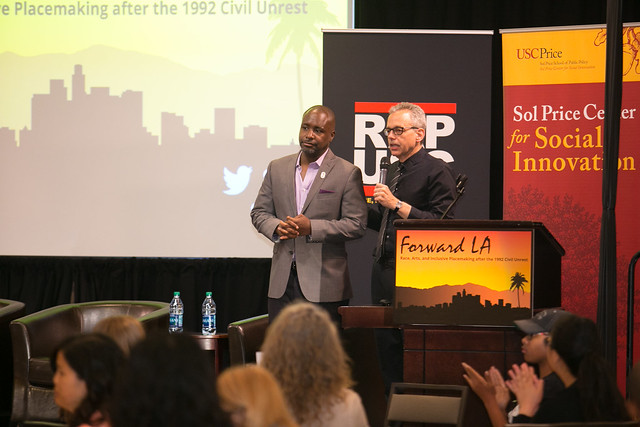 In his keynote address, Los Angeles City Councilmember Marqueece Harris-Dawson expressed that the police and the people have changed.

“The police still have a lot of problems in Los Angeles and beyond, but the LAPD is nothing like it was in 1992, ’82, ’72 or any time in its history,” Harris-Dawson said.

Now he sees a department that embraces community policing, pointing to the Community Safety Partnership that began in housing developments and will soon be introduced at a park in South L.A.

Harris-Dawson asserted that the people of South LA have had to rebuild on their own because businesses haven’t invested in the area.

“The same unspoken, implicit racism is still there and still rears its ugly head almost every time the issue of economic development and real estate development comes up in our community,” Harris-Dawson said. 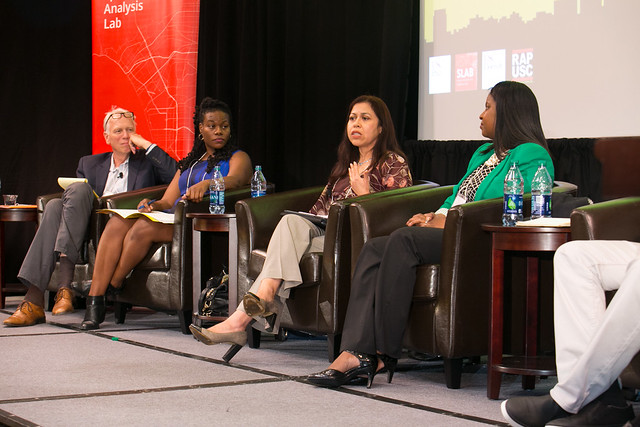 Panel on efforts toward socially just and economically prosperous future for L.A.

In a later discussion of South L.A., USC Dornsife Professor Manuel Pastor noted that the region – despite its challenges in reducing poverty – maintains a tremendous pride of place.

In recent years, Los Angeles has received two federal “Promise Zone” designations, including South L.A. The Price Center for Social Innovation serves as an academic partner for both Promise Zones.

“We are an organizationally rich community because of the investments that have happened since the riots, and it all does come back to the riots,” said Laurence B. Frank, president of Los Angeles Trade-Technical College. “Some of the most important organizations came out of the cradle of the L.A. uprising.”

What do neighborhoods need to thrive?

The Price Center for Social Innovation also previewed the new Neighborhood Data for Social Change (NDSC) platform, which will allow nonprofits, advocacy groups, government agencies and the public to access reliable, aggregated data at the neighborhood level. Los Angeles has long suffered from a lack of coordinated, user-friendly census-tract level data. With the new NDSC platform, L.A. will join dozens of other metropolitan cities in their efforts to use neighborhood-level data for community building and local decision-making.

The preview of the NDSC platform – and the broader discussion of data as a tool for neighborhood opportunity and empowerment – led to panels on how policies can be developed to ensure that no neighborhood is devoid of the necessary characteristics for families to thrive, and data as a driver of social innovation.

“One of the big components of open data is really trying to do civic engagement, and not engage just your traditional researchers and journalists who use a lot of government data for accountability purposes, but really engage the community,” Coral said.

USC Price’s Dana Goldman and LaVonna Lewis were among the participants in a panel on health disparities.

“Before we demonize people for making bad choices, we need to really do a good job understanding what those choices are,” Lewis said. “If I’m in a toxic place, it’s not fair to put the same set of expectations on me that you would put on somebody in West L.A.”

Health disparities often come down to food justice, which was a central topic in the conference’s second day, which focused on arts, music, cinema, food and culture in rebuilding L.A.

Mark Glassock of the LA Neighborhood Land Trust contended that there is a 12-year life-expectancy gap between people living in Watts and Bel-Air.

“In the years that followed [the civil unrest], not only did the inability for some people to get enough food continue, but food insecurity broadened with the extraordinary expansion of fast food and other bad foods, leading to overweight and obese populations facing adverse health outcomes,” said USC Price Professor David Sloane.

Chef and entrepreneur Roy Choi joined by his LocoL staff

In the keynote address of the second day, chef and entrepreneur Roy Choi talked about his efforts to revolutionize inner-city fast food with his Watts restaurant, LocoL, which just the night before The Los Angeles Times had named as its 2017 restaurant of the year.

Choi said it was the 20-year anniversary of the civil unrest that sparked him to create LocoL, providing local jobs and healthier ingredients in traditional fast-food fare. Sharing the stage with his LocoL staff members Carnisha Coleman, Keith Corbin, and Lydia Friend, Choi shared how they invested in developing their friendship for years before opening the store. Learning more about the community influenced the design and menu of the restaurant.

“The mentality behind the store is to run it like it’s the most successful, profitable store in the world,” Choi said. “I want it to be like money is falling out the windows, because the more money we make the more money goes back into Watts. I’m never going to take a penny from that store.” 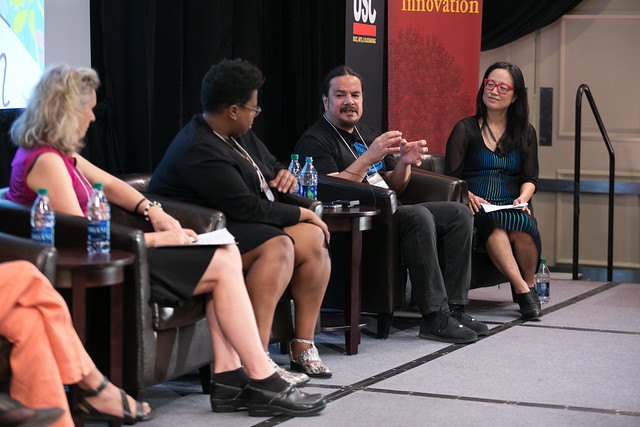 The second day was filled with artists and cultural entrepreneurs. “Especially for communities of color or, more generally, marginalized world-weary souls, the arts can provide moments of expressing our full humanity,” said USC Price faculty member Annette Kim, a principal investigator of USC RAP and director of SLAB. “We don’t want to lose that alchemy in this conference by only talking about the role of art in society, so we’re filling the day with art itself.”

With compelling slideshows of art work as a backdrop, a panel of artists and museum curators discussed the strategies they use to de-segregate art in Los Angeles by bringing art into different neighborhoods as well as diversifying the art that is shown in traditional museums. An especially hot topic was how art might raise a community’s value to the point of displacing them with rising rents.

Attendees of the closing panel were rewarded with rousing musical performances. Leila Steinberg, the former manager for Tupac Shakur, presented young local artists from her nonprofit, Aim4theHeArt.org, who sang, rapped and delivered spoken-word poetry on topics related to their urban experience.

Painter concluded the conference by saying: “The vision we have out there of an inclusive and just Los Angeles which can be a model for the rest of the country has not happened, and it’s our job as academics to do what we can – and your jobs as members of your communities to do what you can – to tell those stories and make the invisible visible.”

Videos, slideshows, and music playlists of the conference can be reviewed on the SLAB website: http://slab.today/2016/11/rap-conference/

Zocalo Public Square published an op-ed by USC Price professors Roberto Suro and Gary Painter on how integration and diversity have evolved in Los Angeles since the 1992 Los Angeles riots. “Los Angeles was a city of contested spaces and tribal rivalries 25 years ago. It’s not that now,” they wrote. The story also noted an event hosted by USC Price and USC Dornsife College, “Forward LA: Race, Arts, and Inclusive Placemaking after the 1992 Civil Unrest.” The story was also published in the Chicago Tribune.

Salon highlighted the Price Center for Social Innovation as a co-organizer of the “Race, Arts and Inclusive Placemaking After the 1992 Civil Unrest” conference.