From rights to race, symposium looks at local, global issues of street vending 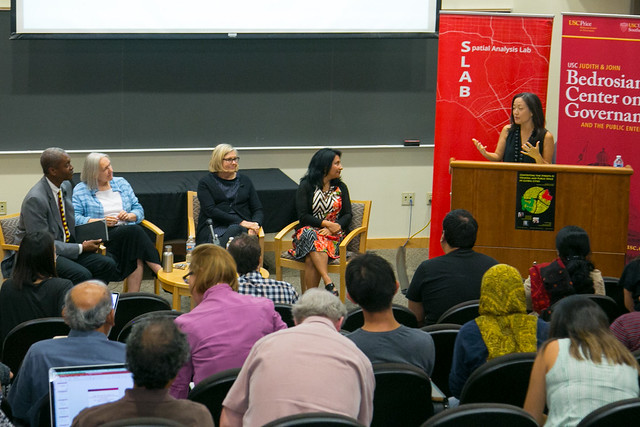 A worldwide growth in street vending has sparked controversies regarding the right to public space, arbitrary enforcement, right to livelihood, and treatment related to immigrants and race. As a result, a sometimes acrimonious debate has taken place among various stakeholders — including vendors, local government, formal businesses and property owners, community organizations and pedestrians.

The Bedrosian Center on Governance and the Spatial Analysis Lab (SLAB), both housed within the USC Price School of Public Policy, in collaboration with UCLA’s César E. Chávez Department for Chicana/o Studies, brought together an international group of scholars and practitioners for a two-day symposium held at USC on Oct. 2 and 3, titled “Contesting the Streets II: Vending and Public Space in Global Cities.”

“The Bedrosian Center is very pleased to participate in this conference, as the issues of street vending touch on policy formation, enforcement of rules and laws, organizing, and public-private partnerships, among other issues,” said USC Bedrosian director Raphael Bostic. “These are all central issues to governance.”

Street vending is becoming an urgent issue in Los Angeles, where the City Council is currently considering whether to lift a ban that affects the way of living for some 50,000 people. But many cities around the world are facing the same considerations.

The first “Contesting the Streets” symposium occurred five years ago at UCLA in partnership with USC, an event which SLAB director Annette Kim attended and called hugely influential for her.

Kim recently had her work on the sidewalks of Ho Chi Minh City in Vietnam exhibited on campus.

“One thing we wanted to do differently with this second conference was to expand to a global perspective, because street vending controversies are happening in cities all around the world,” Kim said. “Even though they’re in such different places, the way the phenomenon is framed is surprisingly homogenous.”

More photos from the event are available on Flickr.

In three keynote presentations during the opening day, UCLA Professor Ananya Roy discussed the Chicago anti-eviction campaign in her talk “The City as People’s Territory: Revisiting Urban Informality,” while UC Berkeley Professor Margaret Crawford addressed the struggle for social justice in public space with her talk titled “From the Feel Good to the Just City,” and Columbia Professor Saskia Sassen spoke on “The Global Street: Why Intermediate Space Matters.”

Crawford said that addressing the differential treatment of people of color and immigrants in public spaces needs to be at the forefront of all public space discourse. New York tried to re-imagine the streets for pedestrians and cyclists with former Mayor Michael Bloomberg’s public space initiative, but at the same time ushered in a “Stop and Frisk” policy that allowed the NYPD to stop, question and search any suspicious pedestrian, leading to 700,000 people – the vast majority of which were African-American or Latino males – being stopped in 2011 alone.

“To these citizens, literally being on the sidewalk made them into potential criminals,” Crawford said. “This demonstrated just how easily feel-good spaces can coexist with policies that essentially deny the right to be in other places to large numbers of the public.”

Day two of the conference featured paper presentations and panel discussions on a variety of topics.

During the session on “Street Vending Struggles Over Time and Space” – moderated by Kim – Sally Roever, urban research director for Women in Informal Employment: Globalizing and Organizing (WIEGO), detailed data from a survey of street vendors in 10 cities around the world. Most striking was that all these cities had different sets of local bylaws and urban policy, yet the survey results were extremely similar.

The report found that earnings generated by street trade are the main source of household income in most homes of the respondents, 62 percent had no alternative income source and only 20 percent had someone in the household with access to health insurance. Problems most often cited by the street vendors included the security of vending site, harassment by police, confiscations of goods and evictions.

The informality of street vendors is in natural opposition to urban planning, but University of New Mexico Professor Renia Ehrenfeucht indicated that this doesn’t have to be the case.

“Maybe we can more actively plan for vendors,” Ehrenfeucht said. “If you have a trash problem, provide trash cans to sort out the situation rather than hanging it on the vendor.”

Discussant Gregg Kettles, former Deputy Counsel for Los Angeles Mayor Antonio Villaraigosa, questioned the lecturers on whether formalization was the right path for street vendors, noting that perhaps rules, regulations and taxes could damage the industry.

“Formalization gives them the feeling of safety,” Roever responded, citing information from the WIEGO report. “They have basic rights. Maybe in the L.A. movement, you can find a way to have voices of street vendors on what they think formalization should mean.”

At a global session, titled “The Politics of the Public Imagination around Street Vending” – moderated by Bostic – Darshini Mahadevia from CEPT University at Ahmedabad, India, and Lissette Aliaga-Linares from the University of Nebraska at Omaha discussed street vending laws in India; Lima, Peru; and Bogota, Columbia. Mahadevia noted that India has progressive legislation and high-court rulings regarding street vending, but they are not being followed. Evictions continue, and vendors have to pay protection money or get harassed.

“I would argue the two sectors represent more of a continuum than dualism that has increasingly become more and more interconnected in the new global economy,” Banerjee said.

At the conclusion of the symposium, when all speakers and discussants gathered for a discussion, USC Price Professor David Sloane observed, “Somehow in the global liquid economy, the vendor is back. And while vending was viewed as really ‘bad’ in the modern city, now, surprisingly, they are also being viewed as an amenity that leads to urban vibrancy.”