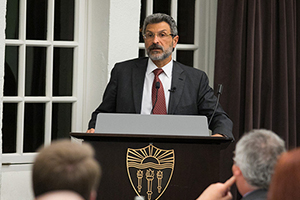 “I lived as a minority all my life, and as a result, I know how it feels,” Haddad told the graduates of the Ross Minority Program at the USC Lusk Center for Real Estate. Haddad shared these remarks as the keynote speaker at the program’s graduation reception on Feb. 2 at the USC University Club.

Founded in 1993, the Ross Minority Program in Real Estate started as a way to contribute to rebuilding after the Los Angeles civil unrest. In 2003, a gift from Stan Ross, a member of the USC Price School of Public Policy’s Board of Councilors, and his wife Marilyn made the program a permanent institution. The program’s intensive two-week or four-week sessions aim to promote responsible development in underserved urban communities, and to diversify the leadership in real estate — an industry that remains predominantly male and white.

“I saw places where minorities were facing a concrete ceiling,” said Haddad. “And as much as we have issues, this country has made a huge amount of advances in that way. And yes, we have a lot to work on. But where you go is up to you. The sky is the limit. I stand in front of you as proof of that.”

Shaped by the past, ‘passionate about building communities’

Haddad arrived in the United States as a 27-year-old with little in his pockets — and today, he is the chairman and CEO of FivePoint Holdings, LLC, the largest developer of mixed-use communities in coastal California. He also serves as chair of the Lusk Center’s Advisory Council, and is a member of the USC Price Planning Program Advisory Board and a supporter of the school’s Diversity in Planning Program.

“When I first came to this country, we came as a family with nothing,” he said. “I used to wake up every morning worried to death that I’m going to be laid off that day, because my family is going to be homeless. So that fear – of making sure that the people I care about most were taken care of – was what drove me every day. As I got past that, I started realizing that by living 11 years in civil war, that left a scar — a scar of seeing communities being torn apart, families torn apart, friends torn apart. I started realizing that really what I have is a passion for building communities.”

To that end, FivePoint is designing and developing the nationally-recognized Great Park Neighborhoods with 9,500 homes and five million square feet of commercial office and retail space on the former El Toro Marine Corps Air Station in the heart of Orange County. As part of this Irvine community, FivePoint is building world-class amenities, including a sports park with stadiums and fields that is nearly two times the size of Disneyland, and a 12,000-seat amphitheater for outdoor music and entertainment. The company also owns and is developing Newhall Ranch in northern Los Angeles County adjacent to Valencia, and The San Francisco Shipyard and Candlestick Point in the city of San Francisco

Reflecting on FivePoint’s impact on California, Haddad noted: “We do what we do for people.”

Looking ahead, he foresees major disruptions and paradigm shifts in the real estate industry. He believes that current zoning codes could become obsolete as commercial and residential developments intermingle, and that policymakers need to keep pace with the rapid changes driven by private industry.

“More than ever,” he said, “the Ross Minority Program and the Price School of Public Policy are needed.”

Ready to turn knowledge into action Throughout the graduation reception, the 16 Ross Minority Program participants celebrated and reflected on the value of their experience.

Many students underscored how much they learned about finance, development, site planning, market analysis and other aspects of real estate.

“The structure of the program is such that you get somewhat of an introduction to a broad range of topics that all affect real estate,” said Kevin Clausen-Quiroz, a project manager in the City of Anaheim Community and Economic Development Department. “And so I have more of a knowledge of what I don’t know, and I want to dig deeper now.”

For Lizzet Alvarez, the program was a way “to learn the lingo and learn the math” in preparation for launching an affordable housing development company with her husband.

“Especially when it comes to affordable housing, in that arena, there’s so much complexity with funding, with financing,” she said.

“It was really interesting to see how complicated the process is, and to understand the different perspectives,” said Wackenhut Lomeli.

Rodriguez added, “Professor Richard Green’s and Professor John Loper’s lectures were some of the most helpful — really teaching us how to build pro formas and these macro real estate concepts.”

Some participants were so impressed by the program that they’re now considering pursuing the Dollinger Master of Real Estate Development (MRED) degree at the Price School.

“Everybody talks about USC,” said Andrew Martinez, an associate at Sperry Commercial Global Affiliates. “The program was a really great introduction to how great the community is and how great the professors are.”

André Bueno, principal at the Bueno Group, also plans to apply to Price’s Dollinger MRED program. “Being able to see everyone’s perspectives has made me a lot more well-rounded,” he said. “And I feel, because of that, I would really benefit by being in a more formalized master’s program.”

Carrying on the Trojan family legacy In addition to getting to know their peers and professors, the participants were inducted into the extensive network of nearly 1,000 alumni of the Ross Minority Program.

“I think the alumni connections are going to be the most valuable piece,” said William Hicks III, a loan officer assistant at HomeStreet Bank.

As an alumnus from the first graduating class in 1993, Michael Banner attended the event and has championed the Ross Minority Program for years — recruiting and mentoring participants, fundraising and helping in any way that’s needed. This year, he also served on a judging panel, providing feedback and selecting a winner from among the final student projects and presentations.

“I love this and the things it has done for me in my career professionally,” said Banner, president and CEO of the Los Angeles LDC. “And as a way for me to give back and promote diversity in the real estate business, it’s fantastic.”

Of course, the impact of the Ross Minority Program extends far beyond those who work in real estate.

“This program is important to its participants and to the Price School, but what it’s really important for are the communities in which they work,” said USC Price Dean Jack H. Knott. “That’s where the program makes a difference, and that’s what I’m most excited about.”