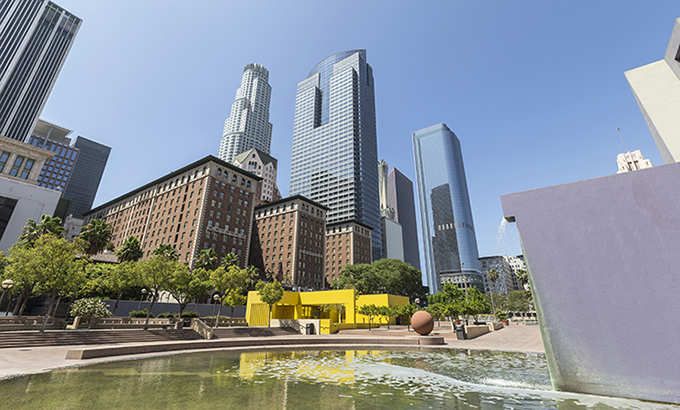 In January, Meredith Drake Reitan participated in the second annual Women’s March Los Angeles, joining hundreds of thousands of people as they demonstrated their way from Pershing Square to the rally at Grand Park outside City Hall.

Eight years earlier, she completed a dissertation focusing on 100 years of planning Los Angeles’ civic space to earn a Ph.D. in Policy, Planning and Development from the USC Price School of Public Policy. Experiencing this energy in L.A.’s civic center renewed her interest in the area.

“I had a weird revelation that it matters again — this public space has come back to be meaningful to citizens in Los Angeles,” said Drake Reitan, who also holds a Master of Planning degree from USC Price in 2004.

Now an associate dean at the USC Graduate School and an adjunct associate professor at USC Price, Drake Reitan decided to get back to writing a book on the history of the Los Angeles civic center, a journey that will take her to Cornell University this fall.

She has been awarded the John Nolen Research Fund, which provides financing for scholars interested in conducting research in the John Nolen Papers and allied collections in the Division of Rare and Manuscript Collections of the Cornell University library.

Interestingly, the key to the history of planning in Los Angeles is located near the north-eastern edge of the country.

Cornell houses the Gordon and Brysis Whitnall papers, about 25 boxes worth of records kept by the first city planning director of Los Angeles. Whitnall also founded the Los Angeles City Planning Association in 1913, and he taught urban planning courses at USC dating back to the 1920s. At some point in the mid-20th century, a Cornell professor and planning historian went around the U.S. collecting planning records, including the Whitnall archive.

Drake Reitan hopes to find records of Whitnall’s thoughts and ideas about the Los Angeles civic center to get a big-picture view of the early years of planning in the city, as well as perhaps unpublished planning documents.

She expects Whitnall to be a major figure in her book, which will disprove the cliché of Los Angeles as an unplanned city. More than 30 different plans were prepared for the Los Angeles civic center during the 20th century, with some of the country’s most well-known architects and planners contributing buildings or designs for its development.

“All of these moments in L.A. civic culture are increasingly happening downtown, a place that 10 or 20 years ago most people would have said was just dead,” Drake Reitan said. “When you look at a single space over time, it tells you the story of what mattered most at that particular moment.”

Drake Reitan already has conducted research for the book at USC, UCLA and the Huntington Library to illustrate the history of Los Angeles through the completed and unsuccessful development attempts in the civic center through the years.

“This is the story of all the people that wanted L.A. to be a single centered city,” Drake Reitan said. “They lost, but it’s a good story.”