Over its 20-year legacy of promoting professional and intellectual growth while advancing an international perspective on social sectors, the International Public Policy and Management (IPPAM) program at the USC Price School of Public Policy has served as a springboard for many global leaders.

USC Price’s mission is to improve the quality of life for people and their communities here and abroad, and IPPAM has been a signature program for the school in the way that it fosters international collaboration and cross-cultural understanding.

IPPAM has produced 600-plus graduates from more than 30 countries who work at high levels in government, nonprofit and business. These alumni – including the eight highlighted below – illustrate the professional capacity IPPAM has built worldwide in all sectors. In 2011, Jenny Lau founded Sino Jet, which manages the jets of prominent clientele. From its start as a small company, the Hong Kong-based Sino Jet has now grown into the third-largest aircraft management business in China, with more than 30 jets in its fleet.

After earning her bachelor’s degree at the USC Marshall School of Business, Lau returned to China to work for Microsoft. She decided to return to school with the thought of transitioning to an NGO, and pursued the IPPAM master’s degree at USC Price.

“I felt kind of lost when completed undergrad and joined the workforce,” Lau said. “The IPPAM program felt like a family, with professors from both the private and public sectors to share their experiences and guide you to which way you should pursue.”

That time of self-discovery led her back to the private sector with Morgan Stanley, where she built the relationships to found Sino Jet.

In managing the jets of its clients, Sino Jet handles permits, hires pilots, mechanics and flight attendants. It does the work of an airline, but has to be ready for spontaneous flights to unusual locations at a moment’s notice.

As Sino Jet’s president, Lau has expanded operations by leading the acquisition of four jets of its own and commencing a charter option. A travel agency component designs specialized trips for clients, such as seeing the great migration of animals in Africa or a visit to Antarctica.

An industry trailblazer, Lau serves as the first female chairperson of the Asian Business Aviation Association in its 18-year history. In that role, she has made use of the public policy training she received in IPPAM to successfully influence change to several Chinese policies that were restrictive to aviation business, including lowering the processing time for private jet permits from three days down to one.

China Daily recognized Lau’s accomplishments by putting her on its list of 100 prominent overseas leaders. 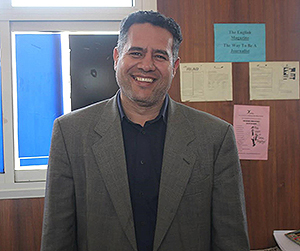 After having worked as a teacher for 10 years in Egypt, Yasser Ali came to IPPAM to gain an international perspective on educational policies and administration with the goal of returning home and taking a leadership role in reform.

Today, he serves as the principal of the Elsherouk Branch of Futures High School, a private school in Cairo. It’s a role he doesn’t think he would be excelling at without the skills developed at IPPAM.

“To be a good school principal, you need the technical skills that I gained from teaching, as well as the managerial and leadership skills that I got from IPPAM,” Ali said. “Studying at IPPAM taught me how to mobilize people and resources to achieve targets and goals. We were trained on the complex problems of our world that have great impact on people’s lives everywhere.”

Ali valued the level of support and care he received from IPPAM staff, which he is striving to recreate at his school. One of the main elements of study at IPPAM is working in teams, which Ali attests is uncommon in Egypt.

He trained his staff on the principles of teamwork, changing the way general school tasks are performed. He divided staff into five groups, providing financial incentives in the form of a large bonus at the end of each semester to the team that works best together.

“I was aware that I am trying to get people out of their comfort zone and they would fiercely resist me, but as principal I changed the criteria on which their work is judged.,” Ali said. “The new criteria were related to how they work together, help each other, coordinate, collaborate and support each other. If it had not been for IPPAM’s teaching, I would not have been able to teach my staff and employees how to work in a team properly.” As a sales manager at JFE Steel Corporation, the largest steel manufacturer in Japan, Tomoko Takami is in charge of the Asian market after previously handling Central and South America. She credits the diversity of IPPAM with preparing her for dealing with these different cultures.

“By listening to other students, I could understand their background and opinions, and after that I could exchange ideas with them and understand that there are many diverse views,” Takami said. “Since I have lots of business relationships in China and Korea, I’m able to analyze their opinions from different angles and respect their customs.”

She was proud when a local newspaper recently described her as an internationally minded person, a quality that was fostered at IPPAM. She encourages young employees at her company to follow in her footsteps by living and studying abroad to improve their business sense.

“My classes have been very useful in learning how to deal with organizations, which are made of distinctive characteristics,” Takami said. “Now I have more subordinates than before, and I manage our section by taking advantage of the skills which I learned at USC, such as how to motivate, how to promote, and how to work as a team.” As spokesman for the Kuomintang (KMT) political party, which has ruled Taiwan for most of the past 80 years, Kaiser Hung conducts press conferences, writes political commentaries for newspapers and the Internet, and goes on television to advocate on behalf of the party.

“The IPPAM training has helped me think more broadly about political issues,” Hung said. “I don’t only focus on them from the Taiwan side, but consider the international side.”

Hung sought to join KMT following the party’s defeat in the 2016 presidential election. Feeling like the party lost because it was out of touch with his generation’s thinking and methods of communication, he thought he could help establish a connection with younger voters. He is the youngest spokesman in the party’s 97-year history.

“I believe that IPPAM impacted me a lot, advancing my communication skills, big-picture thinking and the integrity of my behavior,” Hung said. “Every time I encounter a new mission, I always take a few minutes to think about the whole picture, not just the details, but the process.” Most IPPAM students come to USC from other countries. But some, like Katherine Hennigan, are U.S. natives who recognize the value of an international orientation in today’s interconnected world.

When she entered the program, Hennigan was working on the business team of then-Los Angeles Mayor Antonio Villaraigosa, with part of her team’s focus to encourage international trade and investment in Los Angeles.

“People often fail to realize how much international public policy affects local government, especially in a global city like Los Angeles,” Hennigan said. “Much of the major real estate development going on in this city is made possible by foreign investments. You simply cannot fully understand the issues facing this city without having a solid grasp on international economic policy.”

Earlier this year, after 12 years working for the City of Los Angeles, Hennigan formed her own public affairs firm called ColLAborate. Hennigan and her business partner represent clients in a wide range of industries, including real estate development, waste management and private security.

While at USC, Hennigan served as president of the IPPAM student senate, and she helped teach her international classmates about American culture, sharing her love for the country and L.A. with them.

“The IPPAM degree changed my life,” Hennigan said. “The curriculum was perfectly tailored to my career. Each class covered content that was directly relevant to actual issues I was dealing with in the public sector, and now in my career as a public affairs consultant. Moreover, the program gave me a tremendous opportunity to expand my horizons, both by getting to know my international classmates, and by giving me the chance to travel extensively throughout China and Taiwan.” After completing his degree, Alejandro Becerra returned to Fedesarrollo, a top Latin American think tank, as a junior researcher tackling one of the most pressing issues facing Colombia. He is leading a consulting project to estimate the future fiscal cost that the Colombian government will incur if it extends coverage of the pension system.

The effect of aging baby boomers is not just an issue in the United States. Projections by the Colombian Census Bureau indicate that the percentage of the population over the age of 65 will grow from 6 to 17 percent by 2050, creating an important social challenge for which Becerra is trying to help the country prepare.

“In Colombia, there is a need to improve the quality of the public policies, which means that there is a high demand for a public policy analyst,” Becerra said. “IPPAM provided me with analytical and managerial skills needed to manage programs. The professors taught me the importance of organization, hard work, perseverance and rigorousness to achieve better public policy analysis and practices in the real world.”

While continuing his work for Fedesarrollo remotely, Becerra recently started pursuing a Ph.D. in Quantitative Finance at the University of Carlos III in Madrid, where he hopes to research topics related to finance and pension systems. As a data analyst for Charitable Ventures of Orange County, Fitsum Fanta assesses the Families and Communities Together program, finding ways to increase program efficiency. Run by the Orange County Social Security Agency, FaCT serves more than 15,000 residents of the county each year in working to strengthen prevention services designated to reduce the risk of child abuse and neglect.

“IPPAM helped me think analytically about different situations,” Fanta said. “That skill set has helped me go into a new profession with the curiosity and drive to analyze all the data.”

A native of Ethiopia, Fanta is passionate about community development and poverty alleviation back home. Although he has stayed to work in Southern California, he contributes to his home country through the Ethiopian Diaspora Fellowship, which he assisted another USC graduate student in founding in 2014.

Each year, the fellowship provides five people living in the U.S. from an Ethiopian background the opportunity to spend six months in Ethiopia providing their knowledge from American universities to organizations there.

“From the inception of the program, I utilized the knowledge I got from IPPAM in nonprofit organization establishment and development process, helping the founders to understand what the sector looks like and the management processes,” Fanta said. “In my current capacity as strategic advisor, I assist with the ongoing program implementation and partnership engagement.”