As an undergraduate student, Gabriele Almon became involved in response efforts to Hurricane Katrina. She was struck by how the most devastated areas had the least amount of government and nonprofit response.

The experience sparked Almon to change her plans from pursuing a career in international business to learning how to advocate for low-income communities when disasters occur — a decision that led her to the USC Price School of Public Policy’s Master of Public Policy program.

A decade after seeing firsthand how badly FEMA mismanaged its Katrina response, Almon is sitting on the FEMA National Advisory Council that was created by a Congressional act in the aftermath. As one of 35 members providing consensus recommendations to the FEMA Administrator, she is in a position to represent the interests of lower-income individuals.

“I don’t hear their voices being fully represented in discussions on policy formation, so I’m working hard to make it my personal mission to bring that voice to the table,” said Almon, who graduated with her MPP from USC Price in 2012. “I focus on advocating for poor, disadvantaged and marginalized communities, because I know that they are the ones most affected when disasters happen around the world.”

Almon (back row, center) with her fellow members of the FEMA National Advisory Committee (Photo courtesy of FEMA)

Almon applied for the position in 2016 with little expectation she would get the appointment. It turned out that Almon was exactly what the FEMA Administrator was looking for — a representative of the rising emergency management professionals, proficient in emerging technologies, who also possess a forward-looking view of what communities are going to be vulnerable in and what the humanitarian community can do to prepare. She now sits in the Emerging Leader seat on the council.

Entering the final year of her three-year appointment, Almon has been relied upon more than she expected. Serving on the Preparedness & Protection and Geographic Information Systems (GIS) subcommittees, she’s taken a leading role in writing technology-based recommendations that have been accepted by the council and forwarded to the administrator.

“It’s a win for me to be such an active participant,” Almon said. “I think a lot of the things I’m pushing and would like to advocate for more with my colleagues on the council are in line with the issues the council wants to put forth.” 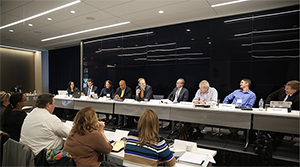 Many of the skills she used in crafting the recommendations were learned at the Price School in courses on complex data, statistical and cost-benefit analyses.

“A huge part of me choosing USC Price was how the MPP program was structured — half quantitative and half qualitative,” Almon said. “We spent hours learning to crunch data each week, evaluating policies elected officials make. But we also practiced writing different kinds of materials that are placed in front of government officials, learning to craft a persuasive argument using science and data. Not every school has that.”

She credits USC Price Professor Gary Painter with pushing her to succeed in the classroom and gaining knowledge that she utilizes in her role today.

“Gabby Almon is like many of our students who are passionate about social change and recognize the need to acquire the tools to implement that change in their work,” said Painter, who also directs the Sol Price Center for Social Innovation. “Gabby’s success is not surprising, but a result of capitalizing on hard work, skills and networks to improve the quality of life for members of all communities.”

As she raises her young daughter with husband Billy, Almon has worked as a consultant in Los Angeles advising government agencies, humanitarian NGOs, Fortune 500 companies and academic institutions on best practices, emerging trends and opportunities for innovation in crisis response.

Eventually, she aspires to take her work of supporting poor and lower-income Americans to the highest level — the White House.

“As we see a whole new set of threats and emergencies and crises happening all over the world, I think it’s important for the next president to have someone in the White House, not just at FEMA or DHS, who understands what’s happening and can identify opportunities crises offer to make our nation safer and more resilient in the future,” Almon said. “As someone incessantly hopeful and really comfortable with data and developing sustainable policies, it would be a dream come to true to serve in that capacity.”