With incidents of violent extremism occurring at an alarming rate, the Safe Communities Institute at the USC Price School of Public Policy hosted the USC Summit on Global Solutions in the Age of Homegrown Violent Extremism (HVE) on Nov. 14. The event brought together counter-terrorism experts, local and international public officials, nonprofit leaders and scholars to engage in a dialogue around developing comprehensive public health strategies for detecting and deterring race-, religion- and issue-oriented motivations of homegrown radicalization and extremism recruitment.

“In light of recent events, this summit could not be convened at a more critical time, unfortunately,” said USC Price Dean Jack H. Knott. “From Berlin to Barcelona, from New York to Nice, from San Bernardino to Charlottesville, each tragedy is a sobering reminder of the realities that we face today, each and every one of us — it can happen anywhere.

“What makes homegrown violent extremism especially challenging is that it is a problem on a global scale, but with very local roots,” Knott added. “This is a very complex problem, and it calls for data, analysis and research that will further our understanding and hopefully lead to more effective solutions to a safer world.” Professor Erroll Southers is interviewed by the media. The summit was covered by several news outlets, including the Los Angeles Daily News and the Orange County Register. (Photo by Tom Queally)

Knott noted that security and public safety has long been a focus of the Price School, which conducts research on community-based extremism prevention initiatives and offers training programs for public safety leaders through its Safe Communities Institute, directed by Professor Erroll Southers.

As chair of the summit, Southers explained that the event was meant to recognize, applaud and build upon the efforts of the White House Summit on Countering Violent Extremism (CVE) held by President Obama in 2015 and similar forums that have come before.

Key takeaways from the summit included: the importance of a holistic approach to stopping radicalization, beginning at the community level; the urgency in forming a strategic plan to combat the advantage extremist groups hold on the social media front; and the need to establish consistent definitions for terrorism in the United States. Los Angeles Mayor Eric Garcetti spoke about the city’s work to address violence at its roots by supporting community-led efforts, helping people of different religions and ethnicities find common threads to pull toward rather than away from each other.

Deputy mayor for homeland security and public safety Jeff Gorell brought attention to the city’s Strategies Against Violent Extremism (SAVE) program, as well as the recently launched Safe Spaces project, which actively works with communities to connect Angelenos to clinical psychologists and support groups that can deter them from choosing violence.

“We know that hate groups exploit isolation, that they exploit hate, that they allow people to feel their problems are about the injustices put upon them by others,” Garcetti said. “We offer something different — a picture of justice, of support, of the pluralism upon which this city and nation was founded.” Civil rights attorney and activist Constance Rice, founding co-director of the Advancement Project, gave a keynote address on how lessons learned from her crusade against street-gang violence in L.A. can be applied to HVE.

Rice asserted that there had been a long war on gangs in L.A., and after 30 years of violence there were six times as many gangs and twice as many gang members. That is when she brought together the LAPD, Sheriff’s Department, scholars from local universities such as USC and UCLA, and 40 community groups to develop the report “A Call to Action: A Case for a Comprehensive Solution to L.A.’s Gang Violence Epidemic” in 2007.

“What we suggested was a wraparound, neighborhood-based, comprehensive public health strategy,” Rice said. “It is multi-sectored, coordinated and sustainable, requiring community experts, law enforcement, foundations, schools, churches — you have to organize that entire ecosystem around the mission of reducing violence. The most important thing we did is change from a framework of a war on gangs to attacking the trauma along with the violence.” The summit featured five distinguished panel discussions. In the first session, moderated by Price Professor David Sloane, three former members of extremist groups shared their experiences of radicalization, as well as what led them to de-radicalize and reenter society.

Angela King and Tony McAleer, co-founders of the nonprofit Life After Hate, said that a feeling of shame and being “less than” in their formative years made them receptive to recruitment into white supremacist organizations, where they found acceptance and a sense of power.

They started Life After Hate to build a “community of formers” to help others, also going through those cognitive shifts, get the acceptance, attention and approval they need to extricate themselves from their extremist group.

King declared the importance of identifying gaps in the lives of young people that leave them open for radicalization.

“When I was bullied, there was nobody there to talk to, and I was such a fragile person then,” King said. “My own humanity was stripped, and that made it OK for me to strip others of their humanity. If there was some process to work on that issue, things probably turn out a whole lot different. If we can learn to identify these gaps, we can educate families, teachers and law enforcement about how to identify them and what to do for these voids.”

Mubin Shaikh, author of the book Undercover Jihadi, went to India and Pakistan at the age of 19 and became a supporter of the global Jihadist culture before the 9/11 attacks made him reconsider his views. He returned to his native Canada and later served as an undercover operator with the Canadian Security Intelligence Service.

“Law enforcement and community organizations need to put aside the terrorist thing for a second and just think on community safety,” Shaikh said. “Putting aside all the politics and everything else, a community-safety approach needs to be taken.” 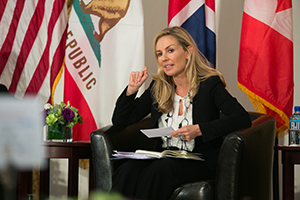 Sasha Havlicek, director of the Institute for Strategic Dialogue (Photo by Tom Queally)

Sasha Havlicek, director of the Institute for Strategic Dialogue in London, gave a lunchtime keynote and moderated a second panel on communication and technology in advancing public solutions for HVE.

“What I believe we’re seeing today is the rise of cumulative mainstreaming extremism, which is to say different variants of this ideology are on the rise and playing a symbiotic reinforcing role with each other,” Havlicek said. “We now see groups mobilizing each other’s fan bases, mirroring narratives and tactics.”

Havlicek named ISIS the standard bearer for the use of technology and social media for recruitment and radicalization, originating from a 55-page document that outlines ISIS’s guide to media jihad. She contended that there needs to be a global strategic framework for using social media to counter radicalization efforts.

“The gaps we’ve allowed to emerge between the communications operations of extremist groups and the efforts of those who would seek to prevent them from spreading their ideology is enormous in terms of content, strategy, technological tools and resources,” Havlicek said.

“If definitions and labels shift with the political wind, that’s a problem,” Brzozowski said. “If labeling and characterizations are weaponized and deployed toward shaping a particular narrative or scoring political points, that’s a problem. If brown folks or Muslim folks within the United States who kill people are terrorists while their white brethren who do the same exact thing pursuant to an ideology are lone wolves or mass shooters or deranged dudes, that’s a problem.

“If countering all forms of domestic extremism is indeed the objective, then understanding the distinction between domestic terrorism, international terrorism and HVE is absolutely imperative,” he added. “Imprecise vocabulary leaches any CVE effort of its effectiveness. At the end of the day, you can’t craft a forward-leaning policy prescription for a problem you can’t even define.”

Varun Soni, USC’s dean of religious life, moderated a fourth panel discussion on ways forward toward a holistic strategy. Joumana Silyan-Saba, director of SAVE in the L.A. Mayor’s Office, urged people to look five to 10 years ahead, accounting for global shifts in consideration to the refugee crisis, and a rise in nationalism.

“Shifting narrow policies into much more localized public-health models that are conducive to promoting community-based organizations and grassroots movements is the way forward,” Silyan-Saba said. “We can no longer think of issues of violence and violent extremism through the prism of military and law enforcement only.” 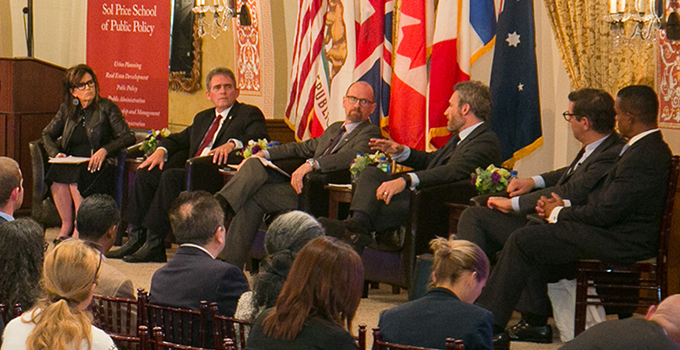 The summit concluded with an evening session on “Keeping Cities Safe: Leadership in the Age of Homegrown Extremism” as part of the USC Price Athenian Society’s Dean Speaker Series. NBC anchor Colleen Williams led an international panel on a discussion of how municipalities around the world are preparing for and mitigating the risks and consequences of HVE.

Howells and Lemoine spoke about the debate over sacrificing civil liberties to keep cities safe.

Howells explained that the UK has limitations on freedom of speech when it is used to propagate hate, and UK authorities have the ability to take hateful material off the internet. Lemoine noted that France, which only two weeks ago lifted the state of emergency that was instituted following the 2015 attack in Paris, also recently established a law that strengthens the power of police to fight radicalization efforts on the internet.

“The debate in France is more to some kind of proportionality to be found and how far do we agree to limit our liberties to make sure that we’re safe,” Lemoine said. “We were considering that being free without liberty doesn’t make any sense either.”

Davis emphasized how we can’t fall into terrorism’s trap of trying to tear apart communities. “It’s important to promote the opposite of what terror is about. We can individually do that. We can promote goodness. The amount of compassion we show one another — it minimizes the impact of terror in trying to divide us.”

After participating in the final session, Southers provided closing remarks: “If we are to enhance social morality, responsibility and community integrity with the intended outcome of facilitating community-based efforts to identify and explore solutions to this challenge, it begins with acknowledging and removing policies cultivating animosity and stoking alienation.”

“The time to change our attitudes and policies toward radicalized individuals is now, and that process begins here.”