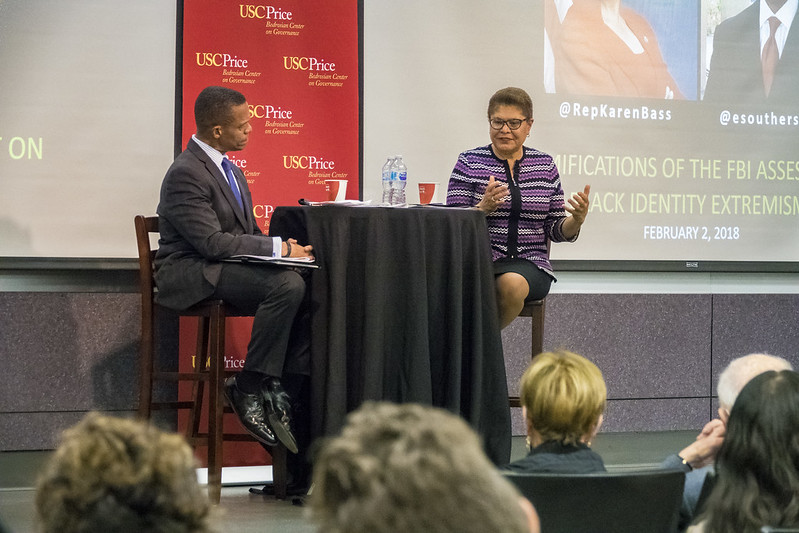 U.S. Congresswoman Karen Bass spoke at a USC School of Public Policy event on Feb. 2 to raise awareness about an FBI document that she is strongly concerned will lead to police violence against young black activists.

Professor Erroll Southers led an open discussion with the Democratic House representative from California in a forum presented by two centers at the Price School — the Safe Communities Institute and the Bedrosian Center on Governance.

“This is a very important discussion about law enforcement, intelligence capabilities and the implications for issues of equity and civil liberties,” said USC Price Dean Jack H. Knott, who remarked on the lifelong focus of Rep. Bass on addressing injustice and inequality.

Southers, a former FBI special agent who serves as director of the Safe Communities Institute, explained that in August the FBI released a 12-page assessment, prepared by its Domestic Intelligence and Analysis Unit, titled “Black Identity Extremists Likely Motivated to Target Law Enforcement Officers.” In October, the report was leaked and made public by foreignpolicy.com.

Examining the causes of extremist violence Professor Erroll Southers holds up a copy of the report for the audience at USC Taper Hall. (Photo by Deirdre Flanagan)

Bass questioned U.S. Attorney General Jeff Sessions about the report during a November hearing of the House Judiciary Committee, and Sessions couldn’t account for the report or name any black identity extremist organizations.

Southers said the Safe Communities Institute analyzed the FBI report and found that the six killings of police officers by black perpetrators had no connection to a black identity extremist organization or ideology. Rather, they were typically associated with the sovereign movement that targets the government and includes people of every race, gender and ethnicity.

According to Anti-Defamation League statistics that Southers presented to the audience, 83 percent of shots-fired incidents against police officers in the U.S. since 2009 involve right-wing extremists, which include white supremacists and anti-government extremists. In addition, data showed that, among all murders committed by domestic extremists from 2007-16, right-wing extremists carried out 74 percent.

“What makes this report so damning is not that it’s talking about an extremist ideology — it’s the target of this alleged ideology,” Southers said. “When you start targeting cops, that galvanizes everybody.” Remembering the level of oppression that she faced as a community activist protesting the LAPD in the early 1990s, Bass feels a personal responsibility to not let things get that bad again.

“I worry about smaller police departments, and if there’s an officer-involved shooting with a group of folks who go out to protest, what deters them from saying, ‘We’ve got black identity extremists and the FBI says these are dangerous people, so let’s go round them up,’” Bass said. “I worry about the signal that it sends, which is why I believe the FBI needs to retract it.”

Bass urged activists to let her office know if they experience FBI harassment, saying she is working with the Legislative Black Caucus to have a briefing in D.C. to shine a light on such incidents.

“I think this is important to keep in the public eye because, if we don’t get them to publicly retract it, denounce it and send out clarification, we can still de-legitimize it,” Bass said. “We can generate enough public awareness and public opposition that law enforcement agencies cannot declare open season on young African Americans and Latinos and other people trying to hold police accountable.”

Hopeful for the future During the Q&A portion of the program, Bass was asked about what kinds of things motivate her to continue taking a stand against injustice.

“I have to,” she said. “That’s my social responsibility.”

Bass added, “To see white Americans protesting racism in marches [in Boston and Charlottesville], that’s an incredible development. There are people who are so offended by what’s going on in our country, that is pushes them to activism … and that’s very inspiring.”