Can California be two different shades of green, leading the nation as a steward of both the environment and the business sector? The USC Price School of Public Policy raised this question at the most recent installment of the Dean’s Policy Breakfast Series for the Athenian Society, the school’s premier philanthropic support group.

“The impetus behind our Policy Breakfast Series was to convene civic and business leaders to share their in-depth expertise on critical topics and highly debated issues facing our communities,” said Jack H. Knott, dean of USC Price. “We aim to inspire constructive dialogue and to foster a community of engaged and informed citizens. And this morning, we hope to explore the tensions and also the possible synergies between environmental regulation and business during this time of significant policy and technological change.”

Moderator Daniel A. Mazmanian, Price professor and research director of the USC Schwarzenegger Institute for State and Global Policy, set the stage for the discussion by sharing the results of a recent survey by the Public Policy Institute of California. According to PPIC’s survey, approximately two-thirds of Californians recognize that climate change is happening, and support the state’s ambitious goal for reducing emissions and greenhouse gasses. However, Californians are more divided in their opinions about how the state’s climate change policy will affect the economy. 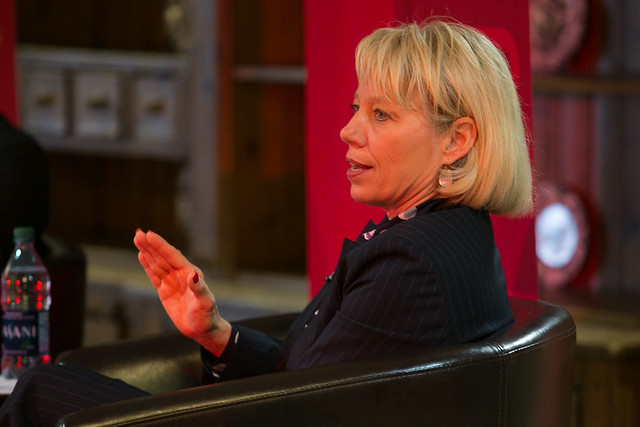 One pertinent policy designed to gradually reduce greenhouse gas emissions (GHG) through market forces is the state’s cap-and-trade program, in which companies buy and sell allowances among themselves to achieve the state’s overall reduction goal for industry. The program currently runs through 2020. Industry officials want the program to be extended to help comply with the state’s GHG reduction goal adopted in 2016 – reducing greenhouse gas emissions to 40 percent below 1990 levels, by the year 2030 – while environmental justice and some community groups want to return to state-level reduction requirements for each industrial facility in the state

“When you’re trying to meet these aggressive goals for the business community, we have to have what we call a market mechanism to do that — an ability to find the most cost-effective ways to meet these goals,” Reheis-Boyd said. “And for businesses who try to survive in this state, this becomes essential. It’s absolutely imperative that we have a post-2020 cap-and-trade program.”

O’Connor agreed, “We see cap and trade as really an opportunity for California not just to reduce our pollution, but to demonstrate to the world that this is a type of policy solution that can work for climate change.”

However, the California Chamber of Commerce and Morning Star Packing Company has filed lawsuits against the California Air Resources Board, charging that cap and trade is a tax, not a fee, and therefore should have required a two-thirds legislative vote to pass.

“Full disclosure: Environmental Defense Fund is a party in this case, and we don’t necessarily see this as a case that’s just about whether cap and trade is a tax or a fee,” said O’Connor. “This is about a pattern of work that is aimed at delaying and deferring action on climate and progressive action in California, like we’ve seen across the United States by folks from the oil industry, by the U.S. Chamber of Commerce and by others.” 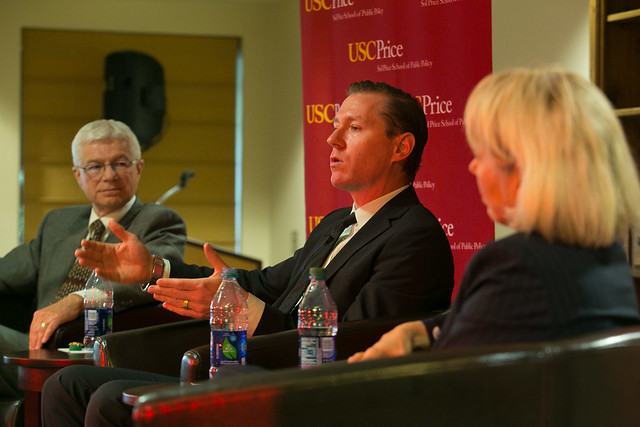 With or without cap and trade, California is committed to the greenhouse gas reductions mandated by SB-32. Mazmanian asked about the policy’s ramifications.

O’Connor underscored one important ramification: businesses must either evolve with the times or cease to exist.

“We’re seeing even the traditional dominant oil industry starting to realize this,” he said. “We’ve seen, for example, a biorefinery in Paramount switch from being a traditional refinery to producing renewable jet fuel that’s currently being used in airplanes. We see other biodiesel; waste grease collections being turned into diesel fuel. We see other sorts of renewable fuels growing up right here in California. And that’s exactly where we think the trajectory is, and we see an increase in the amount of investment by a lot of the traditional energy majors.”

While applauding this innovation, Reheis-Boyd also underscored the continuing thirst for crude oil to make gasoline, diesel and jet fuel.

“The facts of today are that we have to produce almost close to three million gallons of gasoline and diesel every hour of every day, so that 38 million people can drive 26 million cars close to 200 billion miles a year,” she said. 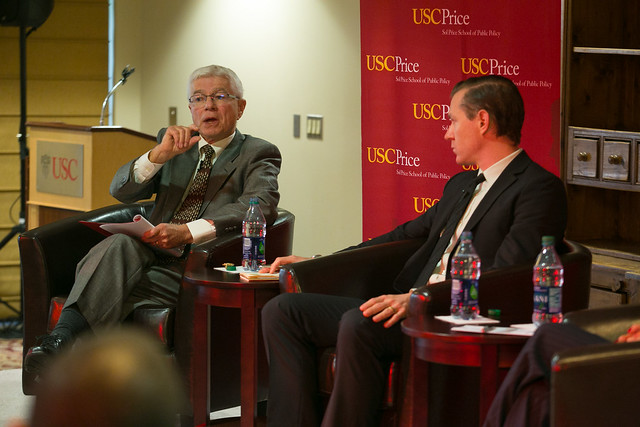 Mazmanian shifted the discussion to another fact of today — the Trump administration may revoke the federal waiver that gives California the power to mitigate its smog by going above and beyond the requirements of the 1970 Clean Air Act.

Both O’Connor and Reheis-Boyd agreed that California would likely respond to a waiver revocation by suing the federal government, and that the litigation would drag on for a very long time.

Mazmanian then raised the contentious issue of off-shore drilling and fracking.

Reheis-Boyd responded by describing the extensive regulations that govern oil and gas production in California, SB-4. “This SB-4 regulation is the most comprehensive that exists in the entire United States about how one can go about finding oil, producing oil, bringing it to market and getting it to refiners,” she said. “And puts in place many, many requirements to make sure that’s done environmentally.”

O’Connor mentioned that despite SB-4, there are several active environmental threats related to oil and gas production. He mentioned the methane leak at Porter Ranch, oil and gas wastewater being injected into underground sources of drinking water, and abandoned wells leaking toxic air contaminants in front of people’s houses.

Looking ahead, Mazmanian acknowledged the complexity of enhancing the economy and quality of life for a growing population, while protecting our health and environment.

“This is a huge challenge that we all face,” he said. “And it’s fair to say, by the way, that Californians want it all, and we have high expectations of ourselves and everyone around us.”