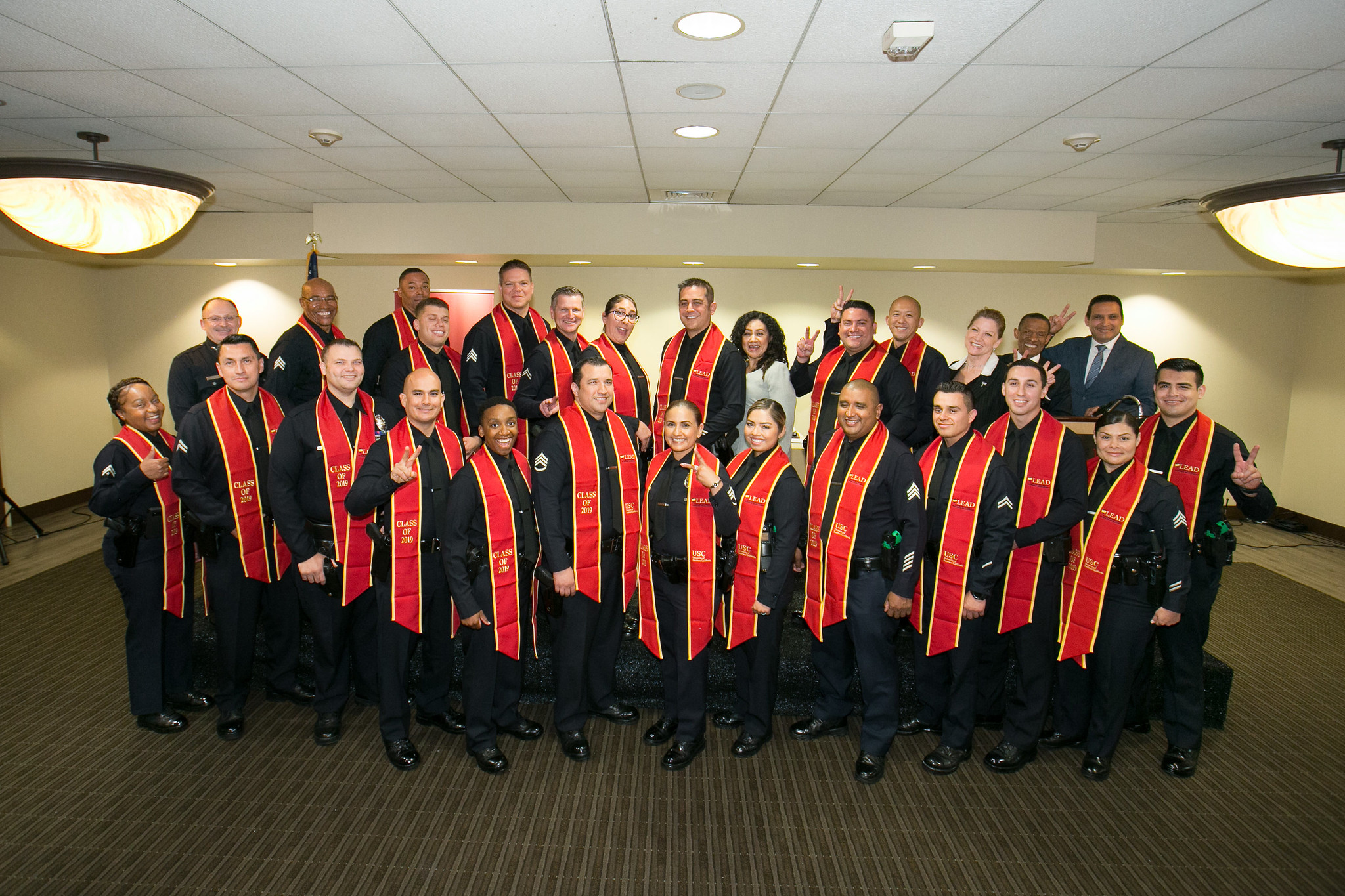 Jonathan Grube noticed a problem in his everyday dealings with community members as an officer for the Los Angeles Police Department. Due to recent changes in national immigration policies, undocumented immigrants and their families were afraid that any interaction with him would result in deportation.

Through his participation in the Law Enforcement Advanced Development (LEAD) program – a partnership between the LAPD, USC Sol Price School of Public Policy and USC Suzanne Dworak-Peck School of Social Work – Grube identified a possible solution that may even be considered for implementation in the department.

Grube determined that the root of the issue is that many Los Angeles residents believe the LAPD works with U.S. Immigrations and Customs Enforcement. As a result, data collected by the LAPD shows a decrease in the percentage of crime reported by Latinos, who comprise the largest portion of the city’s population.

With support from fellow classmates and instructors from USC on his capstone project, which he and the other participants presented to command staff Feb. 27 at the Los Angeles Police Academy, Grube formed a plan of action.

The LAPD had recently published an official document titled “Federal Immigration Enforcement and the LAPD” meant to ease the minds of undocumented immigrants, but the intended audience wasn’t just going to search out the 20-page document online. Grube proposed condensing the document to the size of a small pamphlet so that patrol officers and detectives can distribute the information directly, reassuring people that the LAPD is adamant in its stance to support undocumented immigrants along with all residents of Los Angeles.

Grube won the award for best capstone project on March 1 at USC, when he was among 26 LAPD officers to receive a certificate for completion of the second cohort of LEAD. The program aims to educate officers on community policing, in order to build trust and legitimacy, while enhancing their understanding of vulnerable populations, and reducing the need to use force. 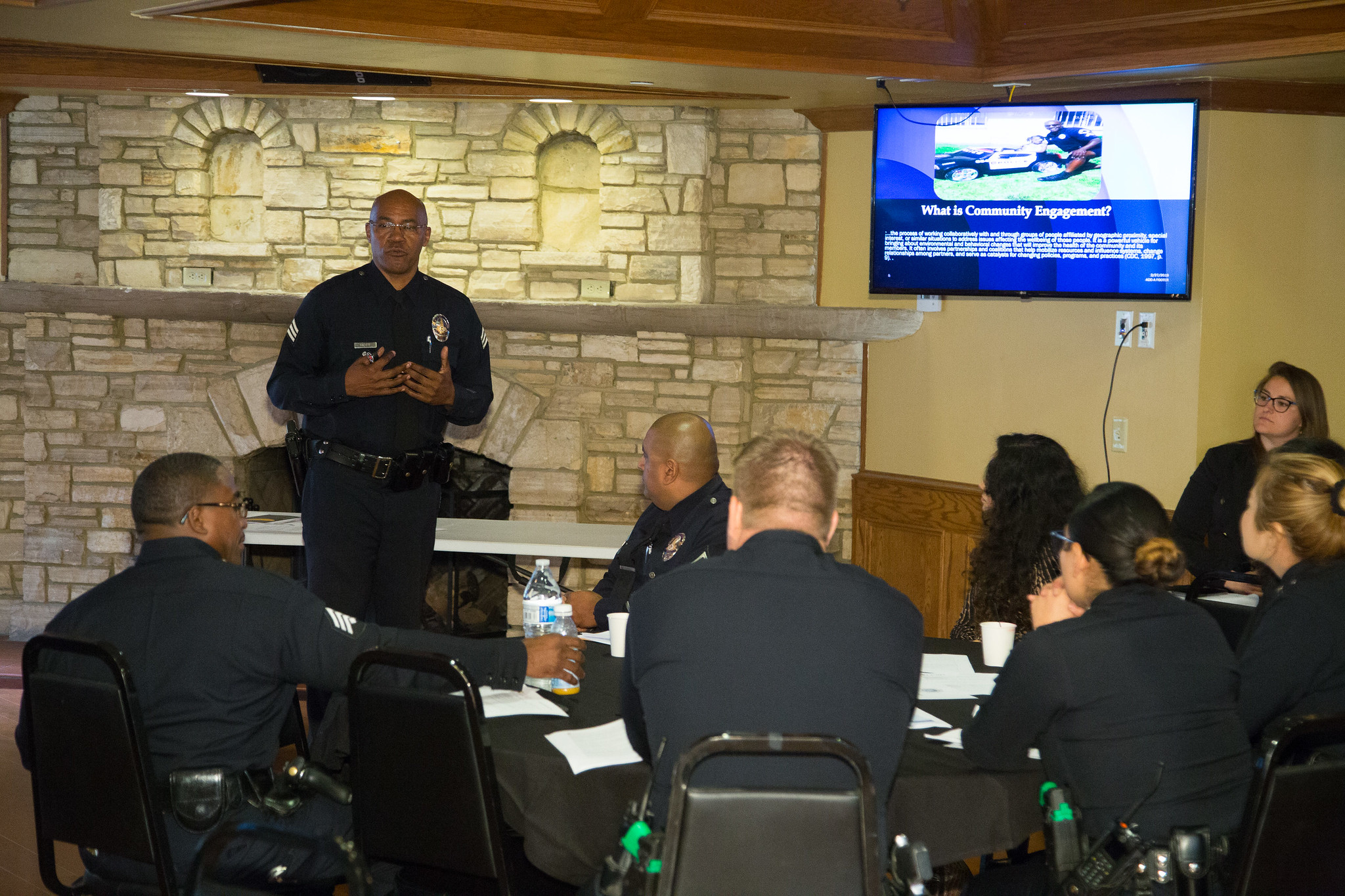 “These were incredible presentations with feasible proposals that the department will be looking at possibly implementing,” said USC Price Prof. Erroll Southers, who leads the program for USC from his role as director of the Safe Communities Institute. “I appreciated the officers leveraging existing LAPD programs and, where possible, engaging in public-private partnerships with either nonprofits or the community.”

“I think one of the things that has been impressive in the collaboration between USC and the LAPD is taking the curriculum and applying it to the real world so that our officers can implement something the very next day,” said Luann Pannell, LAPD director of police training and education. “The officers who are here reflect the best of us and the desire of where we want to go in community and police partnerships.”

Pannell noted that the idea of last year’s best capstone winner, Officer Cecilia Frausto, to send Youth Service Officers out of the Community Relations Office to follow up on domestic violence calls where juveniles were present was turned into a pilot program.

Officers took part in the hybrid online-classroom program on their own time, around busy work schedules. As a response to feedback in the first cohort, USC added more class time, monthly rather than twice a semester, to provide officers with more in-person interaction with each other and their instructors.

“Officers all see something different that could be worked on, but we’re busy with our lives and busy with our jobs – we work long hours – so having this program gave us the opportunity to pump the breaks and create space and time to put effort into these issues that we see and want to address,” said Officer Jennifer Smith, whose capstone was on educating juveniles on potential negative effects of marijuana use. “I’m really excited to see my project come to fruition. It’s just about getting command staff to hear your ideas, and this program gave us the opportunity to do that.”

LEAD provides the tools, resources and skills for officers to address important problems they care about. Lt. Shawn Gregory, the LAPD liaison for LEAD, said it took him 20 years on the force to learn how to access some of the resources that officers are being introduced to in this program.

“Given that many of the students are junior officers, the level of understanding of community resources they showed in their presentations was really impressive,” Gregory said. “And that’s a result of this program putting them in touch with experts outside of the department. We have other leadership programs, but they are usually more about teaching management of personnel and supervision. This is really about teaching officers to be leaders in their community and coordinate efforts with outside organizations and community groups in order to address crime and quality of life issues – and that’s what community policing is.”

In the third cohort, which has already started, the program is moving fully under the care of USC Price and the Safe Communities Institute (SCI). Southers indicated that, beginning with the fourth cohort next spring, LEAD would expand to open enrollment to agencies outside the LAPD, as it does its other certificate programs.

“The plan is to offer our Public Safety Leadership Program in the fall, LEAD in the spring semester, and in the summer our one-week Executive Leadership Program,” Southers said. “So every semester SCI will be hosting a public safety focused certificate program, and offering a different curriculum.”