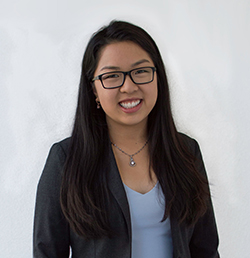 When Vivian Le stands in front of her fellow graduates on May 11 to give her valedictory address at the USC Price School of Public Policy commencement ceremony, she plans to tell them that it’s okay to be uncertain about their path.

Le took many paths at USC before finding the right one. She started in pre-med, planning to follow in the footsteps of her sister in medical school and many family members who work in the health field. But after one semester, Le decided the classes weren’t providing the sort of analytical element that she sought.

So she decided to give pre-law a go, but then she tried an introduction to public policy course at the Price School and felt it opened her eyes to seeing issues from different perspectives.

Le chose a health management track in her public policy major, but she’s already shifting paths again to begin her professional career. She is starting her own consulting business called Au Points and Awards Consulting Services, which aims to demystify the convoluted world of credit and points and make award travel more accessible to diverse populations. Beginning in September, Le will work for Bain and Company, a global management consulting firm.

“The reason I decided to take this job is that I saw a lot of opportunity to encourage more sustainable practices within the business community,” Le said. “I’m hoping to bring a policy perspective into business decisions, and the idea of social entrepreneurship is very exciting to me. In this position, I think I can combine a lot of what I learned at Price and through various internship experiences.”

Le interned for the Los Angeles Unified School District from the end of her freshman year until the beginning of her senior year, gaining firsthand experience with public-private partnerships while working on a project in which Microsoft was contracted to build a student information system. In the summer following her sophomore year, she interned for then-U.S. Congressman Xavier Becerra, currently California’s Attorney General, as part of the Schaeffer Fellows program.

Through a Boren Scholarship, an initiative of the National Security Education Program, she spent her junior year in Vietnam, learning Vietnamese and working with the U.S. Consulate as well as community development nonprofits in Ho Chi Minh City.

“I realized through those experiences that there are so many different things each economic sector is good at, and I felt passionate about drawing on the strengths of each sector to solve complex issues,” Le said.

“In Vivian, I discovered a student with a unique ability to think critically about issues of ethics in public policy,” Resh said. “Vivian does not shy away from the controversial or challenging topics that emerge within our polity. She is a person who acts based on morals, evidence and critical analysis. I couldn’t be more pleased than to have someone of her abilities and moral compass represent the Price School.”