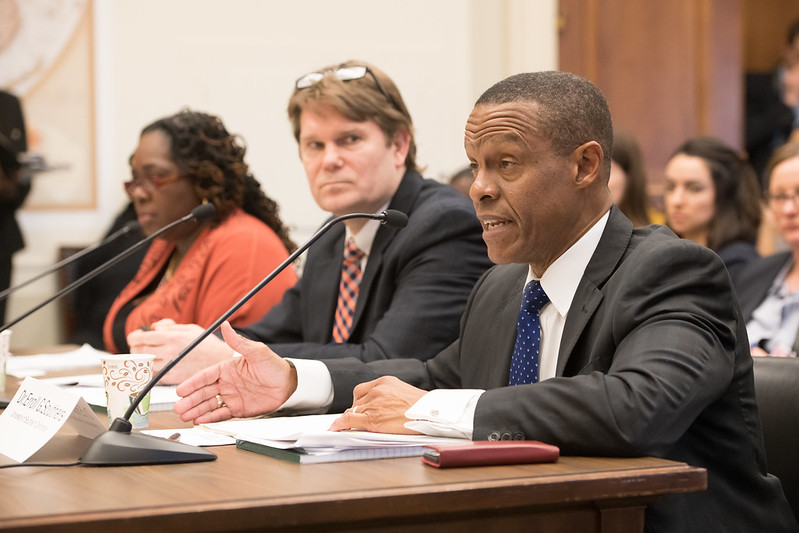 Also testifying were Michael German, a fellow with the Brennan Center for Justice at New York University, and Nana Gyamfi, a human rights and criminal defense attorney. Southers and German previously served as FBI special agents.

“I’m not speaking secondhand when I talk about being in the FBI or being an African-American,” Southers said. “I’ve been inside the Bureau, so I know how good they are, what kind of work they do, and I know this is an effort that comes up short.”

Southers noted that, while there are groups whose ideologies include principles of racially based hatred, black supremacy and/or separatist ideologies, the cases in the FBI assessment do not present evidence of racist ideology. Instead, they present consistent evidence of anti-government sentiments.

He cited data from the Anti-Defamation League indicating that black nationalist attackers accounted for only two percent of the 77 shots-fired incidents against police officers in the U.S. that were carried out by extremist groups between 2009 and 2016.

Southers concluded that none of the cases mentioned in the report adequately demonstrated, or clearly defined, a connection between a Black Identity Extremist ideology and the incident. Moreover, the assessment mistakenly attributed an incident to a single individual when two subjects were involved; and it also mistakenly attributed another instance to an alleged extremist ideological motivation when police determined that “impairment” may have been a factor.

“I wanted to point out the statistics that the data didn’t support what the FBI report indicated, and that the six cases they used as examples were very poorly referenced in terms of the people involved and some of the activities,” Southers said. “We identified omissions and corrections on who was involved, from what organizations and what they did, and we were able to easily find that information in open source. That is very troubling to me.” Congresswoman Karen Bass, a Democratic representative from California who co-chairs the task force, asked for Southers’ testimony at the public briefing. Bass spoke on the issue at an event at USC in February where she called for the FBI to retract the assessment before a local police officer misidentifies an activist as a threat.

She has spoken to Southers about the possibility of joining her at future events around the country to make people aware of this assessment and its possible ramifications.

“The experience Dr. Southers has in this field is absolutely critical to examining the motives of this report,” said Bass, whose district includes parts of Los Angeles. “As the Congressional Black Caucus continues to look into this issue, I will continue to seek his expertise.”