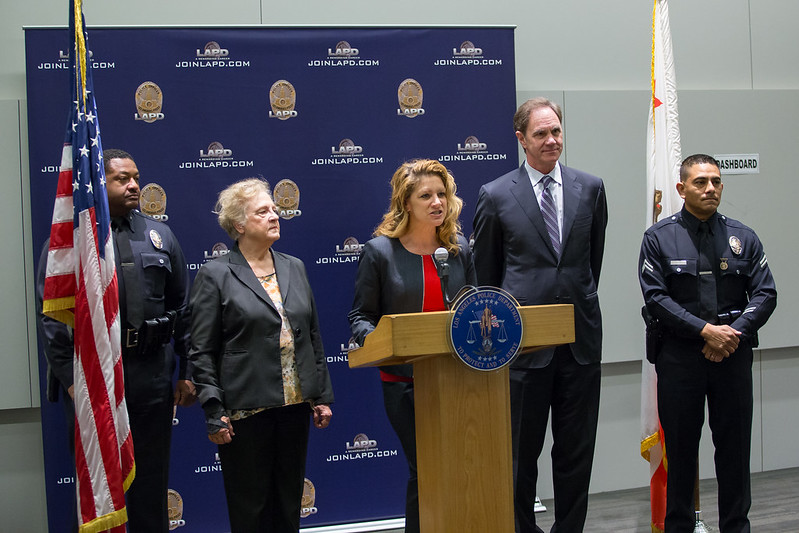 LAPD Director of Police Training and Education Luann Pannell announces the LEAD program, a partnership with the USC Price School and the USC Suzanne Dworak-Peck School, during a press conference in downtown L.A. on Oct. 23. (Photo by David Giannamore) More photos available on Flickr »

The USC Price School of Public Policy and the USC Suzanne Dworak-Peck School of Social Work have partnered with the Los Angeles Police Department to design and deliver a new certificate program that trains officers to better prepared for the complex and complicated issues faced in 21st century policing — including homelessness, mental illness, domestic violence and human trafficking.

The deans of each school joined Dr. Luann Pannell, director of police training and education for the LAPD, to introduce the groundbreaking Law Enforcement Advanced Development (LEAD) program Oct. 23 in a press conference at LAPD headquarters in downtown Los Angeles. Through combining the Price School of Public Policy’s expertise in community policing with the Suzanne Dworak-Peck School of Social Work’s understanding of vulnerable populations, officers receive training on human-relations skills, characteristics of special populations and evidence-based techniques that will reduce the need for force.

“This is a unique opportunity to bring the academic expertise of the university together with the practical knowledge of the police itself,” said USC Price Dean Jack H. Knott. “We take this as one of the most important programs that will define our police department in the 21st century, and we hope that it becomes a model that will be adopted across the country.”

Knott added, “Understanding the community – and the institutions that interact in that community – is essential. Public safety is not just a matter of police. It’s a matter of police interacting with other public safety and also social service agencies, so that when you have an issue such as homelessness, you’ll be able to ensure that those needed services are there.” There are already 40 officers enrolled in the year-long pilot program, which began in June. This first cohort represents every division and rank of the LAPD, as well as diversity in levels and years on the force, with participants’ professional experience ranging from two years to 30 years.

The officers are getting the instruction on their own time, so as not to take away from their sworn duties.

“We want to have the officer bring their practical monthly experience, whatever they’re doing in the field, back to that classroom, to those discussions, and have heartfelt and deep interactions about what’s working and what’s not working,” Pannell said. “We realize that not everything has a quick solution, but through those interactions and cooperation, we certainly are challenging our officers to come up with different solutions to what they are facing every day on the streets.”

The program consists of monthly two-hour online classroom sessions in which instructors offer focused content that identifies meaningful takeaway skills that officers can immediately utilize on the job, as well as three or four all-day, in-person cohort meetings tackling topics such as civil rights, extremism and conflict resolution, and human trafficking.

USC Suzanne Dworak-Peck Dean Marilyn Flynn noted how the LEAD program is among the most innovative and unique efforts nationwide in terms of improving modern policing.

“Among the challenges we’ve identified with police officers are that persons who are homeless, in domestic violence situations or with severe medical illness often don’t respond well to typical interventions by police,” Flynn said. “We’re trying to deepen the understanding that officers bring to a situation so they can deescalate more successfully, so that they can more correctly interpret the actions of people.” 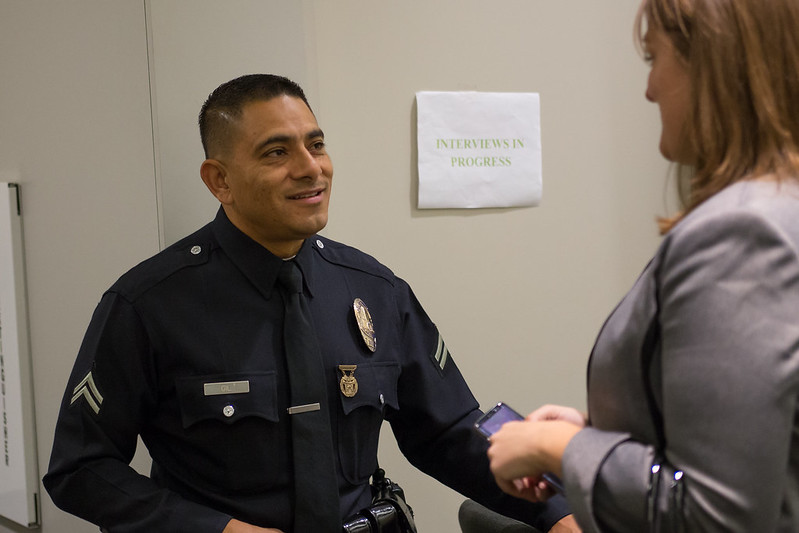 Throughout the course of the year, officers work in groups on capstone projects focusing on an issue which they hope to positively impact in their community — ideally resulting in a project proposal to be shared with department leadership for potential implementation.

“The collaborative efforts among the officers and subject-matter experts have been very helpful because we begin to see different perspectives, not only on the officer side but with the leaders that come in and speak on these subjects,” said Johnny Gil, a 10-year LAPD veteran who is enrolled in LEAD. Price Professor Erroll Southers speaks with a reporter during the press conference. (Photo by David Giannamore)

USC Price Professor Erroll Southers, who helped develop the program over two years of meetings with representatives of the LAPD and social work experts from USC, explained how the LEAD “is really about providing the tools, resources and skills to address a problem.”

“It’s unbelievable the level of interaction these officers have and want,” said Southers, who is the director of the Safe Communities Institute and homegrown violent extremism studies at the Price School. “We find that the two-hour sessions online in the evening seem to go by in a matter of minutes and the one-day cohort seems to be an hour long because of how engaged they are in the classroom.”

Southers indicated that other agency heads have contacted USC about wanting to be involved in LEAD as it grows beyond this pilot program, and he expects it to expand next year to other agencies in Los Angeles and, utilizing the online component, across the country.