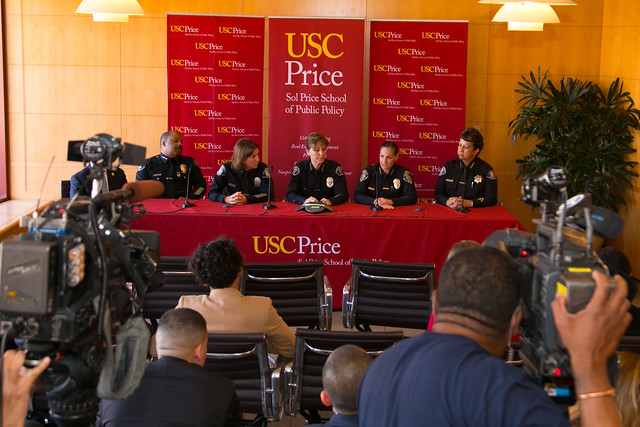 About 300 people attended the event at USC’s Town and Gown ballroom, many of them female police officers or women considering a career in law enforcement. At the end of the conference, each attendee had the rare opportunity to engage one-on-one with the chiefs to find out more about their careers, challenges and successes. John Thomas EML ’16, chief of the USC Department of Public Safety, came up with the idea of bringing the police chiefs together in a public forum and reached out to the USC Price School to partner.

“What our profession needs most at this time is the diversity, the insight and the experiences that women bring to law enforcement,” Thomas said. “Women have enhanced our profession to a degree that we would not be where we are today if not for your contributions.”

In the opening remarks, USC Price Associate Dean Regina Nordahl explained that the conference was planned as an annual event. The Price School has a long history of educating police officers through its Safe Communities Institute, which began in 1946 as the Delinquency Control Institute. 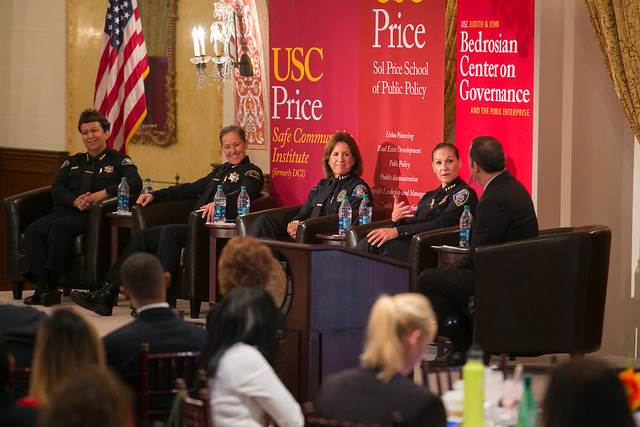 Each had stories of challenges they faced to get to their position. Gomez-Whiteley, who grew up riding dirt bikes, wanted to be a motorcycle officer but was told by the lieutenant in charge that he’s not going to have women riding motorcycles.

“It caught me so off guard that I didn’t know what to do,” she said. “But I also knew I couldn’t stay quiet. I wasn’t one who felt I needed to knock down walls and be a women’s advocate necessarily, I just knew that it didn’t seem right to me. I went in the next day and talked to my sergeant.” Irvine described how in the 1980s, a deputy chief asked about her aspirations. At first she thought he was being progressive, but then he told her that the day they have a female captain in their police department will be the day that pigs fly.

“Fast-forward to 20 years later when I’ve just been promoted to captain, and the next week my daughter and I are at the Orange County swap meet and we see a little toy shop with a flying pig toy,” Irvine said. “I bought it and displayed it in my office. Now I have a collection of flying pigs.”

Gomez-Whiteley advised women in law enforcement to seek both male and female mentors from inside and outside the field. She also emphasized the importance of pursing professional development programs to further your leadership skills. “Invest in your own success,” Gomez-Whiteley said.

Sharing lessons from the field 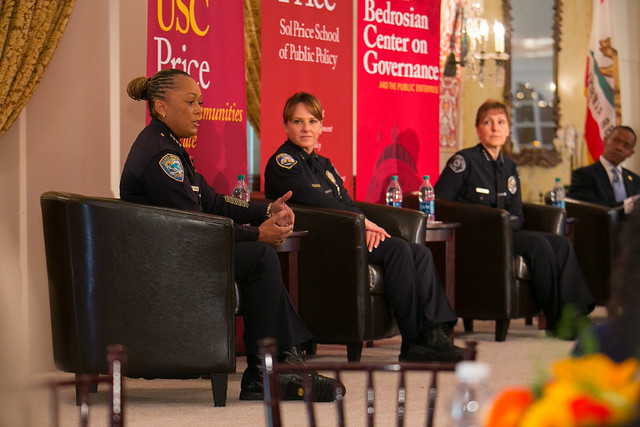 Seabrooks managed the nightmare scenario of a campus shooting in 2013 at Santa Monica College where five people were killed; a tragedy that unfolded the same time as her meeting with a visiting President Obama across town. She stressed the value of putting mechanisms in place to bring back a sense of normalcy to the community after the investigation was complete.

Spagnoli recalled an incident where she previously had to investigate a very popular officer in her precinct. She explained how she chose to do the right thing, and pressed on and broke the scandal, but made sure that her department knew the details before the press. 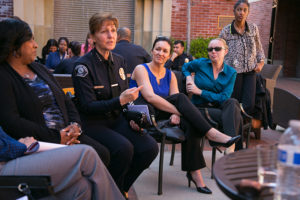 Papa was tasked by Bill Bratton, then chief of the LAPD, to do a top-to-bottom review of SWAT. During the course of the review, she looked into why there were no women on the squad.

“I told them, ‘When I look at all of you and how you train, I’m totally comfortable with what you do and how you do it — but none of you look like me,’” Papa said. “‘You guys need to change that because if you don’t, someone is going to shove someone down your throat who you don’t want working here. You can’t tell me there isn’t one or two women who want to be on SWAT.’”

The SWAT members named two women, and Papa suggested they start mentoring the women to join the team. This led to Jennifer Grasso – who was in attendance at the event – becoming the first woman to make SWAT, the last entity at LAPD that didn’t have a woman. 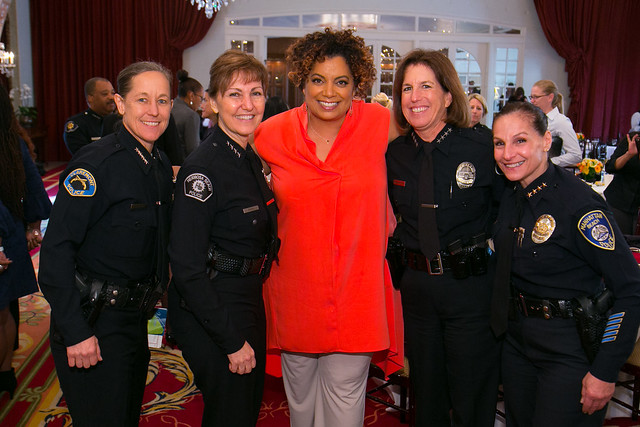 During testimony in one of Fike’s first trials as an agent, a defense attorney slammed his hands on the podium and said, “What do you know about this case? You’re just a little girl!”

“Women really do lead differently,” Fike said. “We can break down barriers, and we do thrive in this high-pressure, male-dominated environment. I learned women are most successful when they’re just themselves. I think we bring a unique set of skills to our work. I think females are inherently better listeners, that we are able to have direct, honest conversations, and I think we have an ability to multitask that quite frankly sometimes we don’t see in our male counterparts.”

She brought up times when negotiations required a softer touch, or there would be a tough guy who wasn’t breaking down under interrogation, and she’d be able to come in as a motherly figure and get a confession. Pereira advised women to be brave and bold, as she was in her career to move from where she was comfortable co-hosting the “KTLA Morning News” for nine years to hosting her own three-hour daily news program on HLN.

At the conclusion of the seminar, four of the chiefs stayed for a press conference – moderated by Professor Erroll Southers, director of homegrown violent extremism studies at the Safe Communities Institute – attended by several media outlets including KNBC, the Los Angeles Times, Associated Press, La Opinion, and KFI News. The chiefs were asked how they encourage more women to get involved in law enforcement.

“I think today is a great example,” Rosales said. “To have USC host this event is a perfect start to getting there.”

[View the story “When Women Lead ” on Storify]