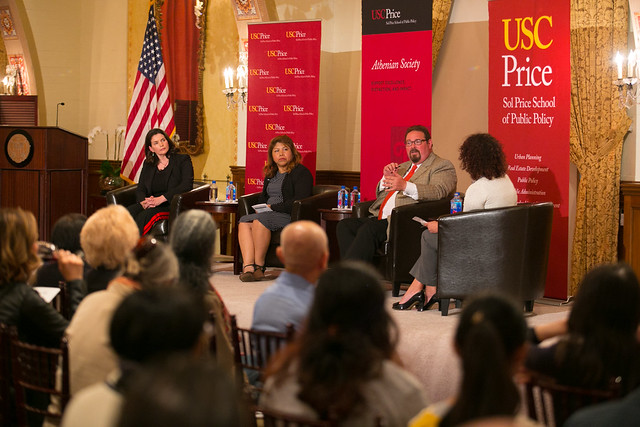 It’s hard to believe that forms of slavery still exist today, though many people might not even realize it. The Athenian Society at the USC Price School of Public Policy put a much-needed spotlight on the issue April 25 in an event titled “Ending Trafficking: A Discussion of Human Rights.” Julia Ormond, founder of the Alliance to Stop Slavery and End Trafficking (Photo by Tom Queally)

USC Price Dean Jack H. Knott set the scene citing a startling UNICEF-USA statistic that an estimated 21 million people around the world are trafficked, a total exceeding the population of the seven largest U.S. cities combined. Human trafficking produces an estimated $31 billion in estimated profits for the perpetrators.

“Unfortunately, even in the 21st Century, we still see slavery being practiced through forced labor and prostitution,” Knott said. “Human trafficking is not an abstract problem. It is a deeply personal one. It affects people and families and communities in every corner of the world, including here in North America. We hope to utilize this series as a platform to elevate the conversation and raise greater awareness around ending human trafficking.”

Actress Julia Ormond, founder and president of the Alliance to Stop Slavery and End Trafficking (ASSET); Luis C. deBaca, director of the U.S. State Department’s Office to Monitor and Combat Trafficking in Persons during the Obama administration; and Florencia Molina, a member of the Coalition to Abolish Slavery and Trafficking (CAST) Survivor Advisory Caucus, joined a panel moderated by Cherrie Short, associate dean of the USC Dworak-Peck School of Social Work.

“This is a widespread contemporary exploitation of men, women and children, and of course we know that is unacceptable,” Short said. “I’m sure everyone in this room would agree that human trafficking is indeed an epidemic that is a blight on our society.”

Addressing challenges on a global scale 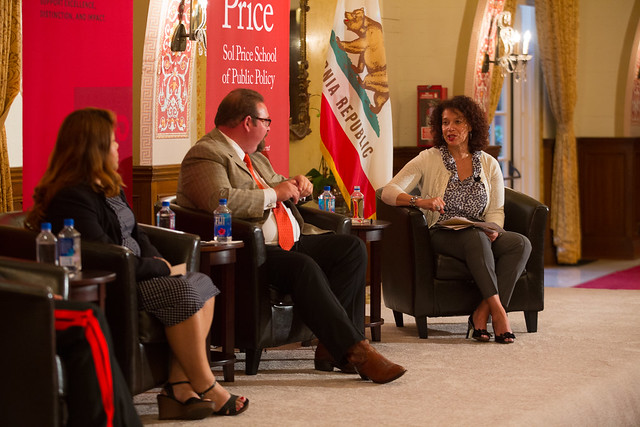 Using her prominence from acting to help with humanitarian causes, Ormond was drawn to this issue because it shocked her system to witness the extent to which this problem occurs. She went on a trip where she met children who were sold into slavery for as little as $300 and forced to catch fish in dangerous conditions.

She started thinking about where this fish was sold and if she ever ate one. It got her wondering about her coffee, clothing and anything else she could have bought to unknowingly support this illicit industry.

“We focus on the legislative solution of transparency because we have a system that has economically enabled this to be hidden,” Ormond said. “As a mother, nothing is more precious to me than my child. I don’t want to be having a life that puts other kids around the world at risk.”

Ormond became a United Nations Goodwill Ambassador for the UN Office on Drugs and Crime in 2005. Two years later, she founded ASSET to amplify the voices of victims and support systematic solutions.

ASSET helped push for the California Transparency in Supply Chains Act of 2010, which requires retailers and manufacturing companies with worldwide annual revenues in excess of $100 million to report on their specific actions to eradicate slavery and human traffic in their supply chains.

Regarding the Trump administration, deBaca indicated concern that aggression toward sanctuary cities could dissuade trafficking victims from coming forward. However, he is encouraged that Ivanka Trump and U.S. Deputy National Security Advisor for Strategy Dina Powell have publicly mentioned how much they care about this issue.

“Let’s work in a multi-sectorial way where we’re bringing in nongovernmental organizations and empowering survivors to be part of the process,” deBaca said. 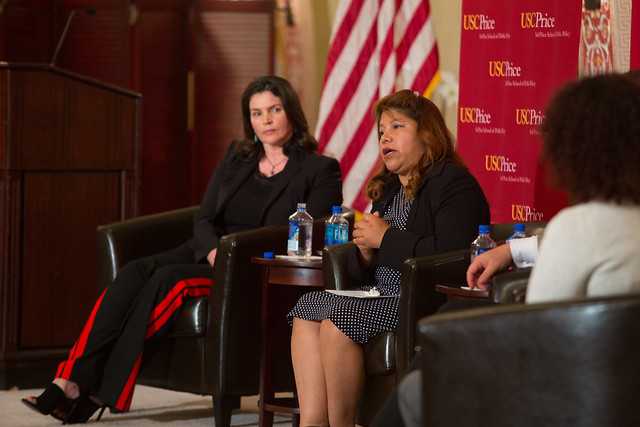 Florencia Molina shares her harrowing story of being a trafficking victim. (Photo by Tom Queally)
More photos available on Flickr »

Molina was the victim of a bait-and-switch tactic used by many traffickers. Living in a small village in Mexico, she heard from her sewing teacher about an opportunity to make money in L.A. With little opportunity for employment in her village, she decided to go for six months and return with money for her three children.

When she got to L.A., the trafficker said she owed $3,000 for being brought over and had to pay it off working 18 hours a day, seven days a week. She was told that, as an illegal immigrant, with no identification, no authorities in the U.S. would care, and that if she did anything to make her traffickers angry, that her children and mother would pay the consequences.

She managed to escape when left unattended to go to church. Molina credits CAST for helping her get back on her feet, and decided to speak out on the issue so that what happened to her wouldn’t happen to anyone else.

Through prosecution, legislation, government involvement, and technology such as facial recognition and digital fingerprint reading, Ormond believes that incremental change can be made to finally correct this injustice.

“We are living in the first time in history where we can stop slavery,” Ormond said. “It is complicated for us to get rid of it, but it is possible.”