In his opening remarks, Knott addressed the shift in environmental policy approach at the federal level. “The administration has substantially altered its stance on climate change by withdrawing from the Paris Accord, which is a major change in policy for the United States and puts us at odds with almost every other country in the world,” he said. “We’ve also rolled back on environmental regulations of fossil fuels, and there’s an effort to diminish the role of the Environmental Protection Agency.” Blanco attributed the climate change issues to poor-to-failing governance at the global and national scale.

“The fact is that the Paris Accord, even if everyone complies with it including the U.S., would still not get us to below a two degree centigrade [increase from pre-industrial levels], so what do we do?” Blanco said. “People are talking about a climate intervention, and it seems like we’re going to have to go that route. So we’re going to experiment with a planet in a way that I think would be the kinds of dreams or nightmares of science fiction writers.”

Mazmanian noted that President Trump has declared that the United States is withdrawing from the Paris Accord pledge made under President Obama, but that the withdrawal will not actually take effect until days after the next presidential election.

“We’re doing everything as if we’re withdrawing, but we have not withdrawn,” Mazmanian said. “That doesn’t make me feel good, but I’m just saying the game is not over. We don’t know what is going to happen yet.” 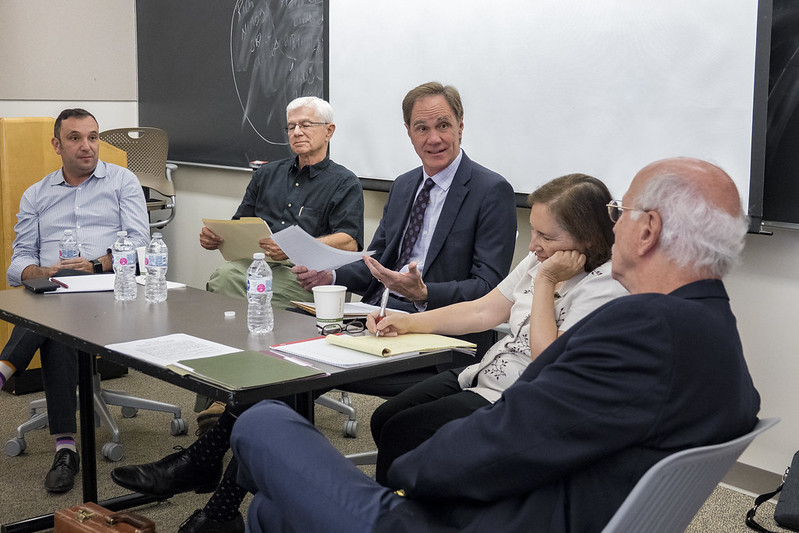 Mazmanian asserted that, because of the president’s actions, the torch has passed to the state lawmakers, mayors and individuals to make a difference in mitigating climate change. “I don’t think all of our actions – unless I’m truly surprised going forward – can collectively counteract what a president with his powers can do to undermine not only the programs, but the integrity of what the United States is doing in this area,” Mazmanian said. “It’s a troubling time if you’re concerned about the quality of our collective response to the climate change challenge.”

Bento agreed that the president is sending signals to renewable sectors not to invest in the United States because there may not be a platform for the security of those investments, but he’s more optimistic about the difference states and cities can make.

“I do see this more as an investment issue in the future of the renewable industry rather than climate change per se, because we’ve seen very positive and bright response to the Trump administration when former [New York] Mayor Bloomberg teamed up with the governor here in California to put together the idea that if the federal government couldn’t do it, we can do it.”

Bento indicated that his biggest concern was the dismantling of the EPA, which he believes could create tremendous disparities protecting natural resources and have lasting health effects.

“Don’t despair or give up,” Rose said. “Thirty-five states have or are considering climate action plans, and we have a number of low-cost or cost-saving tactics and options that can reduce emissions or sequester carbon, and they are a great step forward. So even if we still don’t have that federal legislation everybody is looking for, we’ve made a lot of progress.”