More than 100 women are currently pursuing a degree in real estate at the USC Price School of Public Policy. To help prepare them to enter a traditionally male-dominated field that still lags behind other industries in gender diversity, USC Price hosted its third annual Women in Real Estate Luncheon on Oct. 18 at the Town & Gown ballroom. In his welcome remarks, Richard Green, director of the USC Lusk Center for Real Estate, said that he is encouraged by the number of women studying real estate at USC Price. The education Price students receive will give them greater options to enter and succeed in the real estate industry. “For real estate to succeed as a business, it needs to understand who’s consuming the real estate,” Green said. “The number of white men consuming real estate is a much lower share than it was 50 years ago in this country, so the real estate industry needs to adjust. I think one of the ways that happens is through a formal education process. That’s why I think we here at USC are doing something really important by formalizing the training process through which people get into the real estate business.”

Berrios said she chose real estate development as her concentration at USC Price after seeing USC Trustee Rick Caruso, developer of The Grove and The Americana at Brand, describe his vision.

“I wanted to do something somewhat entrepreneurial and business-oriented that was tangible in a way that I could see how it was going to impact our community,” Berrios said. Balancing the Gender of the Room

“I realized that there have been moments in my career when I put myself in all four of those categories,” Ware said. “Once I realized it, it’s actually quite easy not to. I think once you take yourself out of the natural inclination to put yourself into one of those four categories and start to think about what you want to be instead, you really have a very cool opportunity as a woman in real estate.”

Rooms full of men are becoming rarer in real estate. Gehlhaus and Warner mentioned that their offices are fairly evenly split and that there are women in senior roles in certain departments. Warner noted that she was the first woman hired in the investments group at her company. Gehlhaus indicated that the only thing holding back her division from hiring more women is a lack of applicants — a job opening tends to have 95 male and five female applicants.

“The most pleasant surprise is that it’s not that intimidating to be a woman in this industry, and it hasn’t been as difficult as it appears to be,” Warner said.

As a new mother, Warner said the decision about the right stage in her career at which to have children presented her with two paths: having kids younger and putting her career on hold until they reached school age, or waiting until she reached her career goal. None of this advice suited her, she said. “I’m right at the cusp of my career, moving to that next level with a one-year-old at home,” Warner said. “One of the best things that has happened for me was leaving for four months [on maternity leave], because that gave Regency Centers the opportunity to see my value.”

Panelists expressed disappointment that women in senior positions often haven’t given the mentorship they hoped for, seeming to take the attitude that the next generation must claw its way to the top the same way their generation did.

“Sometimes women can be the more competitive counterpart,” Lucero said. “I don’t want to be that for the next person. I want to make sure I can help whomever is coming after me or coming with me.”

USC Price’s Women in Real Estate Luncheon hopes to do just that — create a supportive community of up-and-coming and established women in real estate careers.

“It was great to hear what they had to say about being a woman in real estate, whether on their relation to men on the job or just being a new mother and how to navigate that,” said Alethia Halamandaris, a senior majoring in real estate development at USC Price. “I also love the networking aspect of it. An event like this for women to support each other and be resources to guide other women is great. I feel so fortunate to be a part of this, because where else can you meet 100 other women in the same industry?”

Changing the Face of the Industry

Melissa Schem, who completed her BRED in May, attended all three of the annual Women in Real Estate events. She began her career in July as an analyst for real estate development firm Hines.

“As a woman, it gave me the confidence to apply to real estate jobs and say I don’t care that maybe I’ll walk into a conference room and be the only female there,” Schem said. “It doesn’t really affect me any more, because you hear all of these super powerful women come and talk, and to know they’ve been there makes you feel a little better.”

Sonia Savoulian, associate director for programs in real estate at USC Price, concluded the afternoon by stating the luncheon is one of the most exciting events each year, and that she thinks the work done at USC Price — especially with the recent addition of the Bachelor of Science in Real Estate Development degree — helps advance the profession.

“I’m very proud of the work we’ve been doing in all the degree programs that we offer in real estate,” Savoulian said. “I think the fact that we’ve created a degree program that has attracted so many women is going to fundamentally change the way the industry looks in a very short amount of time.” 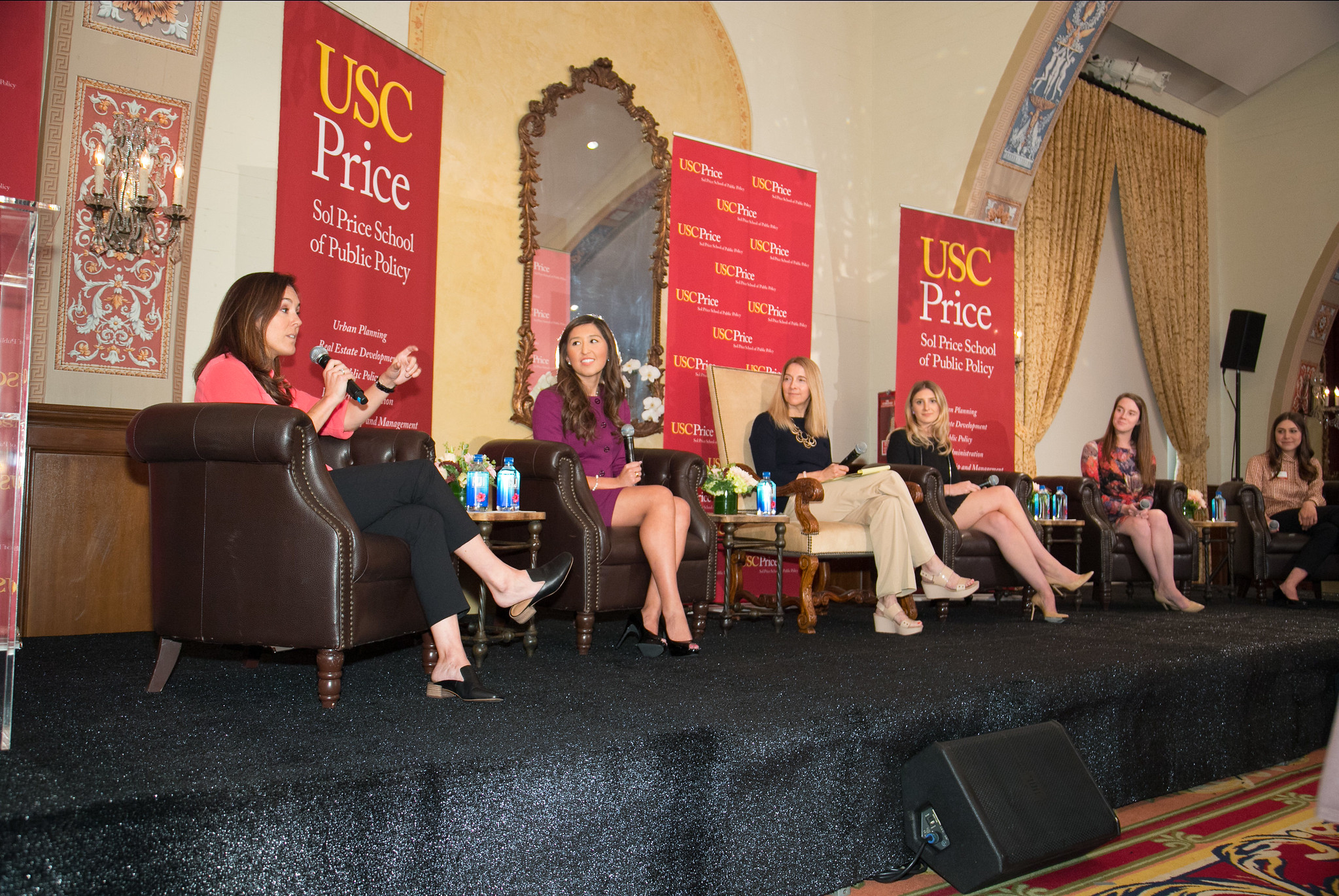