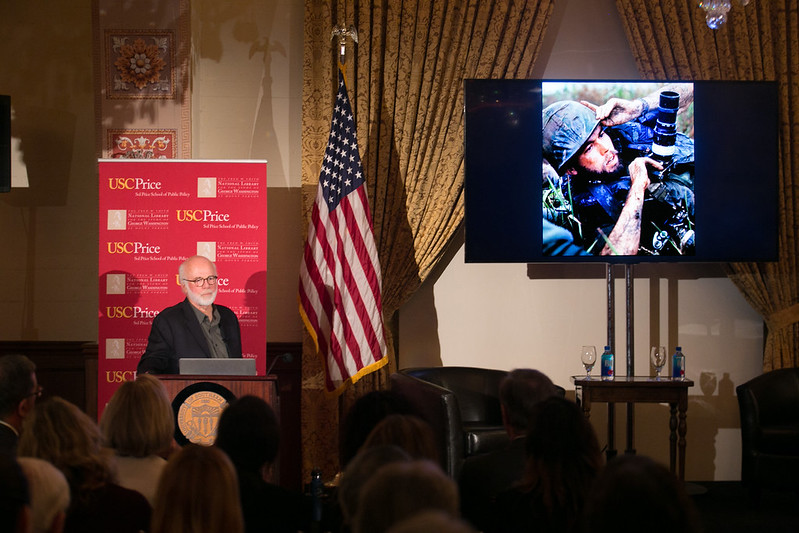 From the White House to the Vietnam War, Pulitzer Prize-winning photographer David Hume Kennerly shared images of history and leadership he has captured over his decades-long career. (Photo by Tom Queally) More photos available on Flickr »

David Hume Kennerly has photographed nine U.S. presidents, providing the public a rare glimpse into the lives and character of the nation’s leaders. In the 2018 George Washington Leadership Lecture, presented Jan. 24 by the USC Price School of Public Policy and the Fred W. Smith National Library for the Study of George Washington at Mount Vernon, Kennerly explored those moments in history and discussed the presidency through the lens of imagery. 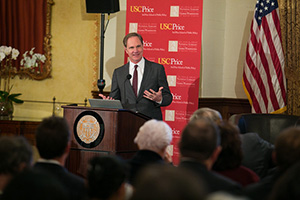 “In today’s digital age, with the ubiquity of social media, we recognize the power that images can have,” said USC Price Dean Jack H. Knott. “A single picture can go viral in almost an instant. It can fuel conversations across oceans and perhaps even influence international media coverage.”

However, Knott noted that this phenomenon wasn’t a new one. Compelling photos have long been a way of telling a story without words.

“They can transport you into another place and into that single moment when that picture was taken,” Knott said. “Photos have the profound ability to move people’s emotions and even to shape public perceptions of what is happening in the world. And sometimes, those images are so enduring that they become part of history themselves.”

Window into the White House Kennerly, who won the 1972 Pulitzer Prize in Journalism for a portfolio of his photos from the Vietnam War, the Ali-Frazier fight, refugees from East Pakistan in India, and combat in Cambodia, at age 27 became the nation’s third chief White House photographer during Gerald R. Ford’s presidency.

He told President Ford that he wouldn’t take the job unless he reported directly to him, and had access to everything going on in the White House all the time. During his talk, Kennerly showed a photo taken during the meeting at which Ford decided to end American involvement in Vietnam — calling it his most important photo from the presidency.

“As White House photographer, I opened the doors for over 70 outside photographers to come in,” Kennerly said. “I wanted other people to see [Ford] for who he was. It wasn’t a PR thing. I ran that operation the way I would have liked to be treated during the [Richard] Nixon time, when there was no access. A photographer’s got one thing in mind, they want to make good pictures. They’re not out to make you good or bad.” 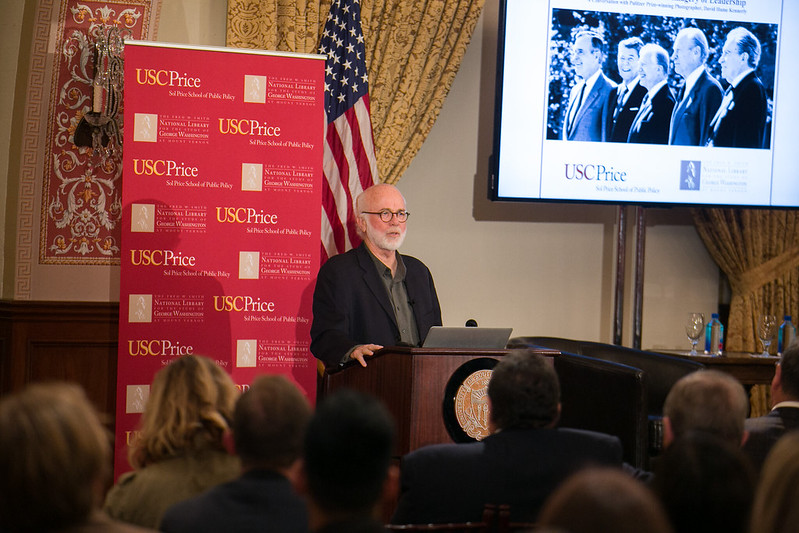 Other important presidential photographs by Kennerly include the first meeting between President Ronald Reagan and Soviet President Mikhail Gorbachev at the Geneva Summit in 1985, where his pictures show Gorbachev charmed by Reagan.

Kennerly went on to show the audience more presidential photos taken over the years – and share the stories behind those candid shots – from Nixon to Trump.

During his presentation of Vietnam War-era photos, Kennerly explained how “my job was to show what [the soldiers] were going through.”

Later in the evening, Professor David Sloane moderated a one-on-one discussion, and asked Kennerly what compelled him to go and take photos in Vietnam.

Kennerly answered, “It was really about covering the biggest story of my generation… and I needed to be there.” 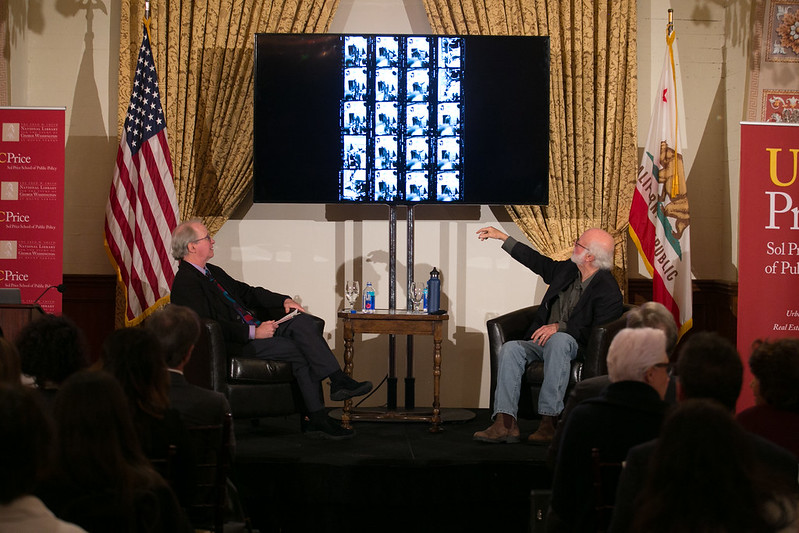 Kennerly discusses photos from the day of Nixon’s White House departure, during his conversation with Professor David Sloane. (Photo by Tom Queally)

In addition, Kennerly went through a history of presidential images. The earliest president to have an existing photograph was John Quincy Adams with the photo taken in 1843, after he left office.

Kennerly called Abraham Lincoln the first American politician to really understand the power of image, asserting that most Americans got to know Lincoln through a campaign photo that showed a decisive, approachable person. George Washington’s image is famous from the $1 bill, though renderings of him are purposeful depictions from artists. Kennerly said he would have liked to capture an image of how Washington conducted business with people.

“I think my strong suit is photographing people doing what they’re doing, not just a portrait sitting in front of a camera,” Kennerly said. “I think where I get the best picture would be like a day in the life of George Washington – not throwing the dollar across the Potomac or riding his horse – whatever he was doing to get a sense of the person.”