In his quest to become a better officer for the Chula Vista Police Department, Evan Linney attended two programs that had the most impact on him.

One was the Master of Public Administration program at the USC Price School of Public Policy and the other Game Changer, a San Diego-based program that brings members of law enforcement together with community members to find common ground over the backdrop of a sporting event.

He saw an opportunity for a collaboration that would benefit both institutions, as well as the City of Los Angeles. Linney, who is completing his MPA in May, introduced Game Changer’s founder, Sean Sheppard, to one of his professors at USC Price, Safe Communities Institute Director Erroll Southers.

The introduction led to a Game Changer focus group held April 18 at USC Price with a moderated discussion meant to facilitate a better understanding of the challenges and misconceptions law enforcement officers and community members face in dealing with each other. Participants then attended a USC baseball game together. (See the full set of photos here.)

“Historically, the LAPD and the City of L.A. have had a lot of issues with police-community relations, so I thought this model would have a huge impact here and what better venue to bring this model than USC, located in South Los Angeles, pretty much the birthplace of poor police-community relations,” Linney said. “We can talk about these things all day long, but without somebody who can legitimately influence policy, it’s all just talk. The reason I wanted to forge this partnership is because I know the Price School has the ability to influence policy and that’s the only way any changes are going to get made.”

The event is the beginning of a lasting partnership for the Price School and Safe Communities Institute with Game Changers.

“It’s great that we’re able to partner on this program, and it’s important for us,” said USC Price Dean Jack H. Knott. “Our goal is to grow the program over time. We want to see it expand and be an integral and very important part of LA. It’s really through open, honest, transparent dialogue with each other that we’re going to be able to come up with the effective solutions to address these issues.”

Southers asserted that the Safe Communities Institute wants to be the research and development arm of Game Changers, taking pre- and post-focus group surveys of all participants to determine the effectiveness of the program in changing perspectives and determining if those metrics can be replicated.

“At the Safe Communities Institute, the three things that we are engaged in are education, research and community outreach, so we really feel great about this opportunity to have Game Changers,” Southers said. “We’re being able to walk the walk when it comes to community engagement, not just talk about it.”

Southers contended that is a rare opportunity as a research institution to put police in a room with members of the community.

“This is the conversation that, when something bad happens in America, we all talk about having and we never do,” Southers said. “So I want to thank Sean for putting this together, having the insight and tenacity to make sure this happens across the country.”

Sheppard noted that Game Changer has reached a critical point in the programs history to be coming to Los Angeles, and credited the Price School for making that happen.

John Thomas, Chief of the USC Department of Public Safety, reiterated the need for this type of dialogue between police and community members in Los Angeles.

“If there’s ever a place where this could actually gain traction and a place where it is very, very grossly needed, it is the City of Los Angeles,” Thomas said. “Having served on the LAPD for a good chunk of my 35 years policing and having grown up in South L.A., I see the benefit of having these kinds of constructive dialogues where individuals feel comfortable in knowing the perspectives from both sides.”

Building trust between police and the community

Moderator Aaron Bruce, vice president and chief diversity officer at the ArtCenter College of Design in Pasadena, set the stage for the focus group by presenting recommendations from the U.S. Justice Department for police to build relationships with the community:

“The Game Changer experience is putting many of these recommendations into action,” Bruce said.

Linney, a participant with experience in other Game Changer focus groups – this was the 61st Game Changer event held since December of 2016 – admitted that one of the biggest takeaways he’s had is that police do a horrible job of communicating with the public.

“I try my best unless something crazy is happening to take a few extra minutes at the end of a call or contact to explain why we stopped them,” Linney said. “Something as simple as taking two to three extra minutes to give them an explanation, we don’t have to do that but we should because that’s part of bridging the gap and making sure that we all leave the scene with a mutual understanding of what happened.”

Members of the community agreed that not understanding why police stopped them was a big reason for their distrust of law enforcement. They felt like they were being hassled because of the color of their skin or what they were wearing.

Felicia Flynn, an officer in the LAPD, explained that officers often get a call with a vague description of someone to look out with in the area, such as a 5-foot-9 black man with baggy pants. If she sees someone walking down the street who might fit that vague description, she’ll pull over just to have a conversation to assess that person.

However, Israel Manzo, a high school student from East Los Angeles, expressed that he gets stopped by law enforcement for these conversations about once a week and is fed up with feeling like he is being targeted.

“Just because of the way they see me, the way I’m dressed, they’ll pull me over and try to have a conversation,” Manzo said. “For me, I feel like you guys are punking us. … It makes me not want to talk to them. Like when they try to make conversation, I would just walk. Sorry, I wasn’t raised to be disrespectful, but I just keep walking.”

Flynn stressed that she would not stop someone just to harass them. Sometimes she has to make contact with community members to follow up on radio calls or else she would be neglecting her duty. While explaining that there often are legitimate reasons for these stops, she also admitted that not all police stops are for legitimate reasons, which is why she became an officer.

“I get what you’re saying with you wouldn’t even want to have a conversation with an officer who pulled alongside you because I actually went through it before I was a police officer,” Flynn said. “My brother goes through it all the time. I grew up in Southeast Compton and Carson. That’s one of the reasons I came on the job, because there’s not a lot of officers who look like me so I want to be an influence on a younger female that looks exactly like me.”

Both sides are sensitive about feelings of racism

Calvin Thompson, an actor based in Los Angeles, described two incidents in which he felt he experienced racism from police. In Florida while walking home from rehearsal, he was stopped by police who thought he fit the description of someone on the run.

Then in New York, he was stopped at a subway station for a misunderstanding and told he had a warrant out for his arrest. He was put in jail overnight, then in the morning got an apology.

Linney didn’t deny that there are cops out there who are racist and have bad intentions, but contended that 95 percent of the time officers have good intentions. For him, it’s frustrating to regularly be accused of racism when he’s just trying to do his job.

“As a white police officer, if I stop somebody who’s Hispanic or black, almost every time people start saying you’re racist,” Linney said. “We have feelings too. It sucks. I have a job to do, and it’s a very difficult thing to have people yelling at you, spitting at you, calling you every name in the book, accusing you of being a racist when you know you’re not.”

Mark Wittcoff, managing director of investor relations at Standard Management Company, conveyed that he feels police blow him off when he tries to talk to them about issues in the business world.

“The biggest crimes in this country are committed by people who look and dress just like me,” said Wittcoff, who was wearing a business suit. “It feels like you don’t have time to talk to me, and some of the crimes that get committed in my environment can be pretty serious.”

Flynn responded that it might seem like officers are cutting him off, but if a coded call comes out indicating there is a business being robbed or someone in danger, they have to go to the more urgent issue. 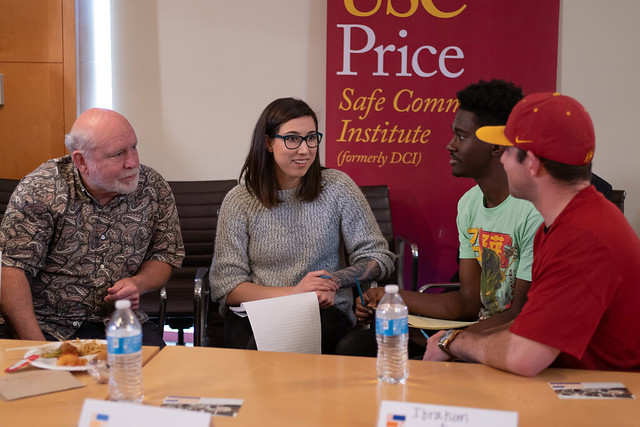 Ibrahim Diallow, a freshman at the Price School who participated in the focus group, came away with a better understanding of what police officers deal with on a daily basis.

“This reinforced that police officers have a lot on their plate and that we can’t expect them to kind of do everything,” Diallow said. “Along with keeping the law, they’re asked to do a lot of social things and get involved in a lot of areas – and they’re people too. We have to have more dialogue with them and … as a community, we have to discuss how we conduct ourselves with law enforcement and make sure that we don’t jump to conclusions and microaggressions.”

Sheppard launched Game Changer in 2016 as a response to the rash of shootings of unarmed black men by white police officers and the resulting protests across the country. Backed with analysis from the Price School and Safe Communities Institute, he hopes to expand Game Changer nationwide.

“I want to thank the Price School, Erroll and [SCI project specialist] Jessie [Allen-Redd] for making this all possible,” Sheppard said. “What we do with this info that we’ve collected from you, it all goes into painting a picture of what we need to do to be a safer community, a more healthy community.”