The USC Center for Interdisciplinary Decisions and Ethics (DECIDE) on Oct. 28 held its inaugural event, the Next Generation Ethics Symposium, which explored the future of ethics in business, media, healthcare, industry, privacy and engineering — and the public policy that links them all.

There has been no shortage of ethical scandals in the news this year, for example the corruption cases with FIFA and Wells Fargo. But there are many ethical dilemmas that don’t make the news, such as a pharmaceutical company delaying production of a new drug that may save lives because a less-effective drug is still profitable.

Decision-making and ethics are the focus of the DECIDE center, which is housed within the USC Price School of Public Policy and the Viterbi School of Engineering. Professor Ali Abbas, director of the center who holds a joint faculty appointment at Price and Viterbi, calls attention to the intersection of three circles in decision-making — ethical, legal and prudential.

“Something could be ethical and legal, but not prudential,” Abbas said. “People think if something is legal, it is ethical, but just because something is legal doesn’t mean it is morally right to do. It’s time for people to have more awareness about the ethical implications of their actions, even if legal.” The event brought together representatives from the USC Annenberg School for Communication and Journalism, Marshall School of Business, Keck School of Medicine, USC Price and Viterbi along with industry practitioners for an interdisciplinary look at the nature of ethical dilemmas.

“In this symposium, we wanted to create an awareness on campus about the new center and bring in people from different fields to show that, even though they were all talking about ethical violations within their particular domains, the common threads were all the same — violations arising from decisions of an individual and an organizational culture that allows these sorts of ethical violations,” Abbas said. “It opened up a lot of collaborative opportunities once we recognized that the main dilemmas are the same.” 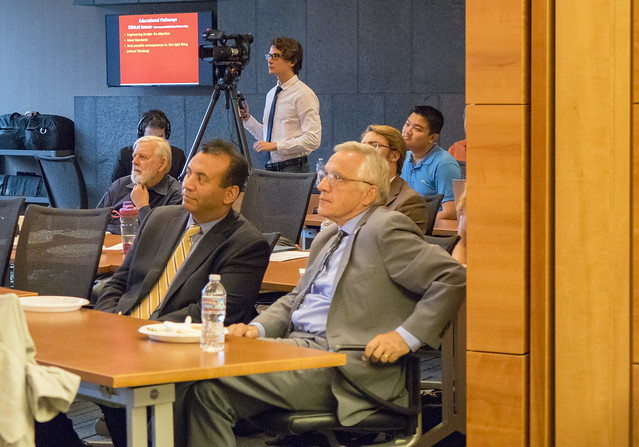 Abbas noted that, as a direct result of the symposium, DECIDE will work with the Neely Center for Ethical Leadership at USC Marshall to start a campus-wide symposium in the spring and with the Keck School on modeling ethical decisions in healthcare. In March, DECIDE plans to launch a professional education certificate on decision-making and ethics for corporate executives.

One interesting ethical dilemma brought up during the symposium was the use of driverless cars. More than 30,000 people die from automobile accidents in the U.S. each year, bringing into question how long the wait should be to implement the technology. Then there’s the collision avoidance of automated cars and what priorities they will be set to enforce.

“In areas such as drones, private security, new technology and healthcare, it’s clear that public policy will play a huge role in determining the types of legislation the public wants to deal with these issues,” Abbas said. “Public policy will be essential in understanding the governance issues that are going to result from unanticipated consequences of technology.”