America Divided highlights the interconnected nature of the nation’s challenges around inequality in education, immigration, housing, healthcare, labor, criminal justice and the political system. The show, which debuted on EPIX just before the fall election, included celebrities such as Lear, Common, Rosario Dawson, America Ferrera, Zach Galifianakis, Amy Poehler, Peter Sarsgaard and Jesse Williams, who explored aspects of inequality – related to their own biographies – through a series of interviews with community members across the country.

Knott pointed out that USC Price faculty members research many of the problems presented in America Divided, including housing and urban development, the economic effect of immigrants, health disparities and the roles that gerrymandering and campaign financing play in creating the political divide.

“I spend a lot of time looking at data and overall analyses of these issues,” Knott said. “What the series did was make it very tangible. These were real people with real stories. And it didn’t just focus on one issue as tends to happen in the news media but brought it together across many dimensions, which I found extremely powerful.” 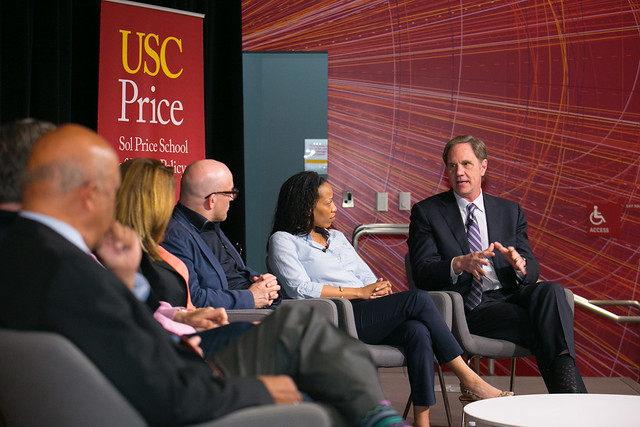 According to Granatstein, the show doesn’t offer any quick fixes, but rather, attempts to promote engagement from the viewer.

“I think through every story was a strand of putting the spotlight on whatever organization, movement or leaders are taking an active role of opposing whatever injustice, inequity or inequality we were focusing on,” Granatstein said. “Speaking for the whole series, all eight stories, really the solution is to get involved and act.”

Lear, the 94-year-old legend who pioneered socially conscious television with shows such as “All in the Family,” “Sanford and Son,” and “The Jeffersons,” saw the gentrification of Brooklyn in his segment.

“I had no guess that I would be so profoundly disturbed and informed,” Lear said. “You think you know what’s going on because you’re reading, you’re hearing and you’re watching the tube, but it isn’t until you get inside it that you really understand.” 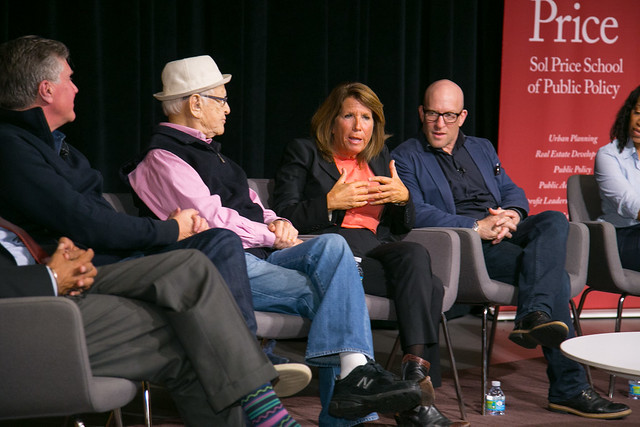 At one point in the conversation, Reiss asked the panel, “How do we bridge this divide?”

Granatstein followed by saying that “empathy” is a way to bridge the divide. He explained how storytelling is an empathy machine, and by putting side by side stories of African-Americans’ experience, the undocumented immigrant experience, and white people out of work in middle America, they hoped to get people who identify with one segment to empathize with others.

Greenberg noted that, in an attempt to create dialogue, the producers have taken the series out for screenings to constituencies across the country, such as recent panel at USC, but also to Washington, D.C., to play for Congress. He said the series has had more than 6 million viewers on EPIX, and upwards of 10 million on all platforms.

“To look at this film and enjoy it and learn something isn’t enough,” Lear said. “We want you to look at it and have to talk to somebody because you’ve seen something you must talk about and get the conversation going. I think one of our great problems is we don’t have people stirring the pot to have the call for conversations and the bellowing this situation requires.”