For 56 years, Rodgers has served as executive assistant to the Dean at the USC Price School of Public Policy – to eight deans, to be exact. She is retiring on July 31st. 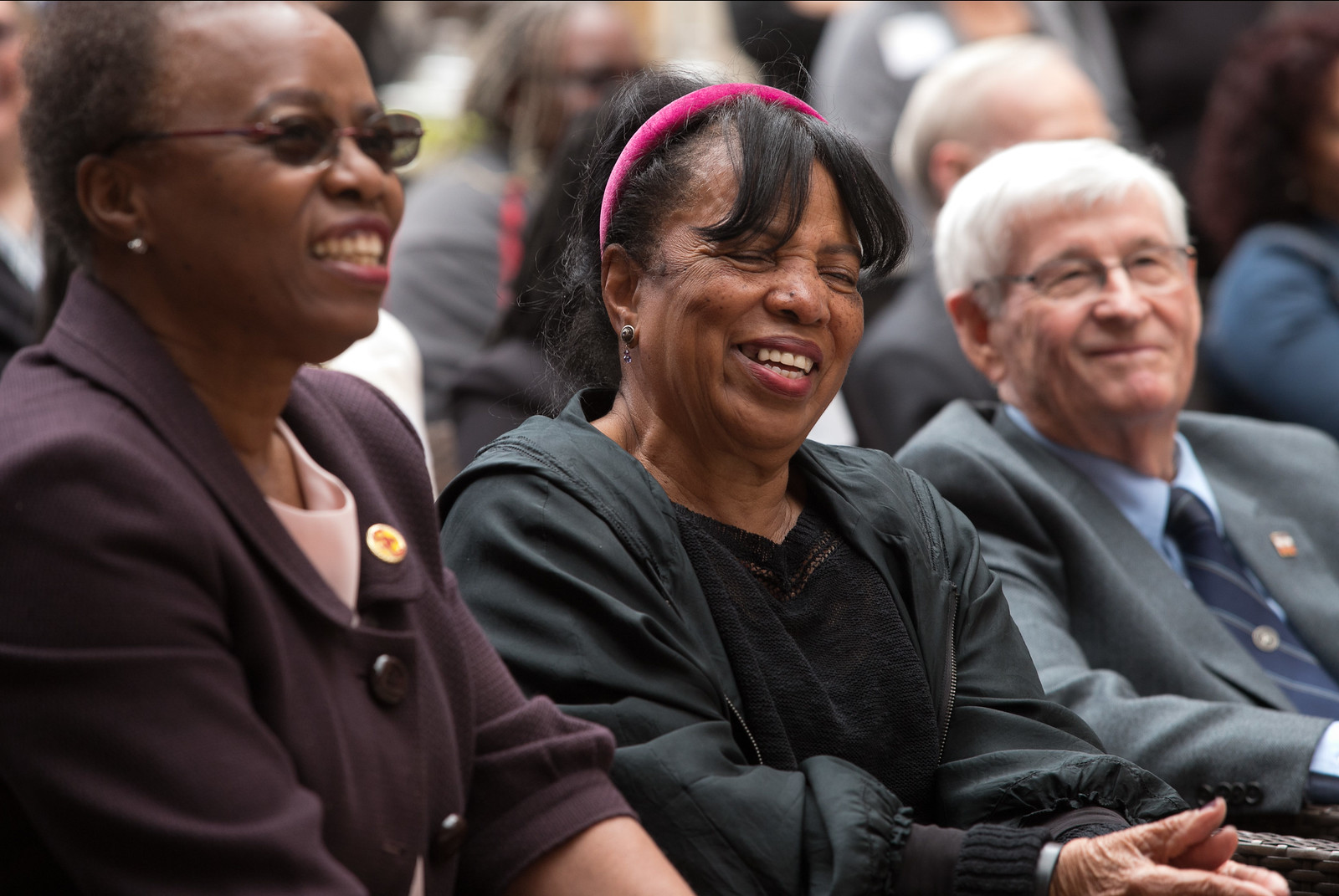 “Connie, as you can see, you made an impact on your friends and family at the Price School and USC, and everyone has really benefited from knowing you,” Knott added. “I hope you know how much you mean to all of us and to me personally.”

USC interim President Wanda Austin joined Knott in proclaiming Rodgers honorary Dean of the Price School for the day in recognition of her extraordinary tenure at the University. She received a framed proclamation and plaque noting the honor. April 29th has also been named “Connie Rodgers Day” at USC Price. 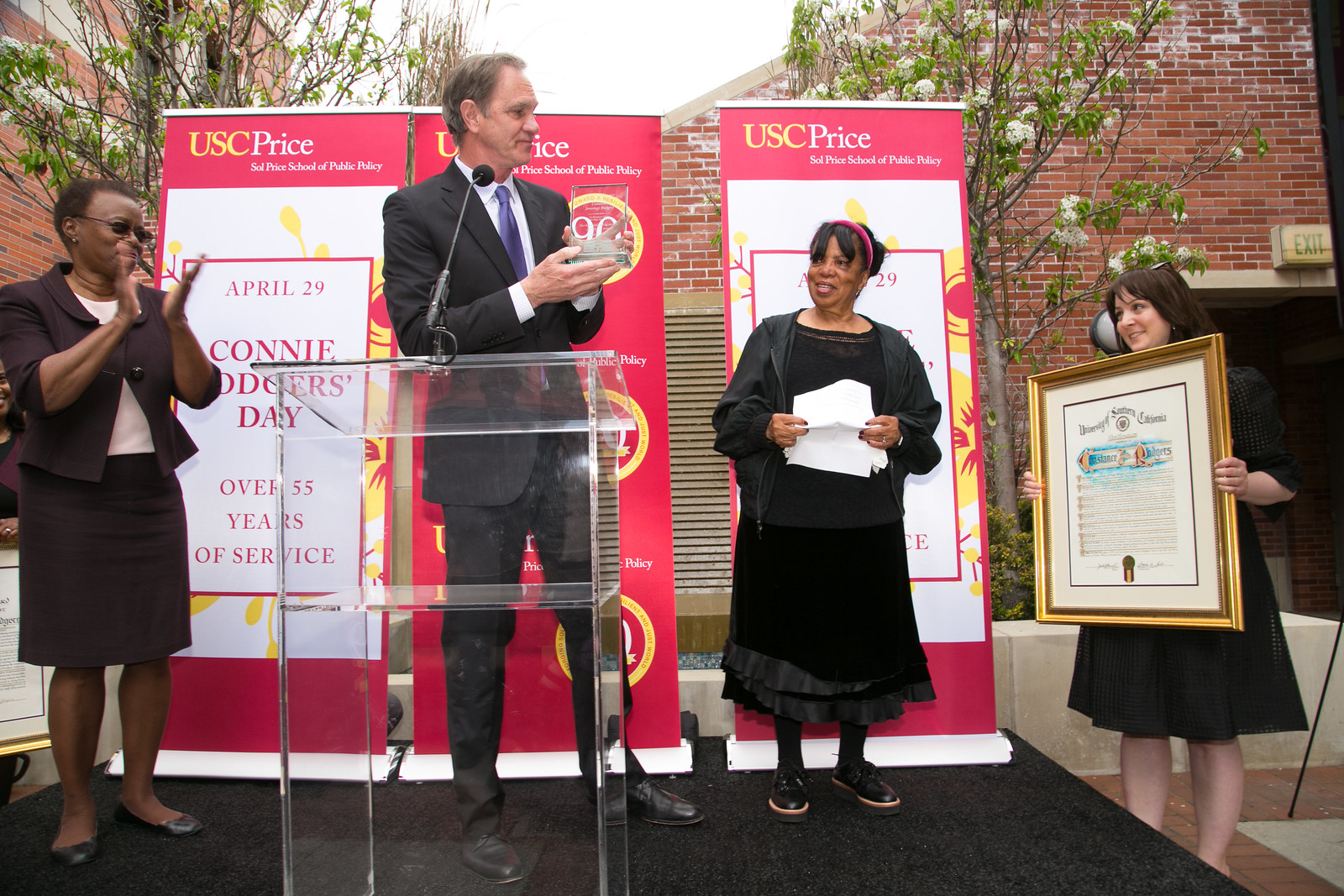 “Most of us don’t do anything for 56 years,” Austin said. “This is truly someone who is remarkable, and we’re very lucky to have had her here as part of the Trojan family taking care of many of us. … She is the living embodiment of dedication to mission success. For more than 55 years, she’s been a shining example of the very best our Trojan staff has to offer.”

When Constance Jennings Rodgers began working at USC on April 15, 1963, John F. Kennedy was President of the United States and Beatlemania was just beginning.

She talked about how she got the job, starting with seeing an advertisement in the newspaper for a secretary. She applied and came by to take a typing and spelling test, impressing the lady doing the hiring by typing 65 words without an error and spelling the word “pneumonia.”

“Dear USC family and friends, I am touched by your presence today at my celebration,” Rodgers said. “As you are aware, I have worked here in the same department for 56 years and I am thankful to USC for the opportunity to serve this long.”

USC Prof. Dan Mazmanian, a former Price School Dean, recalled that Rodgers often would come in on Saturday and Sundays. He told her he didn’t want to see her coming in on weekends, but he joked that the only solution he could find was that he stopped coming in on weekends.

Mazmanian was one of three former Price School Deans at the celebration, along with Jane Pisano and Ross Clayton. They all joined Knott and Rodgers for a photo.

“Connie basically kept the office running,” Pisano said. “She’s the one who educated all the deans, as far as I could see. She really made herself a fountain of information so she could share things the way alumni like to know – who had babies, whose dissertation was now in a book. The Trojan family is a precious concept, and it really only fully gets activated when there are people like Connie breathing life into it.”

Price faculty presented Rodgers with $2,100 for her to take her dream vacation to Paris, a tourist guide, phrase book in French and a Parisian hat so that she goes in style.

Prof. David Sloane remembered when President Barack Obama spoke at USC during his campaign and Rodgers got to meet him, saying “he’s such a nice young man.”

“Classic Constance,” Sloane said. “She is the grande dame of this place.”

Although her official position is executive assistant to the Dean, comments from those on whom she had an impact showed that Rodgers is so much more.

USC Interim Provost Elizabeth Graddy, a former Vice Dean at the School, pointed to Rodgers’ best qualities as her generosity and her judgment.

“She freely and regularly gives of herself to everyone – to students, to faculty and to staff,” Graddy said. “Over the years, she adopted many of us, helped us navigate the School and the University. She stays in touch with the students she’s helped over the years, particularly students of color.”

Graddy added that she can’t imagine the Price School without Rodgers.

“As Vice Dean, whenever I had a thorny issue I’d plop down next to Connie and we would just talk it through,” Graddy said. “Her judgment was always good. It reflected her values and our values as an institution, informed by the deep understanding that she has of who we are as in institution.” 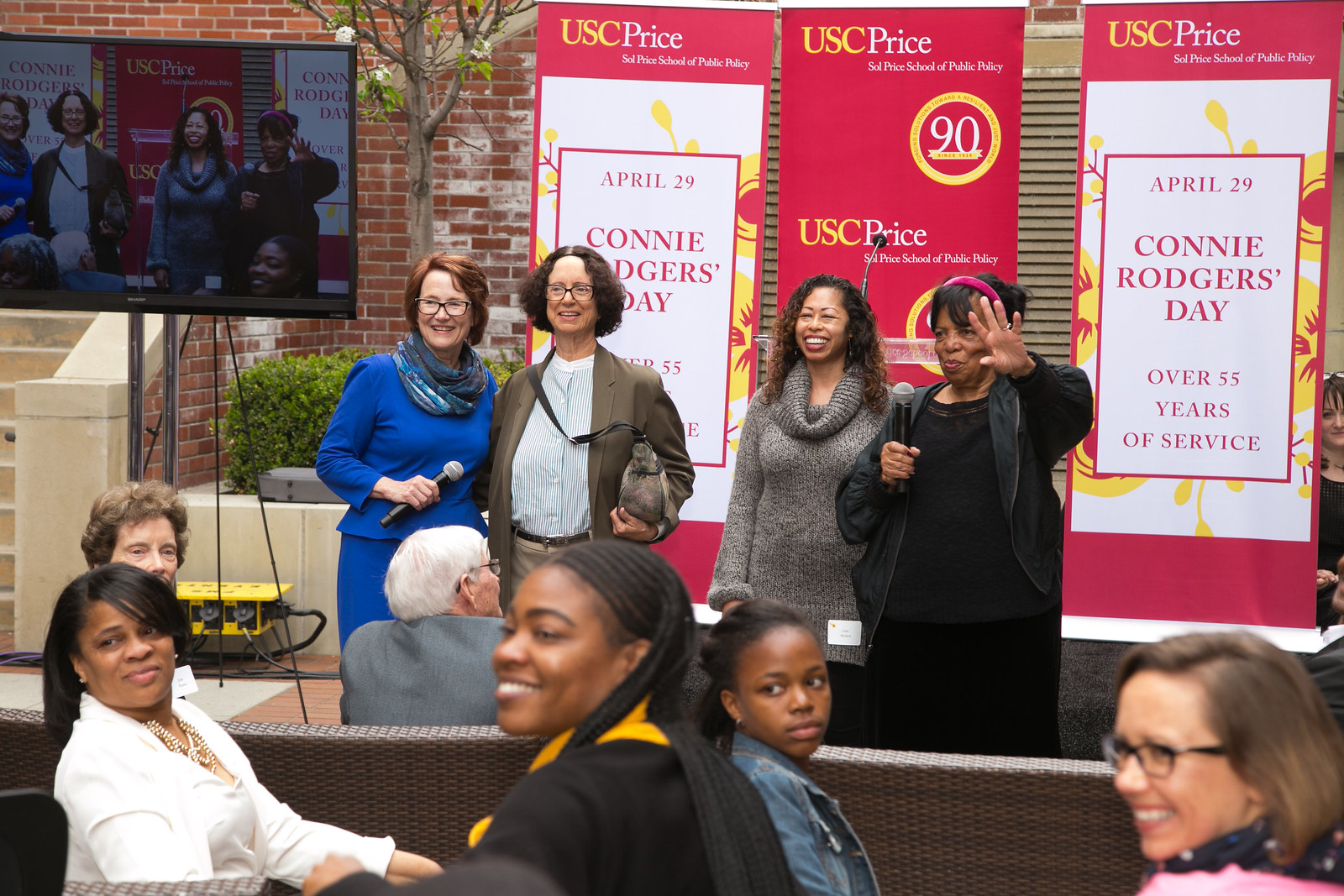 Associate Dean Regina Nordahl recalled a foreign ambassador pulling up in a limousine going straight for Rodgers to thank her for all she did for him during his graduate studies at USC.

Wearing a black suit that Rodgers told him to buy because it can be worn for any occasion, Knott recited a saying that Connie often repeats from her mother, that “you can’t be liked by everyone.”

“As it turns out, Connie, you are the only person I know who is truly liked by everyone, proving your mother completely wrong,” Knott said.

Knott first met Rodgers when he took over as Dean in 2005. He recalled the warm welcome he gave her and his wife, USC Dworak-Peck School of Social Work Associate Dean Cherrie Short.

Knott attested that Rodgers became a mentor and a friend.

“I know when you come in and shut the door, that you’re going to give me advice on what I should do and not do, and how I should behave,” Knott said. “I want to thank you for all of that.”

Rodgers rides the bus from her home in Carson to USC every day, and many of her bus friends attended the celebration.

Also there was her granddaughter, Autumn Brown, who stated that she looks forward to continuing her grandmother’s 56 years as a Trojan when she hopes to attend USC beginning in 2024.

Rodgers called up colleagues, friends and even her hairdresser to give them her personal gratitude.

“When I was hired, the University never promised me a rose garden but it did say that if you come to work you will be paid, and I want you to know I never missed a paycheck and I had a few laughs along the way,” Rodgers said. “Thank you so much. This is something I will always treasure.”