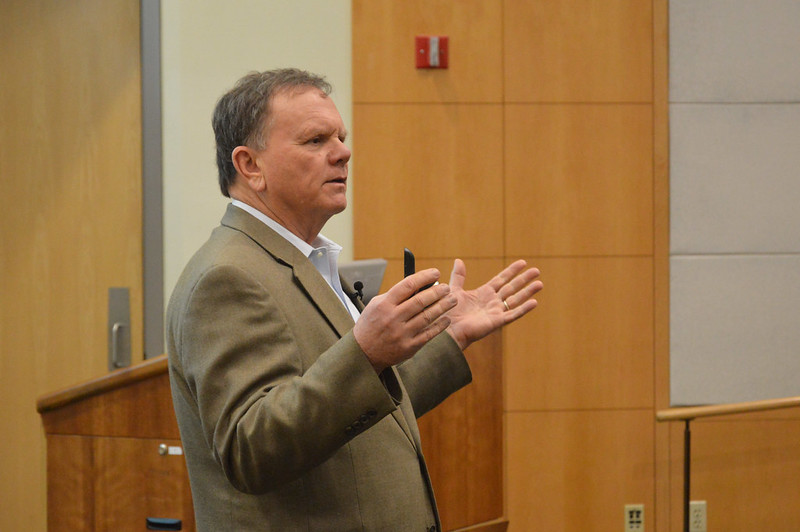 Waste is the gold rush of the 21st century, former California Environmental Protection Agency Secretary Terry Tamminen told students at Lewis Hall in the final event of the inaugural seminar series, Voices for a Sustainable and Equitable Future, offered by the USC Center for Sustainability Solutions.

“It’s already under our feet, and people are paying you to take it,” said Tamminen, who serves as CEO of the Leonardo DiCaprio Foundation. “Imagine if the gold miners came to California in the 1840s and 1850s and somebody paid them to take the gold that was already at their feet.”

“This seminar series aims to provide a platform to inspire students – all the way from freshman to Ph.D. students – because we really believe the discussion of ideas is what helps us create sustainable solutions,” said USC Price School of Public Policy Professor Antonio Bento, who directs the Center for Sustainability Solutions. “I’m very optimistic that this center, by fostering interdisciplinary research teams to solve urban environmental challenges, is going to have a global impact. This seminar series is the first step to creating that community.”

Tamminen began his talk by laying out the challenge presented by global warming and the effort by California to be a global leader in environmental policy. He noted that scientific data show greenhouse gas emissions must peak worldwide by 2020 and decline at least 10 percent a year thereafter, but the Paris agreement only gets halfway to that number.

The economic potential of waste

Tamminen views improvements in the recycling of waste as a key factor to changing the cataclysmic direction of the world. He said that humans are not good at recycling, with most of the U.S. recycling only about 35 percent of recyclable goods, while the best countries in Europe reach 65 percent.

He asserted that 90 percent of waste that goes to landfills could be recycled, and that the facilities exist to sort, treat and repurpose this waste. The reason why there isn’t more reuse is because it is cheaper to buy new materials.

“I actually think that this is the biggest business opportunity in the history of the planet, because much of the stuff that goes to a landfill are resources that we’re burying and then going out to dig up, cut down or otherwise source,” Tamminen said.

How universities can help

He thinks that universities and large companies could play an important role in the future of recycling.

“You can actually make a zero-waste campus,” Tamminen said. “The secret is to do it all in one place – to have the processing facility that sorts it all right on that campus along with the facilities that will turn PET [polyethylene terephthalate) plastic bottles back into PET plastic bottles, or cardboard into usable cardboard.”

Tamminen also talked about waste in electricity, and how the smart city of the future exists in pieces with technology being demonstrated in different places.

“Our future really depends on ending the waste of anything, whether it’s physical waste or electricity,” Tamminen said. “Because we’re going to have 10 billion people on this struggling planet by 2050. The only way we’re going to make this work is by wasting nothing.”