USC Price School of Public Policy alumna La Mikia Castillo describes herself as being “passionate about impacting and addressing issues that have an effect on low-income communities and communities of color.”

It’s a passion rooted in her faith that she brings each day to her role as the national organizing director of the National Foster Youth Institute, where Castillo leads community organizing initiatives aimed at transforming the child welfare system. She also helps create vital opportunities for young people, such as planning a day where foster youth shadow their Congressional representatives in Washington, D.C.

And while she pours her full effort into this work, Castillo admits that she gets “a lot more from all of the young people I get to work with.”

Castillo’s contributions, however, aren’t limited to just the professional arena. She’s also extended her impact into the classroom, working with students as a new adjunct faculty member at USC Price. After being recruited by Professor LaVonna Lewis, Castillo currently teaches PPD 478 Social Innovation for the second consecutive semester.

“She was navigating her career in such a way that she was always involved in cutting-edge efforts to deal with tough populations,” Lewis said. “And so I thought that that spirit of innovation was something that was needed specifically for the class that she was asked to teach.”

For Castillo – who was born and raised in Los Angeles, as the oldest of 11 children – the issue of foster care is an especially important one, tracing all the way back to her childhood. Castillo was influenced by the experiences she had with the many foster children raised by her grandmother.

“She just had a heart for children,” said Castillo of her grandmother. “She fostered teenagers when my mom was younger, and then she fostered babies when I was younger. She adopted three.”

Castillo went on to become the first in her family to attend college, and set her sights on becoming a social worker. But since her school, UC San Diego, didn’t offer an undergraduate degree in social work, Castillo enrolled as a psychology major. Though, she quickly realized that it wasn’t the right fit for her.

“It focused more on the sciences in the brain, and I was more interested in the care of kids,” Castillo explained. “How do you focus on making sure that families have the resources that they need, that communities are thriving, so kids can live in safe environments?”

She changed her major to ethnic studies, then added a double major in urban studies and planning. Newly inspired, she shifted her aspirations to community organizing, advocacy and policy work. After graduation, she spent three years serving as a community organizer at Clergy and Laity United for Economic Justice (CLUE). There, she worked on two successful campaigns, resulting in the first security officer union in the City of Los Angeles, and a living wage for hotel workers on Century Boulevard.

While continuing to work full-time at CLUE, Castillo started a new part-time job as the advocacy coordinator for the California Black Women’s Health Project, a nonprofit dedicated to increasing awareness around health disparities impacting communities of color. At the organization, her duties ranged from helping alumni of an educational fellowship for 18- to 24-year-old women continue their activism beyond the program, to advocating for the moratorium on fast food in South L.A.

Making the most of the Price experience 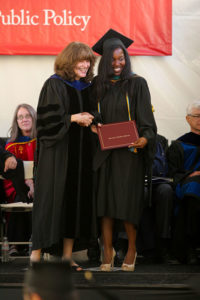 Castillo was drawn to USC by both its academic excellence and the spirit of the Trojan Family.

“When I went to the Price School to visit, it didn’t feel like I was just going to learn from professors,” said Castillo, who also earned graduate certificates in public management and political management, and completed the Ross Minority Program in Real Estate. “It felt like there was a community of individuals who cared about my professional growth, my personal growth and my educational growth.”

During her first semester, she contributed to the Trojan Family as the founding member and president of the Association of Black Students in Policy, Planning and Development — a new organization serving both graduate and undergraduate students at Price. She then became president of the university-wide Black Graduate Student Network.

She was also a founding member of two other USC Price organizations: Women Leading Policy, Planning and Development (now Price Women and Allies); and the Partnership for an Equitable Los Angeles (PELA). In addition, she became involved in Graduate Student Government and in the USC Price Latino Student Association, and worked as a research assistant for professors LaVonna Lewis and David Sloane.

During graduate school, Castillo earned an Education Pioneers Fellowship, which allowed her to analyze disparities in the Los Angeles school system. She remained involved as a volunteer recruiter for Education Pioneers, encouraging people of color from low-income backgrounds to apply for the fellowships. She then joined the staff of the organization for three years in a variety of roles, most recently as associate director of the western region.

One of the highlights of her USC Price experience, Castillo said, was the Policy Analysis Practicum, a consulting project for a real-world client. With mentorship from Associate Professor Juliet Musso and Christopher Weare, Castillo and her fellow students examined the decline in the number of foster care youth for the Public Policy Institute of California. Castillo with her husband and Christina Gutierrez at Standing Rock

Beyond professional and academic obligations, Castillo offers her time through Price’s mentor program, engaging with a student one-on-one and passing on key lessons.

Castillo and her mentee, USC Price master’s student Christina Gutierrez, even traveled to Standing Rock this past November, to stand in solidarity with the Sioux and their allies in protest of the Dakota pipeline.

Castillo called the experience “spiritual,” while adding, “This is a sacred space. You’re walking into a prayer ceremony when you walk onto the campground, which is not at all the way that it’s portrayed in the media.”

Through Castillo’s encouragement and example, Gutierrez decided to take up dual MPA and MPL degrees, pursue an Education Pioneers Fellowship and become the vice president of Graduate Student Government.

“Just having her as a role model as a woman of color is really powerful for me,” Gutierrez said. “I’m really excited that she’s teaching courses at Price right now. She applies her passion for justice and equity, and that’s something that students can really benefit from at Price.”