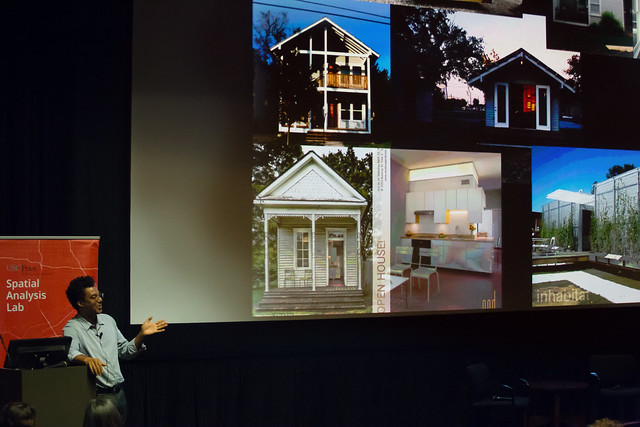 USC Price School of Public Policy Associate Professor Annette Kim had a vision to bring the seemingly disparate areas of art and urban planning together.

She brought that vision to fruition by starting the Spatial Analysis Lab (SLAB) at USC. The lab’s first major event, a three-part series titled “Urban Visions: Art as Social Practice,” explored the ways in which ubiquitous elements of city life somehow seem invisible.

The series, which took place in late September and early October in collaboration with the USC School of Cinema and paid for with a grant from USC Visions & Voices arts and humanities initiative, featured a lecture from social-practice artist Rick Lowe, who also led a student tour of African American arts and culture in the Leimert Park area of South Los Angeles, and a workshop with a digital media arts exhibition that SLAB mounted.

“Rick’s work has a similar orientation to SLAB in being concerned about larger-scale social justice issues while also focusing on the ground level of people in the city, maintaining a humanistic perspective on the stories and value of people,” Kim said. “That’s one of the unifying aspects of the artists’ work in the exhibition as well.”

Lowe first brought his artistry to community development in 1994 at Project Row Houses in Houston, where he took 22 small rundown shotgun houses that were otherwise going to be torn down and turned them into other uses such as transitional housing for single mothers, artist residency spaces and educational programs. Project Row Houses transformed the neighborhood as well as the residents.

He challenged the single mothers to think of themselves as a work of art, that they were sculpting their own lives every day with the choices they’re making.

“In housing development, the end goal is butts in beds,” Lowe said. “As an artist doing housing, again people in beds is an interesting thing but the ultimate plan is to create something that has a poetic quality that can resonate in a symbolic way with people, so that they can create a narrative around it and show the different possibilities of humanity.”

“Trans.lation” in the Vickery Meadow area of Dallas is another Lowe project. This neighborhood was considered dangerous to walk around, and where the diversity of the people created fear and misunderstanding.

His project started with community dinners accompanied with interpreters so that neighbors could better communicate with each other. The magic he witnessed through this interaction led to other community events such as asking people to bring the food from their culture for a neighborhood potluck, then a neighborhood talent show. Later, they placed 12×12 foot white cubes throughout the neighborhood that community members could use for art exhibitions.

In the Opa-Locka area of Miami, Florida, Lowe soon hopes to take his artistic community approach to another level with a public-art project that has a goal of integrating art into the every-day, engaging residents and business. They would train people to paint and decorate their properties, serving as facilitators and teachers to help them give their neighborhood a new aesthetic identity.

“Unleashing the creativity of a community to me is the most incredible and valuable part of the work I do,” Lowe said. “I get to be a facilitator for other people to find that part of their lives.”

In addition to the lecture, Lowe led a workshop for participants to discuss their own ways to bring art into the community.

“Rick Lowe exemplifies one of the most exciting frontiers for urban community development, the blurring of urban planning and art practice,” Kim said. “Many of the activities of his Project Row Houses are similar to what planners try to do: harness local community human resources and strengths, negotiate with larger city institutions, develop affordable housing, etc. But he does this in a completely different way that catalyzes the wonders and potential of local people.” 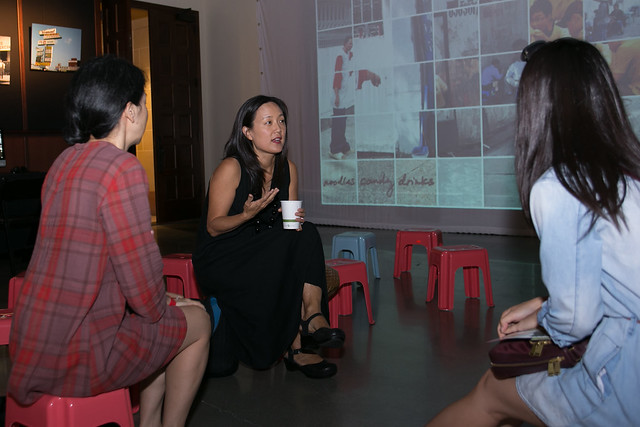 Kim presented her own cinematic-map project on street vendors working the sidewalks of Ho Chi Minh City in Vietnam as one of the four exhibits using art practice and digital media to re-narrate the everyday, lived city. Kristy Kang, who serves as associate director of SLAB, offered an interactive web platform providing the sights and sounds that tell the story of the cultural history for the multi-ethnic identity and development of L.A.’s Koreatown.

Two representatives of the USC Annenberg School for Communication and Journalism filled the other walls of the exhibition. Associate Professor François Bar offered a collaborative map of healthy food and activities in South Los Angeles. Doctoral student Nonny De La Peña used an Oculus Rift to immerse people in the experience of having a diabetic man collapse into a seizure in front of them because of a blood-sugar drop while waiting in the long lines of a food bank.

“What’s interesting to me with all the buzz around digital media, art and technology, and the city, is that a lot of times what’s produced has been either about entertainment or producing a smart city in a heroic future,” Kim said. “That doesn’t seem very inclusive to the variety of people in the city right now. I think that’s something in common with all of our projects — that they focus on the real and often overlooked people in the city.”