Dean Jack H. Knott explained that it was at City Hall where the first classes were held by what was originally called the USC School of Citizenship and Public Administration, reflecting the founders’ interest in civic engagement and the role of citizens in public policy. “They didn’t want a government that aggrandized itself, but rather one that worked to improve the quality of life for people and their communities,” Knott said. “That mission still defines our school to this very day. We take an interdisciplinary approach to solving the governance, planning, development and policy issues confronting society.”

Near the end of the Progressive Movement, citizens’ and women’s groups asked USC to help educate public officials with the goals of improving governance, reducing corruption, and engaging citizens and business leaders in the political process.

On Feb. 28, 1929, the USC Board of Trustees authorized the establishment of the school, which became only the second public affairs school in the nation and first in the West.

USC Provost and Vice President For Academic Affairs Michael Quick joined Knott in crediting USC Price’s many partnerships with local and state government, nonprofits, businesses and community members for making it one of the great public policy schools in the country.

In 2018 the Price School was named the No. 2 Public Affairs school in the nation by U.S. News & World Report, and once again No. 1 in the West.

“The Price School has an extraordinary biography,” Quick said. “From the early days of teaching classes [at City Hall], to now transforming skylines of every major city in the country through its real estate program, to leading some of the nation’s top nonprofit and advocacy groups, to serving as elected officials in every branch and level of government, and to administering some of the largest health care systems – and they’re doing this not just locally and not just nationally, but around the world.”

Knott also thanked the Price family for their incredible investment and commitment in the school in the name of the late Sol Price, who was dedicated to improving the quality of life for low-income communities, immigrants and diverse populations.

Knott asserted that the Price School produces alumni who plan, finance and build vibrant cities, supporting the fundamental development needs of a community – homes, jobs, schools, efficient transportation, access to health care and spaces to enjoy with loved ones.

These alumni aren’t just making an impact in Southern California, but worldwide. “Almost from the beginning, we were providing consulting on urban planning and design, and training public administrators and leaders, around the world,” Knott said. “In Asia, the Middle East, South America and Europe, it’s remarkable how many people in leadership positions today were educated in part by the Price School.”

Quick stressed that the Price School is not only turning out great leaders in real estate and public service, but also significant scholarship.

“The faculty of Price are leading the scholarship that is inventing the future and changing the 21st century,” Quick said. “I am so very proud of what our faculty scholars do every day using evidence-based research and policy analysis to inform decision makers and solve complex challenges.”

Now with 16 research centers and institutes, the Price School is a key source for unbiased, evidence-based research findings that influence policy formation and implementation.

Knott credited the school’s amazing research centers, the largest of which is the Schaeffer Center for Health Policy and Economics, for the policy analysis their scholars produce.

Leonard D. Schaeffer, a USC Trustee and Judge Robert Maclay Widney Chair who endowed the Center, congratulated Dean Knott on the growth and increases in funding the school has experienced in his 14 years leading the Price School.

“In my personal opinion, attending the Price School is most important in terms of motivating all students to become engaged citizens who understand how public policy is made and will use that to improve and increase the public good,” Schaeffer said. “For all of these reasons, I think we can all be proud of this outstanding school and its contributions, both as an institution and in terms of its graduates, and the positive impact it has had here, across the country and around the world.” 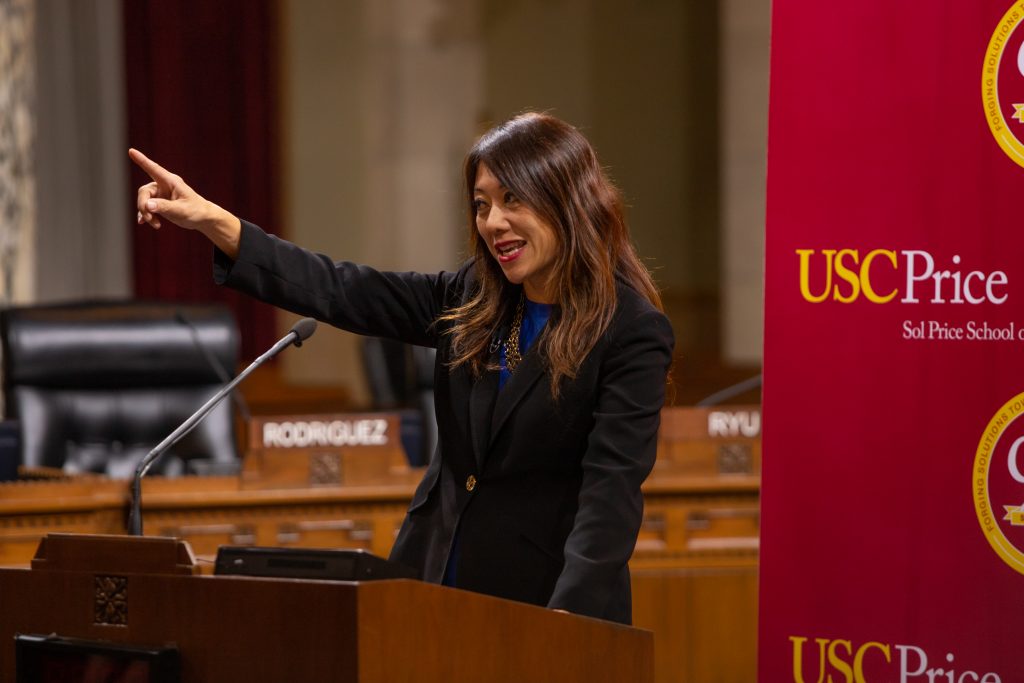 California State Treasurer Fiona Ma and State Senator Maria Elena Durazo offered their congratulations to the school and spoke of their goals for California and how USC Price faculty, students and graduates can contribute.

“As we wrestle with 21st century challenges such as housing affordability, quality education and access to health care, we need powerful but new ideas, so this is a perfect place to make that challenge, as a group, as a school and as individuals,” Durazo said. “I challenge you to tackle your research with an inventive lens, to work in our community with labor, with elected officials and with nonprofits to have a real impact on improving the quality of life for all residents of Southern California and across the world. Here’s to another 90 years of success and impact.”

Ma noted that new California Gov. Gavin Newsom has put forth an ambitious goal of building 3.5 million homes in the state by 2025.

“We need housing,” Ma said. “People need to have homes that allow them to work near where they live. So that is my challenge to all of you, to help us in California to get to that goal. We all need to work together, we need to get out of our comfort zone, we need to compromise a little bit, work with the legislature, work with local governments, work with all the stakeholders here to get that done.” Knott looked forward to the decade ahead that will bring the Price School to its 100th year, and promised a year of substantive 90th anniversary events focused on some of the most pressing policy, planning and development issues faced by society.

“Throughout the coming year, we will celebrate the achievements of the past nine decades, advancing our goals for academic distinction, strengthening diversity and inclusion, and elevating our global footprint,” Knott said. “We want to improve communities and public policy for the better, and we look forward to innovating approaches to educating the next generation of leaders in the public and private sectors to become a truly global school in public policy.”