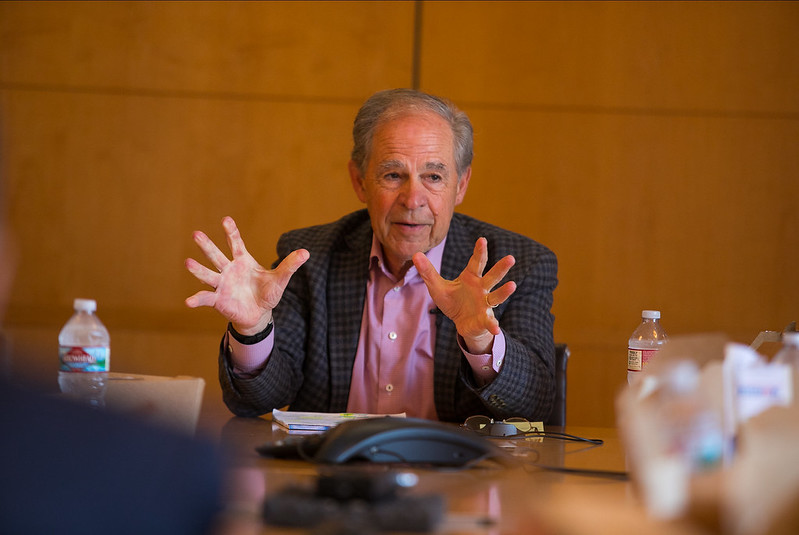 The most fundamental and important insight USC Price School of Public Policy Professor Mark Pisano took from his research into an aging population is that no one is disposable.

Given the decline in the growth of the working-age population – 30 percent for the first three decades of the millennium – and because most of the growth in the U.S. population is among those over 65 years of age, the nation’s economic future will depend on better utilization of our human resources.

Presenting findings from his recent book, The Puzzle of the American Economy: How Changing Demographics Will Affect Our Future and Influence Our Politics (Praeger, 2017), at a Price School conversation on April 26, Pisano asserted that the only way the country will be able to supplement the lost revenue of an aging workforce is by developing every single individual. Using large data analysis, he calculated the actual financial penalties: income not realized, consumption not increased and reductions in taxes paid by individuals. Surprisingly, these penalties had a greater influence than fiscal and monetary policies. For example, GDP in 2016 would have been $468 billion higher, or a 4.5 percent GDP, predicted by President Obama’s economic advisors and not the 2.1 percent experienced.

“Mark has been doing research and asking important questions about the future of California and the country.” said USC Price Dean Jack H. Knott. “With this new book, he’s looking at the broader implications of significant demographic changes and their implications for our economic growth, but also our need of ways for financing and providing government services. Economists and sociologists have been talking about the relationship between demographics and the economy, but Mark has a fresh and innovative new look at this longstanding issue.” Filling the void left behind by baby boomers

Pisano explained that the population shifted from a demographic bonus to a demographic penalty in 2001, which is when the baby boomer generation reached an average age of 55. The percentage of the population in the working age group of 15 to 64 is shrinking as the baby boomers age due to three factors: a plummeting fertility rate, increased longevity and fewer immigrants.

Pisano noted that there are 12 million people of working age in the population that, for one reason or another, are not working. The public sector needs to find a way to get them into the workforce to replace retiring baby boomers, because 90 percent of all government revenue in the U.S. come from the taxing of individuals.

The impact to the national economy of this one demographic variable is four times larger than the income effect of losing manufacturing jobs abroad over this period.

The value of immigrants In addition to policies that lead to inclusion in the workforce, Pisano called for strategic immigration programs in which people, who come to this country to get an education, get started on a path to citizenship.

“We’re clearly going to need to be a society that allows more immigrants to come into our country in order to replenish our working population,” Pisano said. “If we’re not reproducing ourselves, then we’re going to need some supplemental forces.”

Pisano noted that, while he’s worried about this “ticking time bomb” in American society and is concerned that politicians are dismissing this issue, thinking that these declines in economic growth and public revenues just won’t happen, he remains optimistic for the country’s economy. This demographic transformation is global, and he believes the United States will better be able to manage this issue than most other countries that are facing the same problems.

“The way out of this situation is we take this notion of dependence, which we have a lot of in our society, and we reframe that as interdependence,” Pisano said. “We have the political system that gives us a chance to do that, and if we can use the system for that purpose then I think our golden days are still ahead of us.”