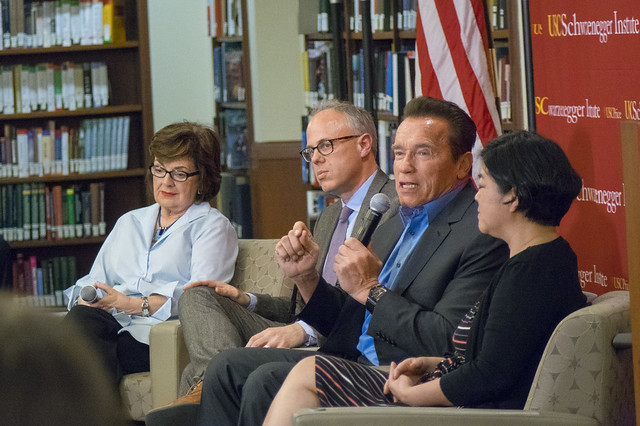 Arnold Schwarzenegger and David Daley join Chris Carson, far left, from the League of Women Voters and Kathay Feng of Common Cause at a USC panel. (Photo by Deirdre Flanagan) More photos available on Flickr »

Amid the protests and marches following the November elections, the sentiment among many people nationwide has been to question how the results went contrary to the will of the majority of voters. While it has become common to blame geography and the Democratic clusters in big cities that gave Republicans the advantage, best-selling author David Daley asserts that savvy Republican strategists decided the election by reinventing one of the oldest political tricks in the book — gerrymandering.

The USC Schwarzenegger Institute for State and Global Policy, housed at the Price School of Public Policy, collaborated with Common Cause and the League of Women Voters to host Daley on Jan. 31 at USC’s Doheny Library in a discussion on national political reform and redistricting.

“Redistricting is a huge political issue in the country that has shaped the nature of our politics,” said USC Price Dean Jack H. Knott. “In terms of civil rights, it has been used to discriminate against minority groups. It’s also been used to create the kind of incumbency protections that we have; so that in many states, the majority of legislators do not even face any competition, which has led to the terms limit movement in several states. And, in many ways, it’s led to the polarization we face as a country.”

As California’s 38th governor, Arnold Schwarzenegger helped gain approval for a citizen redistricting initiative that took away the drawing of district lines from lawmakers. USC Schwarzenegger Institute Global Director Bonnie Reiss explained that it “is really our belief, and Arnold’s belief, that democracy works best when there’s accountability for our leaders and when the voters pick the political leaders — not the political leaders pick who their voters will be.”

Schwarzenegger, who live-streamed the discussion to 6,000 viewers on his Facebook page, noted that in the decade prior to California’s implementation of citizen redistricting in 2010, only one incumbent lost a seat in more than 500 elections. Since then, there has been a 26 percent turnover.

Schwarzenegger explained how “today’s event is all about one thing” — and that’s to catalyze a national campaign for redistricting reform. “USC is a great place to launch this whole thing. I think we can go nationwide with this and bring some sanity to our political system.” He also pointed out that, while Daley’s book focuses on “Project REDMAP,” where republican strategists used gerrymandering to fix the game in their favor, gerrymandering is and has been used by both parties more interested in protecting their seat than being accountable to the voters. Schwarzenegger remains committed to redistricting reform that creates a fair system and does not favor either party, but puts the will of the people first. 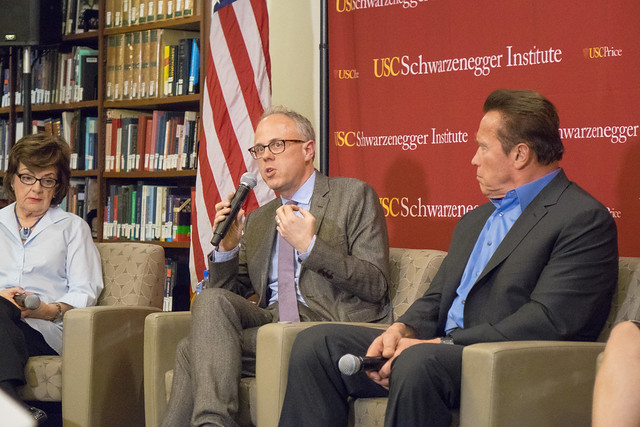 By targeting relatively inexpensive state races in 2010, Jankowski, with support from Karl Rove and other Republican strategists, was able to flip the majorities in 16 state legislatures from Democrat to Republican just in time for them to control drawing the district lines following the 2010 census.

Gerrymandering has been going on since the 18th century, but with new technology from micro-targeting and computer-aided mapping techniques, it entered what Daley called the steroids era.

After election day in 2010, Republicans controlled the drawing of 193 Congressional seats, Democrats controlled 44 and independent commissions determined 88. It was a dramatic reversal from the previous decade that favored Democrats 135 to 98. 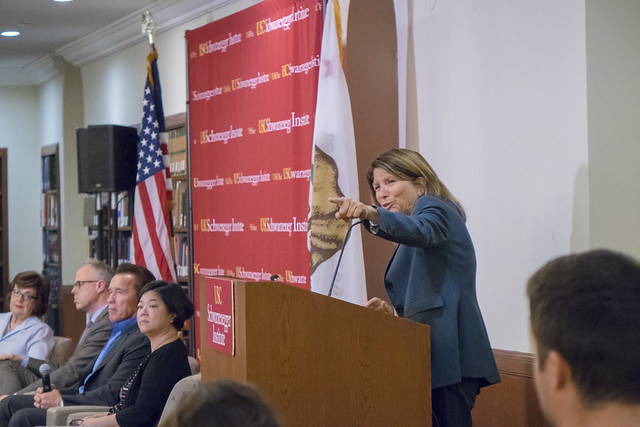 “The plan worked, as is proven by the Republican monopoly in Washington and the super majorities in statehouses nationwide, often achieved with fewer aggregate votes,” Daley said. “But it has also had dramatic unforeseen consequences for our politics, which have become more extreme, more polarizing and, most dangerously, more insulated from the ballot box than perhaps any time in our history.”

Republicans succeeded in gerrymandering many of the swing states from the Presidential election — Pennsylvania, Michigan, Ohio, Florida, North Carolina and Wisconsin. In 2012, once the gerrymandering was complete, the Republicans won 13 of the Pennsylvania’s Congressional seats to five for the Democrats despite receiving 100,000 fewer votes.

Daley contends that the gerrymandered legislatures impacted Trump’s election despite losing the popular.

“When our democratic institutions become separated from popular will, they cease to be effective,” Daley said. 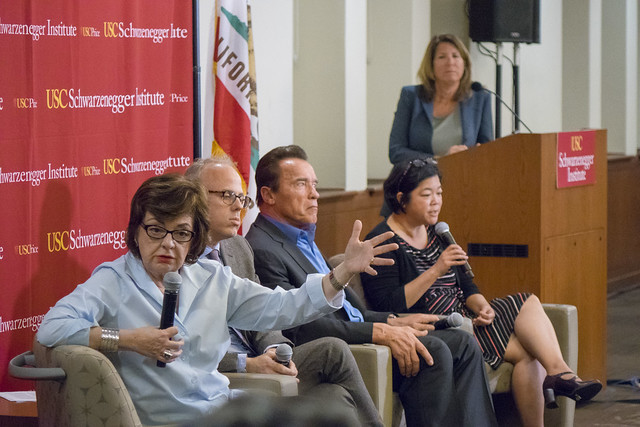 Chris Carson, president of the League of Women Voters, responds to a question. (Photo by Deirdre Flanagan) More photos available on Flickr »

Kathay Feng, national redistricting director of Common Cause, and Chris Carson, president of the League of Women Voters, joined Daley and Schwarzenegger to provide an overview of reform efforts. Congressional lines won’t be redrawn again until 2022, leaving legal challenges such as one in Wisconsin as the best hope for quick reform.

Schwarzenegger noted that he is an optimistic person who has seen the country go through many major problems since he arrived in 1968 during the Vietnam War. He believes that political reform regarding redistricting can and will happen starting at a grassroots level.

“We’re going through some difficult moments right now as we have in the past, but I guarantee you that we will work our way out of this,” Schwarzenegger said. “The reason I believe that is I know the American people are not people who just sit in front of the television set and complain. They go and become actively involved, because they know that democracy is not a spectator sport.”