For the USC Price School of Public Policy, the USC Global Conference in Shanghai set the stage for a series of events, meetings and partnerships throughout China.

“China is a hugely important partner, primarily because they face so many of the same public policy issues that we do,” Dean Jack H. Knott explained. “And together, the U.S. and China can help shape these issues globally.” 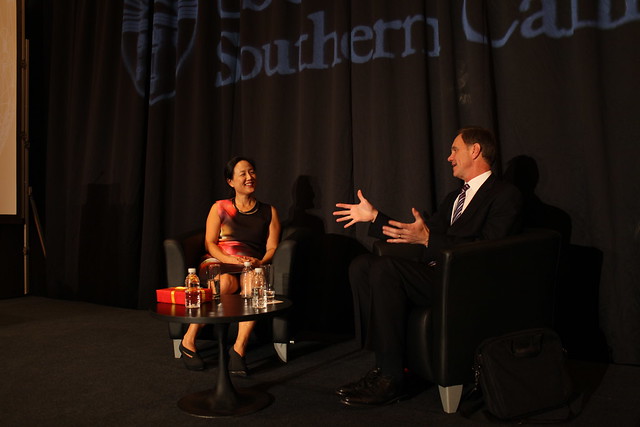 Associate Professor Annette Kim with Dean Jack Knott at their talk as part of the USC Global Conference.

“For the first time in human history, most people are living in cities, and that’s because of people moving there. Urbanization is migration and immigration,” said Kim, director of the Spatial Analysis Lab (SLAB) at USC Price. “We’re all trying to live in the same place that’s getting much denser and more crowded. But we’re still trying to make a city like it was in the 1970s, when the conditions were very different. We have to live in the city in a different way.”

Kim described how this urban challenge has given rise to informal economies, ranging from sidewalk businesses in Saigon to an underground housing market in Beijing.

“They’ve been called the ‘rat tribe,’ these people who live underground,” said Kim of the approximately one million people who live in basements and bomb shelters in Beijing. “One of the videos we made follows a woman, who lives underground, as she goes up the two flights of stairs to above ground and walking to work. She just blends in as a normal person. She’s not the scary ‘other.’ That’s why visualizations are powerful for public policy and discussion.” 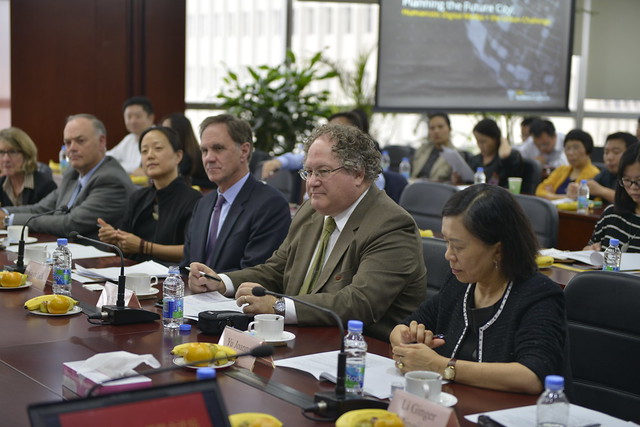 Price faculty participated in the Shanghai Symposium on Housing and Healthcare.

Kim made similar observations on the housing panel of a workshop with the Shanghai Municipal Development and Reform Commission.

Professor Mike Nichol served on the workshop’s health care panel, highlighting parallel challenges in the U.S. and China. In both countries, he predicted that people will become increasingly accountable for their own health care decisions — because of the rising out-of-pocket costs in the U.S., and the modest level of reimbursement in China.

“It’s really remarkable how much interest there is on the part of some of our Chinese colleagues, as well as some of the institutions there, about being able to really address these issues in a shared way,” said Nichol, Price’s director of graduate programs in health and interim vice dean for faculty affairs.

Knott delivered the workshop’s opening remarks, and Professor Eric Heikkila – Price’s director of international initiatives – closed with a summary of the day’s progress. The event was organized by the USC U.S.-China Institute.

Professor Eric Heikkila speaks at the symposium in Shanghai.

Following the Shanghai events, Heikkila, Nichol and Professor Najmedin Meshkati from the USC Viterbi School of Engineering led a workshop advising Fuzhou University on how to establish an Institute for Emergency Management.

“The goals of the forum are to create research collaborations across the three schools, synergies across three leading state actors in the energy transition, and policy dialogues with practitioners in advancement of the demanding greenhouse gas reduction objectives being articulated around the globe,” Mazmanian said.

“At the institutional level, this forum provided a key opportunity for USC, the Price School and the Schwarzenegger Institute to be involved in international engagement, research and ideas,” Mazmanian said. “And for faculty and for our graduate students to be able to develop peer-to-peer relationships through the forum is very important too.” 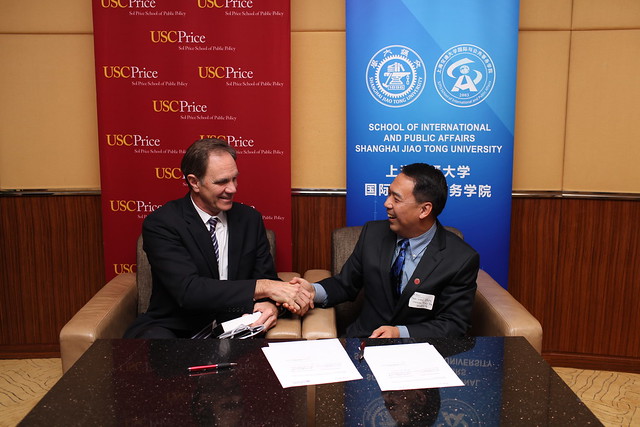 Throughout the trip, USC Price deepened existing relationships and forged new ones with key universities and organizations.

In Beijing, USC Price discussed potential collaborations with Renmin University of China and Peking University. In addition, Heikkila met with Bert Hofman, the World Bank’s country director for China, Mongolia and Korea in the East Asia and Pacific Region, and with President Li Xiaojiang of the China Academy of Urban Planning and Design.

“There’s an affirmation of the direction that Dean Knott has established for the Price School, which is to actively explore collaboration on academic programs with high-quality institutions overseas,” Heikkila explained. “This trip in particular has demonstrated the great potential in this area, because more and more institutions overseas are now also beginning to recognize that their own institutional agendas are best advanced through collaborative engagement.”

Knott noted, “China has been making huge investments in public policy and public administration education and research. They’re a terrific partner for us, and it was a very productive trip.”