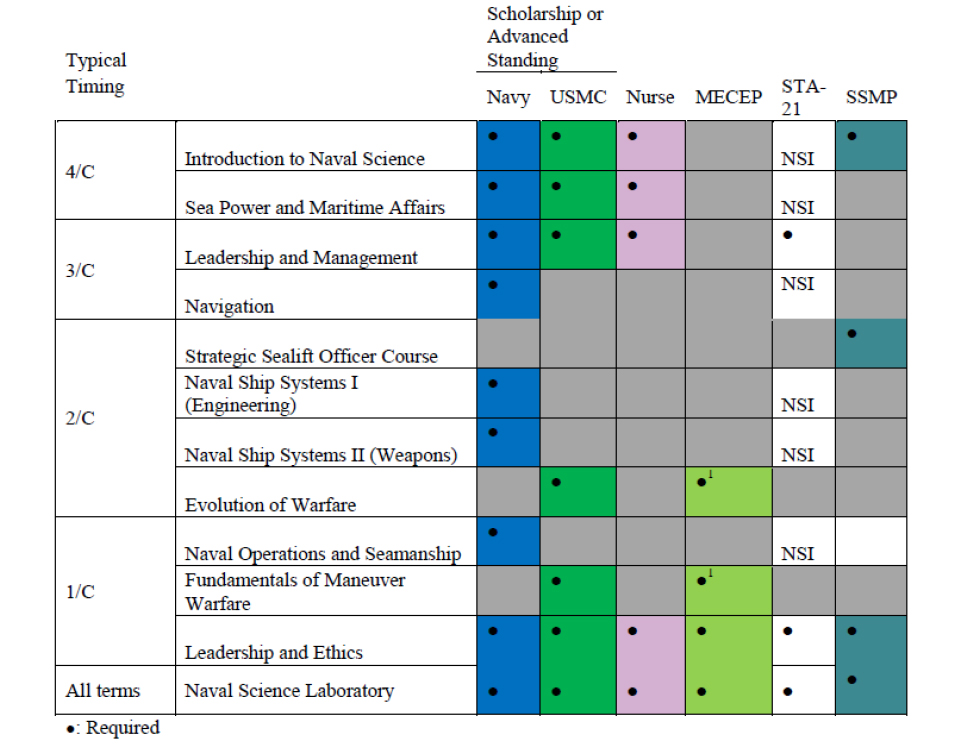 INTRODUCTION TO NAVAL SCIENCE – This course is a general introduction to the USN and USMC that emphasizes organizational structure, warfare components and assigned roles/missions of USN/USMC. It covers all aspects of Naval Service from its relative position within the DoD to the specific warfare communities/career paths and includes basic elements of leadership and USN and USMC Core Values. The course provides students with initial exposure to many elements of Naval culture and provides the conceptual framework/working vocabulary for students to use on summer cruise

SEA POWER AND MARITIME AFFAIRS – This course is a study of the U.S. Navy and the influence of sea power on history that incorporates both a historical and political science process to explore the major events, attitudes, personalities, and circumstances that have imbued the U.S. Navy with its proud history and rich tradition. It deals with issues of national imperatives in peacetime, as well as war, varying maritime philosophies that were interpreted into Naval strategies/doctrines, budgetary concerns which shaped force realities, and the pursuit of American diplomatic objectives. It concludes with a discussion of the Navy’s strategic and structural changes at the end of the Cold War and its new focus, mission, and strategy in the post-September 11, 2001 world.

LEADERSHIP AND MANAGEMENT – The course introduces the student to many of the fundamental concepts of leading Sailors and Marines, which shall be expanded upon during the continuum of leadership development throughout NROTC. It develops the elements of leadership vital to the effectiveness of Navy/Marine Corps officers by reviewing the theories and parameters of leadership and management within and outside of the Naval Service and progressing through values development, interpersonal skills, management skills, and application theory. Practical applications are explored through the use of experiential exercises, readings, case studies, and laboratory discussions.

NAVIGATION – This course is an in-depth study of the theory, principles, procedures, and application of plotting, piloting, and electronic navigation, as well as an introduction to maneuvering boards. Students learn piloting techniques, the use of charts, the use of visual and electronic aids, and the theory of operation of both magnetic and gyrocompasses. Students develop practical skills in plotting and electronic navigation. Other topics include tides, currents, effects of wind/weather, voyage planning, and an application and introduction to the international/inland rules of navigation. The course is supplemented with a review/analysis of case studies involving moral/ethical/leadership issues pertaining to the concepts listed above.

EVOLUTION OF WARFARE (MARINE OPTION ONLY) – In this course, students trace the development of warfare to the present day. It is designed to cover the causes of continuity and change in the means and methods of warfare. It addresses the influence of political, economic, and societal factors on the conduct of war, with significant attention focused on the role of technological innovation in changing the battlefield. Students will explore the contribution of preeminent military theorists and battlefield commanders to our modern understanding of the art and science of war.

NAVAL SHIPS SYSTEMS II (WEAPONS) – This course outlines the theory and employment of weapons systems. Students explore the processes of detection, evaluation, threat analysis, weapon selection, delivery, guidance, and explosives. Fire control systems and major weapons types are discussed, including capabilities and limitations. The physical aspects of radar and underwater sound are described. Facets of command, control, communications, computers, and intelligence are explored as a means of weapons system integration. The tactical and strategic significance of command and control warfare and information warfare is discussed. This course is supplemented with review/analysis of case studies involving the moral and ethical responsibilities of leaders in the employment of weapons.

FUNDAMENTALS OF MANEUVER WARFARE (MARINE OPTION ONLY) – In this course, students cover broad aspects of warfare and their interactions with maneuver warfare doctrine. It focuses on the USMC as the premier maneuver warfare fighting institution. It covers historical influences on current tactical, operational, and strategic implications of maneuver warfare practices, including case studies. It focuses on the evolution of the USMC as a maneuver warfare organization, with particular attention devoted to the structure and capabilities of the present day USMC as a forward deployed and rapid deployment force and the development of Expeditionary Maneuver Warfare concepts. Enrollment preference is given to NROTC students.

NAVAL OPERATIONS AND SEAMANSHIP – This course is a continued study of relative motion, formation tactics, and ship employment. It includes introductions to Naval operations and operations analysis, ship behavior and characteristics in maneuvering, applied aspects of ship handling, afloat communications, Naval command and control, Naval warfare areas, and joint warfare. The course is supplemented with a review/analysis of case studies involving moral/ethical/leadership issues pertaining to the concepts listed above.

LEADERSHIP AND ETHICS – This course completes the final preparations of ensigns and second lieutenants for service in the Navy and Marine Corps. The course integrates an intellectual exploration of Western moral traditions and ethical philosophy with a variety of topics, such as military leadership, core values, professional ethics, the UCMJ and Navy regulations, and discussions relating to the roles of enlisted members, junior and senior officers, command relationships, and the conduct of warfare. The course provides midshipmen with a foundation of moral traditions, combined with a discussion of actual current and historical events in the USMC, to prepare them for the role and responsibilities of leadership in the Naval Service of the 21st century.